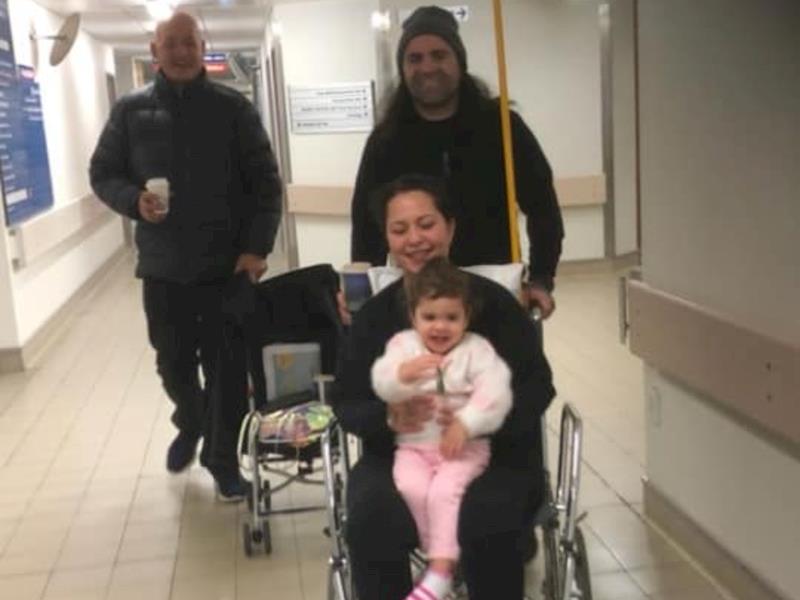 $1,300 donated
Given by 31 generous donors in one year
Closed

Courtney went for an appointment with her neurosurgeon the results came with devastating news ...

My name is Sophie Boulter and I am writing this on behalf of my Aunty Courtney.

On the 27th of June, 2019 Courtney went for an appointment with her neurosurgeon to get some results from a recent MRI scan. Along with these results came devastating news, five tumours were found throughout her body, four in her spine and one in her brain.

One of the tumours in Courtney’s spine was so large that she was told “it needed it be removed within a few weeks otherwise Courtney would become a paraplegic”. Courtney was in surgery to have this tumour removed four days later on the 1st of July, 2019 and had a 16 day stay in hospital, 9 days longer than thought.

Heartbreakingly, the surgery did not go to plan, the tumour was bigger than expected and attached to the spinal cord and as a result, Courtney’s surgeon had to remove part of her spinal bone, as well as cut one of the nerves to her left leg. Courtney now has no feeling in her left leg from her knee down which the doctors believe is permanent damage.

Courtney is now classed as being disabled. The movement in which Courtney can partake in is limited, she can still walk however, very slowly and not for long. Courtney is unable to readily access the stairs in her home, she is limited to travelling up and down them once a day, with assistance.

As a result of the disability in Courtney’s left leg, she is unable to lift anything over 2kg which means that she can no longer lift or care for their 20 month old daughter without the assistance of others.

As you may know, Courtney was an independent women fully able and never needing any help but as times are extremely hard, Courtney and her beautiful family are in need of any help that they can get. Currently, they receive no financial support nor in home help. Lugs has had to cut his working hours from 60 hours per week to 25 to become Courtney’s full time carer, Courtney was told by her social worker that as she has an able partner, she does not qualify for any help as Lugus is expected to work, cook, clean, as well as look after their three girls and Courtney.

The health system has failed Courtney and her family. Courtney is not covered by ACC as tumours are not an accident. However, she has since put in a claim for a medical misadventure but have been informed that it is going to be a long wait. Courtney and Lugus have tired lifelinks but have again been let down as there is no help in which they can offer as Court had already put a claim through to ACC. Courtney has tried reaching out to her iwi Ngai Tahu for help, only to be faced with a stressful application process, where some tasks are unable to be preformed by Courtney ultimately restricting the claims in which she can make. Courtney has also booked an appointment at work and income and have been classed as urgent, yet still has a months wait. Crest has been contacted however declined as they are only available to the elderly. Courtney has reached out to every organisation that was told to her however, was either waitlisted or declined.

This is the first of four operations for Courtney. Unfortunately, with the tumours that she has, chemotherapy and radiation is not an option, the only way forward is for the tumours to be removed.

Any financial support for Courtney, Lugus and their children would be greatly appreciated, this will go towards moving house as, the house they are currently renting is two-stories with the bedrooms on the top floor. As well, any money donated will go towards in home help, meals that come prepared, alternative therapys other than physio to help regain any feeling or movement possible and counselling for all her children and partner they are all so affected by this physically and mentally.

My name is Sophie Boulter, I am the eldest niece of Courtney Boulter.

Any financial support will go towards moving house, home help, meals that come prepared, alternative therapys other than physio to help regain any feeling or movement possible and counselling for Courtney's family.

Paying to a verified bank account of Courtney Boulter
Page Moderated The page has been checked by our team to make sure it complies with our terms and conditions.

Want to get in touch with Sophie Boulter?