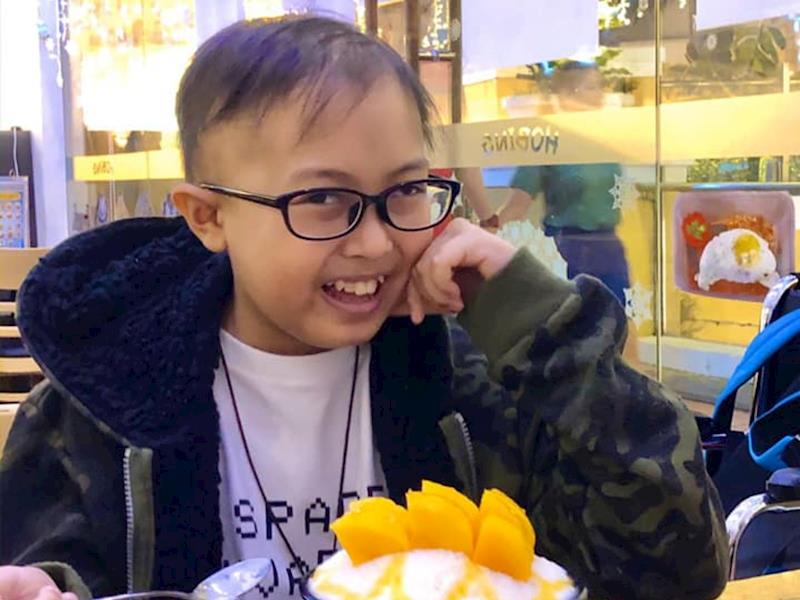 Cause page created in the Health category by Cris Gepiga for "Enrico Santino G. Urbano"

Given by 42 generous donors in around 4 months

Meet our brave warrior. His name is Enrico Santino Guzman Urbano. He will be 12 years old on December 17.

March 2016, our family received the most unexpected news. “E“ as we fondly call him was diagnosed with stage 4 brain cancer, medically known as medullablastoma. He has been fighting cancer for nearly four years.

We are blessed that he was never in pain in spite his collective and aggressive protocols for 44 radiation sessions and 31 chemotherapy cycles. We painfully watched and endured with him the rough journey of every cancer patient. And we rejoiced with him through the months as the Lord graciously blessed and rewarded him twice for being tumor free. Making him almost reach his 100% goal of being well.

Now 11 years old, he was again declared tumor free on December 5, 2018, but last March 21 (his Moms birthday), we are exactly at the same state he was three years ago. They were surprised to have found 4 new tumors in his brain and a spread of very small tumors down his spine.

We can’t even begin to find the words to express how painful this is. Looking at E, we see a boy perfect and whole. A boy who is fighting to be well and claims his healing through the power of Jesus Christ who has blessed him to come this far.

So amidst the pain and uncertainties, we choose to trust and not to be overcome with fear. We will continue to fight your cancer with prayer, your doctors and a lot of love.

This time, only chemo will be given to target both brain and spine. No more radiation because it can do more harm than healing. Please help us pray for E to respond well to the medication and be healed with the new protocol.

We thank you Lord God that you are sovereign and in full control. May we give you all honour, glory and praise as we go through this journey.

I (Cris Gepiga) am the Aunt of Enrico, my youngest brother's only son. I am helping to raise funds for Enrico's brain cancer treatment.

Funds will be dedicated for E's cancer treatments. This includes chemo medicines, hospitalisations, weekly tests, rehabilitation therapies & nutrition. E lives in the Philippines where funding for medical treatments is not covered by the government.

“Bless the LORD, O my soul, And all that is within me, bless His holy name. Bless the LORD, O my soul, And forget none of His benefits; Who pardons all your iniquities, Who heals all your diseases; Who redeems your life from the pit, Who crowns you with lovingkindness and compassion; Who satisfies your years with good things, So that your youth is renewed like the eagle.”

The past week has been challenging for E due to 3 days of being in and out of the ER due to difficulty in breathing. He would stabilize and be sent home. But he was growing weaker and would say things that were off topic. He even thought I was his teacher. After hours of observation, he was admitted to ensure he does not get dehydrated and to check possible causes for the obstruction in his airway.

While being confined, we continued to observe memory lapses and inconsistent thought processing. We were worried that it was a form of seizure. But his neuro-doctor assured us that it is not, his mind is affected by fatigue due to lack of good sleep as well. For now, they need him to rest , go through pulmonary therapy and a complete balance for his nutrition.

On the third day of confinement, he started having labored breathing in the afternoon. Doctors tried to relieve him by suctioning to decongest his lungs but oxygen level continued to drop. Due to the urgency, the emergency code team were in his room to intubate and hook him up on the ventilator then immediately transferred him to the PICU. Oxygen level was stabilized but heart rate and blood pressure were still high.

After running several tests, results showed a very high level of bacterial infection affected his lungs and eventually caused his pneumonia. We thank God for our team of doctors and nurses for being very vigilant in finding the best way to arrest and heal the infection.

From our family meeting with our doctors, we were warned of the urgency for the after-care of E. Since he is immuno-compromised, he cannot afford these infections and frequent trips to the hospital, much more the PICU. He is still recovering from his admissions back in September for seizures, brain surgery, respiratory infection and continuous chemo. And even if almost all his stats are almost always normal, his over-all health is not yet fully recovered. At the moment, his chemo treatment had to be cut short because he is still too weak. He resumes next month. He is also off the ventilator and we hope he can be transferred to a regular room soon.

Then in two weeks, a peg will be temporarily placed on his stomach to help us give him complete meals and give his medications properly. Right now, his nutrition is key and this is the most immediate action we need to take to help E recover faster. As parents, adding another gadget to his body is not a very comfortable decision, but for now, this is the best way we can help him.

Please pray with us that God will continue to protect the heart and mind of E to be resilient through all these challenging phases he continues to go through into his journey of healing. Again, thank you for keeping E and our family in your prayers. And if the Lord touches your heart to give a little for support and help for our compounding expenses, we will be forever grateful.

God bless you and your families.

Created by, and paying to a verified bank account of, Cris Gepiga on behalf of Enrico Santino G. Urbano
Page Moderated The page has been checked by our team to make sure it complies with our terms and conditions.

Given by 42 generous donors in around 4 months