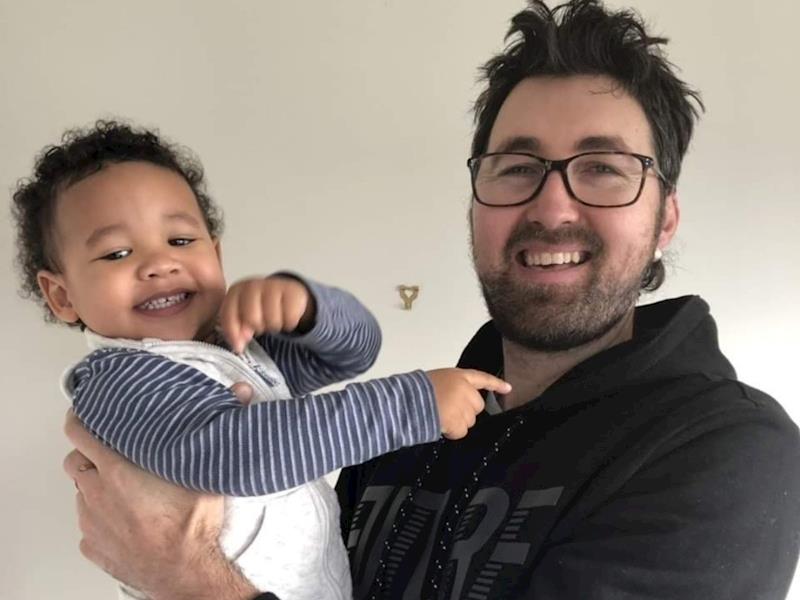 This is my brother David, some of you will know him as family or friends, classmates or colleagues, or maybe some of you have never met him, and although some may know his story, to some this may come as a surprise.

Three weeks after Dave's 34th birthday in October 2017, and after a few months of having numbness in his hands, Dave's weakness and imbalance rapidly developed into the whole right side of his body becoming paralysed. After initial thoughts that he had suffered a stroke, he was admitted to hospital where he spent the following two months undergoing multiple tests, scans, MRI's, a lumbar puncture and rounds of steroids. Still unable to move the right side of his body he was being fed, showered and shaved by his family and friends.

There were suggestions that he may have the disease Multiple Sclerosis, which was later confirmed. As a family, we didn't know anything about this disease, but after days and nights spent researching we learnt that this was an incurable and degenerative autoimmune disease that would eventually leave Dave in a wheelchair and potentially a much shorter life. Our family was heartbroken.

After receiving intensive and grueling rehabilitation, he regained feeling and movement back to his previously paralysed body. To our happiness, he was discharged in time to spend Christmas with his family, only to suffer another relapse one week later, and was admitted back to hospital where he spent another month.

At the time of his first admission to hospital, David had a five month old son, Christian, the light of his life, his first and only child. The thought of not being around or being able to participate in Christian's life was an unbearable pain for Dave.

The two years since Dave's diagnosis has been an emotional and physical roller-coaster for Dave and his family. Fortunately, Dave was approved for a government subsidy to receive monthly infusions of Tysabri, an intense treatment aimed at delaying the inevitable decline caused by this disease. However, during this time Dave was tested positive for JC-virus, a virus that about 80% of the general population carries, that can lead to developing a fatal brain disease, however people with a healthy immune system can often fight off this virus.

Multiple Sclerosis is often referred to as 'the invisible disease', meaning that its symptoms are not always obvious on the outside. Although Dave has severe speech difficulties as well as problems with strength and balance, one of his biggest hurdles is the chronic fatigue, weakness and poor cognitive function, being unable to undertake everyday activities that we all take for granted.

There was little hope in sight, until we started to hear of a treatment offered in Moscow, Russia, a treatment available to those suffering from autoimmune diseases. We discovered how many people from around the world had traveled to Russia to undergo the procedure to help with their multiple sclerosis. Their stories of success and their disappearing symptoms were a beacon of hope for Dave and our family, however it came with a $100,000 price tag.

It has been a long road of many many ups and downs getting to this point, but finally, Dave was accepted and invited to Russia to undergo the intensive treatment. On April 26th 2020, Dave will travel to Russia where he will be admitted to the National Pirogov Medical Surgical Centre and be in the hands of Doctor Denis Fedorenko where he will spend the following four weeks in isolation. Dave will have his stem cells removed, followed by four days of intensive chemotherapy, then have his 'clean' stem cells injected back into his body.

After returning home to New Zealand, Dave will have months of recovery ahead of him, but we cling to hope that Dave will be a part of the high success statistics of this treatment. A chance for Dave to get his life back, to become the father he so desperately wants to be, and to be well enough to go back to work.

So, we ask you, friends, family and strangers alike, to please donate what you can, to help Dave, a chance to regain quality of life and a sense of normalcy.

This stem cell treatment costs $100,000. Any excess will be donated to the Multiple Sclerosis Society of New Zealand.

Unfortunately, due to the corona pandemic, David was unable to go to Russia in April as planned. He will still be going as soon as international travel has resumed. Fortunately for us, it gives us a little more time to raise funds.

Kristyna on 15 Apr 2020
I truly hope Dave will get the treatment he needs. I wish all your family strength, courage and love ♡
$100

Paying to a verified bank account of Katheryn Helen Schulz on behalf of David Schulz
Page Moderated The page has been checked by our team to make sure it complies with our terms and conditions.