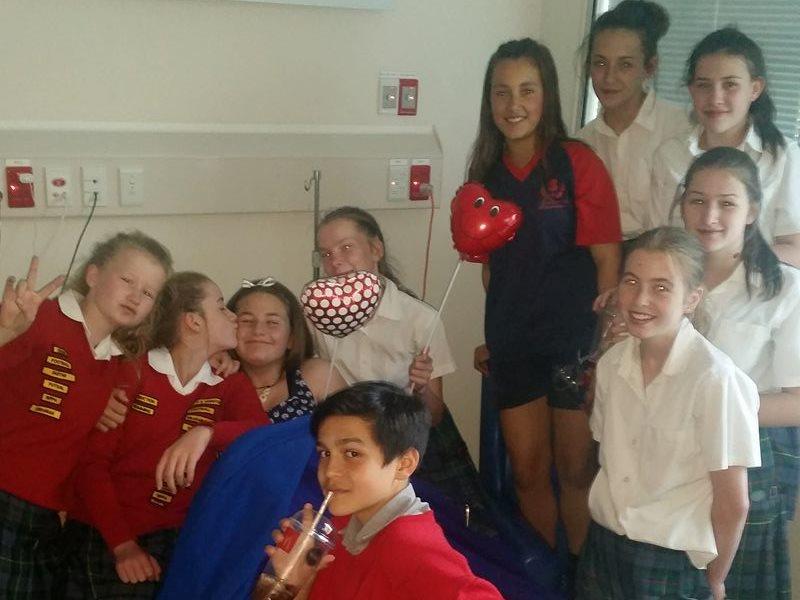 Given by 5 generous donors in 25 days

Helping the Dysart family get thru the long road ahead to recovery for whole family.

Nissy is an up and coming sports woman. She will be thirteen on Saturday 17th December. Four months ago Nissy was tackled playing a game at school had fractured her back. She ended up in the hospital for a week and was wheel chair bound for the next two and a half months. She was put on bed rest, which meant no school, no friends, and no sports. Prior to all of this Nissy was selected for the under 17’s and under 15’s women’s softball teams where she would have been representing Otago. She played grade A netball, rugby, and touch rugby over the last few months prior to the accident.

Over the last month and half, Nissy has been doing great. She’s started rehab, returned to school, starting hanging out with friends, but sports we’re still off the cards. This broke her heart. On Friday the 2nd of December, Nissy was given the most wonderful news that she was allowed to start non-contact sports again. She was told to take it easy, and had to follow all the rules. On the 10th of December, she was so stoked to play her first half game of Softball for Ellis Park and she had an absolute blast.

Unfortunately the fun had ended for Nissy when Mum (Debi) received a call from the school and was told that Nissy had been pushed in the back on the knee and landed on her back. Nissy was in excruciating pain once again. Coincidentally the family had returned Nissy’s wheelchair that morning, not knowing that they would be receiving the bad news. So back down to the hospital they went, X-rays and CT scans showed that the fracture was enlarged once again, and that an operation was on the cards.

Back before this all happened, the Dysart family had been planning their vacation to the North Island for a whole year. They were so excited for the Christmas Holidays to come so they could be reunited with their family they haven’t seen in over thirteen years. Parents Debi and Stan work extremely hard. Mum Debi runs a secondhand shop called the “Paper Bag Princess” in Dunedin. Dad Stan works long and hard hours at the wharf for C3. Usually Stan gets sent away for work for days at a time. With Nissy being hospital bound, Mum Debi is still trying to look after younger daughter Madi, while at the same time running and managing the shop, to coaching and managing five Ellis Park Softball teams.

On the 14th of December, the family had made a decision to cancel the family holiday in regards to Nissy’s accident. The family has worked so hard for the past year to be able to make this holiday away possible. With Stan working away so often over the last months, it was hard on the family. But, they had hopes that the end result was going to be completely worth it. Unfortunately now with cancelling the holiday, they need to think about how they can make a Christmas in the hospital seem okay. They have lost their full deposit that was put down on the fairy ride and all of their accommodations. The family has not yet gotten any presents because the holiday was the present. Both the girls new this and were excited anyways. The Dysart family motto is, “As long as we got each other, everything else with be okay.”

What we would love as friends of the family, if we could all come together and raise enough to money to give this well deserving family some time together. Time for Dad to take off, and for Mum too. Time is Unfortunately money and this is where we need all of your help. This time of year is stressful for all, so whatever you have to donate is greatly appreciated. Thank you for spending your time reading this and Happy Holidays to you all.

We are family and family friends

Created by Abby and Gabbie

Paying to a verified bank account of Debra Ellen (Debi) Dysart on behalf of The Dysart Family
Page Moderated The page has been checked by our team to make sure it complies with our terms and conditions.

Given by 5 generous donors in 25 days