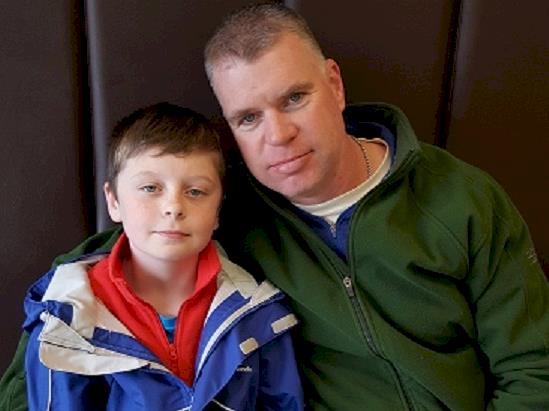 Help John fight his cancer to come home to his son

Given by 1949 generous donors in around 4 months

John was diagnosed with oesophageal cancer a month ago.He was given 6 months to live, no treatment options here.Treatment available in UK.

He survived a gang beating which left him with catastrophic injuries but now John Connolly is fighting his own battle against life-threatening cancer.

The police officer was off-duty and out walking his dog when he tried to break up a fight near his home in Tuakau in 2010.

John was seriously injured when he was hit from behind and knocked to the ground by a mob of more than 30 teenagers then repeatedly kicked and stomped. He was taken to hospital with a fractured skull, multiple facial fractures, a collapsed lung, broken jaw, and a broken ankle.

His injuries were so severe he had to be placed in an induced coma and colleagues feared he could die.

But British-born John proved them wrong and after undergoing surgery to have a titanium plate inserted in his skull he returned to his post at Papakura police station.

He was hailed a hero by the then Police Minister Judith Collins who said his actions had saved a girl’s life although John insisted he was just doing his job. “People expect us to do this, and I did.”

In June the 44-year-old got the devastating news that he had throat cancer and was told no treatment was available for him in New Zealand other than palliative care.

“It came as a complete shock and we couldn’t believe there was no medical help available,” said Liz Harker, John’s former wife and mother of the couple’s eight-year-old son William.

“His only chance is to return to the UK and pay for a private operation which is going to cost a small fortune. At the moment there is no way he can afford the treatment and I want to help with fundraising so that he can have the operation.

“John’s done so much for the community I thought people would like the chance to do something for him. His health has never been the same since the attack.”

We are the mother and step father of John's son

Thanks to everyone who gave here support to John and his battle with cancer. His treatment was going really well and he was due to have his operation early January but unfortunately a scan just before the operation showed it had spread. He managed to fly home to New Zealand to spend what Time he had with his son. On Friday the 8th of April he lost his battle.

Paying to a verified bank account of john connolly
Page Moderated The page has been checked by our team to make sure it complies with our terms and conditions.

Given by 1949 generous donors in around 4 months