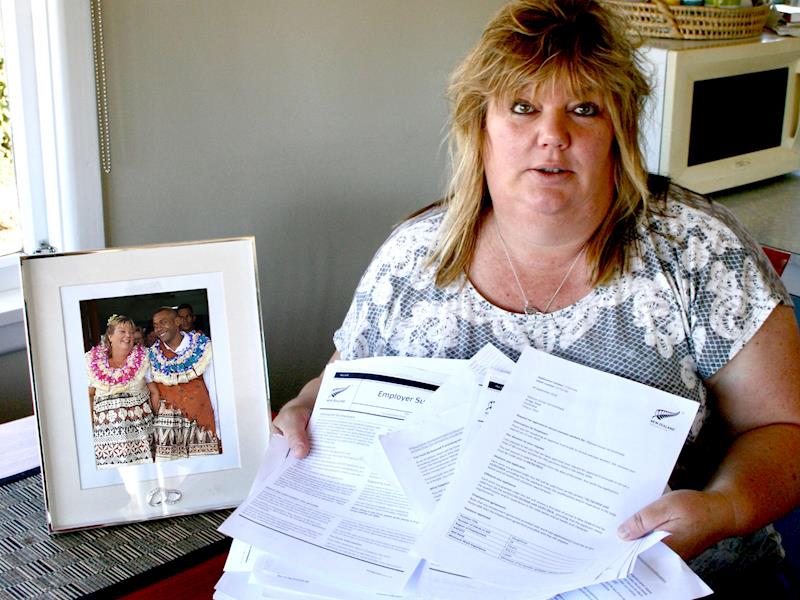 Sharon Turagakula is a well-known and respected member of our community currently unable to secure her Fijian husband Inosi's NZ residency.

Well-known Geraldine local Sharon Danford, as she then was, met Inosi Turagakula while on holiday in Fiji at the end of 2014. She says, “We became friends and kept in touch through social media. I went back in 2015 and met his family. He proposed the following year and we were married on 5 October, 2017, in his village on Levuka. It was a beautiful day we were outfitted in tapa cloth and had the traditional ceremonial walk through the village, ending with a church wedding. Our troubles began as soon as we applied for a visa for Inosi to come home with me. The New Zealand immigration authorities refused to give him a partner’s visa because they did not accept that we were truly married, citing there was no proof that we had lived together. For religious reasons, we had chosen not to live together before the wedding - now it felt like we were being punished for doing the right thing. 'Can we please have a visitor's visa then?' we asked. 'No, because you are married', was the reply. It didn’t make sense.”

Sharon had to return to New Zealand alone as there seemed no way to resolve this “Catch 22” situation. She says, “My Fiji family have given us so much. My sister-in-law has even named her baby after me. If I could I would go and live there, but my children’s education must come first.” Acting on advice, Sharon has tried to obtain a work visa, eventually obtaining a job offer at Alliance freezing works. The offer is an Approval in Principle (AIP). “Although we had all the paper work, immigration turned us down because he ‘did not meet the criteria’. The people at Alliance do not understand this because they say that he does. I went to Jacqui Deans, whose secretary was advised by email from immigration that we needed an AIP - but that’s what we have. So here I am with thousands of pieces of paper, completely stuck after going round in a complete circle twice. We must have spent close on $2,000 already on fees for documentation and the like. We are pretty challenged financially. I’d love to go and see him this year but just can’t afford it.”

The Geraldine News contacted Immigration New Zealand who were unwilling to speak on a specific case, but referred us to their media people who say that they will make a response when they have a privacy waiver from Mr Turagakula. The Geraldine News have since made contact with an immigration lawyer in Christchurch who says, "Yes, I can help with this." At this stage, funds required to achieve this goal are estimated to be around $5,000. Any surplus funds raised will help get Sharon to Fiji to visit her husband in the short term, and eventually to help relocate Inosi to New Zealand.

Sharon (Shaza) Turagakula is well known and respected member of our Geraldine community. She has been trying to secure New Zealand residency for her husband Inosi for nearly two years, but the process has ground to a halt. However an experienced immigration lawyer believes we have a case. As the new owners of the Geraldine News, Fi and Hugh McCafferty wish to establish a ‘fighting fund’ to help Sharon take this process further.

Funds raised will be to enable Sharon and Inosi to engage an immigration lawyer. Any surplus funds will help get Sharon to Fiji to visit her husband in the short term, and eventually to help relocate Inosi to New Zealand.

In view of the previous announcement we are closing the page. Once again thank you for your wonderful support of Sharon and Inosi.

Paying to a verified bank account of Sharon Danford (Turagaluka)
Page Moderated The page has been checked by our team to make sure it complies with our terms and conditions.