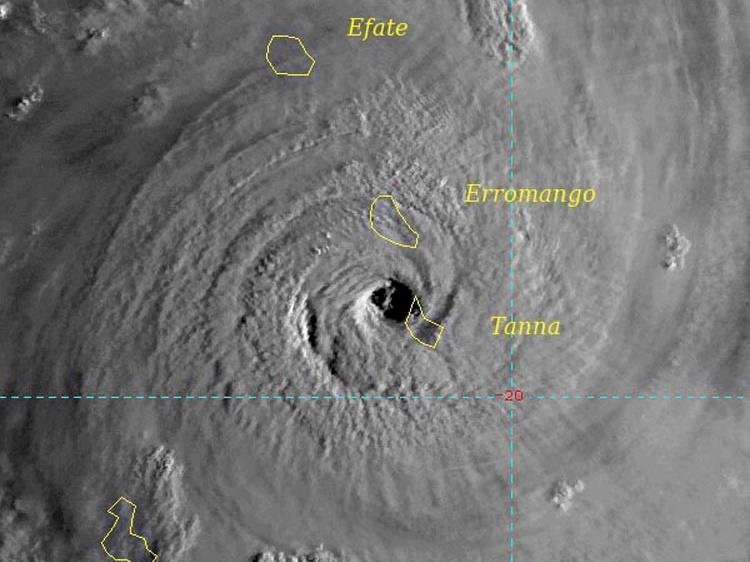 $5,756 donated
Given by 14 generous donors in around 3 months
Closed

Iahlu’s Tanna village has lost their gardens & has nothing to rebuild their homes with after TC Pam destroyed everything!

Tanna Island took the worst punishment from Tropical Cyclone Pam, due to the fact it was hit by the stronger southeast eyewall of the storm with winds of 155 mph (see pic). George lives in the village of Laounaoula (pop 120) on Tanna Island, Vanuatu.

My brother Adam arrived on the 21st March and found all the local bush homes have been destroyed, so the villagers have no homes. All the trees have lost their leaves, and gardens have been destroyed, including the fact that all the root crops (their main food source) have been spoiled, so they have no food other than some bananas, and aid still hadn't arrived by 30th.

Many face difficulties, particularly solo women like one lady whose husband deserted her years ago so she lived in a bush house on her father’s land in the village, with her 4 children who she has raised on her own from her garden. She has no income or support, there is no social welfare system, and she has struggled. Now because of Pam she hasn’t a home or a garden. There are a number of mothers in the same situation in the village.

Our family met George while he was fruit picking in NZ 6 years ago. George became a Christian and his life changed dramatically. His village is situated on the plateau on Tanna Island in a place called Middle Bush, where women and children collect their drinking water from steep bush ravines several times a day for their families. They had had many experts visit the village and tell them it was impossible to provide a solution to their water requirements, but my brother Adam designed a ram pump, and after a lot of hard work, the village has now had safe water pumped to tanks in the village. Of course then, many other villages wanted water, so the work went on. George worked hard servicing the pumps and helping Adam install them. He proudly carries his own business card with John 4:14 stamped on it. Many others in the village found the Lord so a lot of the work they did voluntarily, sharing the blessings they had received themselves. Then UNICEF and NZ Aid became partners and a 3 year project to install systems in 31 villages commenced in 2014. George managed to save and build a block house and moved in just 2 days before TC Pam hit. His house was the only home in his village to survive with its roof – it was this building which kept his family and other villagers safe in 155 mph winds.

The gallery pictures show before and after pictures.

Official relief reports say 70% of the housing on the island is destroyed, and there are acute shortages of food and clean water. In George’s village 95% of the housing has been destroyed. So when some have asked us if his village needs help. The answer is yes.

George’s favourite scripture is Isaiah 40:31, and he told Adam when he arrived despite the devastation they can see how the Lord is good - they are safe.

Any funds raised for George’s village will go towards initially any immediate needs like food, then rebuilding family homes particularly for the solo mothers in the village who now have nothing, and no support.

I am fundraising for George Iahlu's village, Laounaoula on Tanna Island. My brother Adam and I have known George and his wife Madeleine for 6 years and have stayed in the village before TC Pam. There are people in George's village who now have a desperate need, including food and shelter, especially the solo mothers and children.

As a third food parcel was received recently, we asked George what he thought would be best to do with our funds, who said shelter is priority for the women and children.

Although treated timber is expensive along with roofing iron given the freight required to get to the island, we have worked out we can afford to build 3 'sleeping houses' for three families in much need. Yarwel with 4 children, Batari with 7 children, along with Naomi who is an elderly lady in a very poor village with 2 grand daughters living with her.

These ladies are thrilled to hear the news given they have lived their lives in local grass huts with dirt floors, so these will be their first real homes. Adam is heading over to Vanuatu to construct them in July. The plan is for 3 A-frame style houses, a new style for most, but a strong style which will provide for a mezzanine floor with extra sleeping space, although to stretch funds there will be some local materials used like bamboo. It also is similar to their custom cyclone houses, and the airport building on the island which is also A-frame and built for cyclones.

Our grateful thanks again for your support, which will be such a blessing for these families.

Walsh family on 13 Apr 2015
Wishing that through your amazing work and support and the resilience of the people on Tanna, their lives will be made all the more bearable and hopeful in having to start again.
$50

Created by, and paying to a verified bank account of, Lisa Pearse on behalf of George Iahlu's Village
Page Moderated The page has been checked by our team to make sure it complies with our terms and conditions.

Want to get in touch with Lisa Pearse?