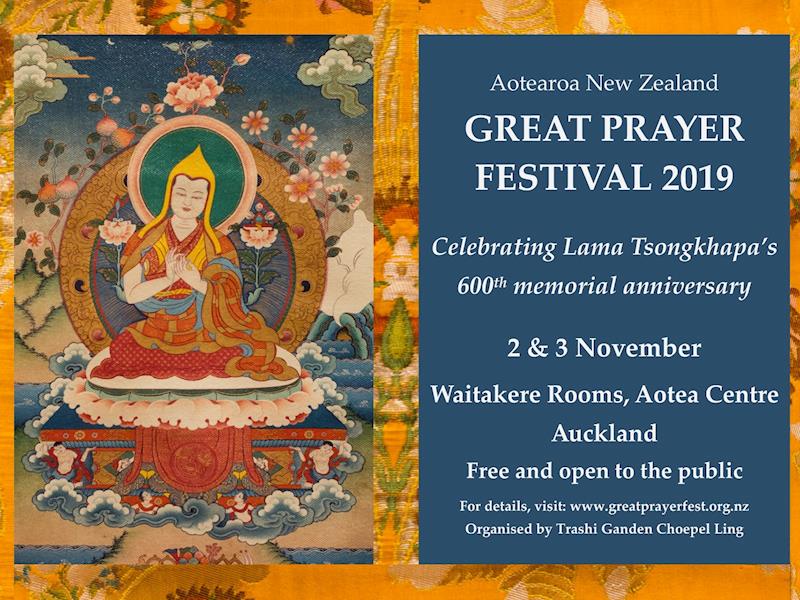 Trashi Ganden Choepel Ling Tibetan Buddhist Centre is organising the Aotearoa New Zealand Great Prayer Festival 2019 to commemorate the 600th anniversary of Lama Tsongkhapa's passing. The Festival will take place from 2-3 November at Aotea Centre, free and open to the public. Lama Tsongkhapa is the founder of the Gelug tradition, one of the four major Tibetan Buddhist traditions, and among the greatest Buddhist masters of Tibet. He started the tradition of holding Great Prayer Festivals in 1409, dedicated to the flourishing of the Buddha's teachings and for the happiness of all sentient beings. To honour his legacy of enlightened compassion and wisdom, we would like to follow his example by gathering people to make vast aspirational prayers as taught by the Buddha, and the great Indian and Tibetan masters. The Great Prayer Festival will also feature talks, guided meditations, and displays of Tibetan Buddhist arts. For more information, please visit www.greatprayerfest.org.nz

Trashi Ganden Choepel Ling is a Tibetan Buddhist centre in Glenfield, Auckland. We are raising funds to host the Aotearoa New Zealand Great Prayer Festival to mark the 600th memorial anniversary of Lama Tsongkhapa at Aotea Centre from 2-3 November 2019.

The funds will be used to cover costs of venue hire, equipment, offerings, promotion, meals and donations to attending Sangha, printing of prayer books, and other expenses related to the Festival. Any surplus funds will be put forward to future festivals.

Created by, and paying to a verified bank account of, Trashi Ganden Choepel Ling Trust (Charity)
Registered Charity A Registered Charity has legal recognition under the Charities Act 2005.
Tax credit Donations of over $5 are eligible for a New Zealand charitable giving tax credit.
Page Moderated The page has been checked by our team to make sure it complies with our terms and conditions.

Want to get in touch with Trashi Ganden Choepel Ling Trust?