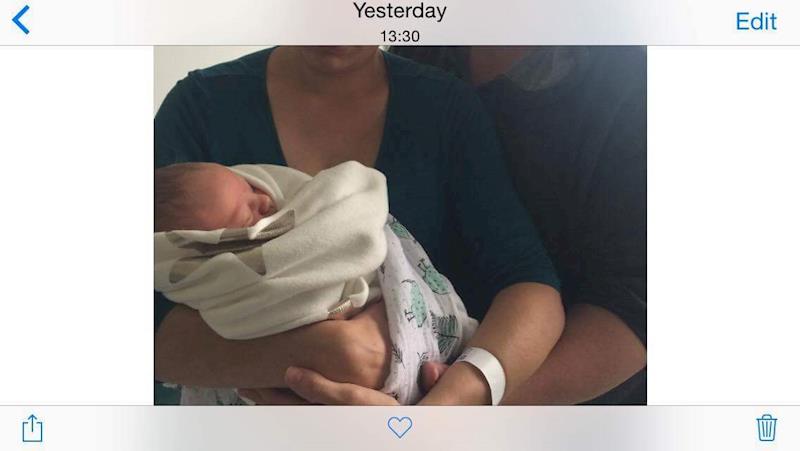 Given by 71 generous donors in 12 weeks

Two parents saw the uplift of their new born baby today at North Shore Hospital, in Auckland. Baby L who cannot be named for legal reasons.

Two parents saw the uplift of their new born baby at North Shore Hospital in Auckland on Friday 29 September. Baby L who cannot be named for legal reasons was born on Monday 25 September with a 5 day uplift order and was taken from his parents arms on Friday by social workers who arrived with a car seat for baby L.

The parents delivered their first child 14 months ago with a broken collarbone after the shoulders got stuck during the delivery. The parents described their baby as having grey eyes and knew something was wrong with their baby girl. The father wept as he talked of knowing that his daughter was coughing in pain but felt he was not being heard or listened to; being dismissed with, "it is quite normal".

Concerned that their daughter was not thriving they took her to the hospital at 4 weeks old and X-rays revealed several broken ribs. CYFS removed the baby from the distraught parents who described the trauma as one of the worst experiences a parent could live through. The baby however was later diagnosed with OI (Osteogenesis Imperfecta), a rare inherited disorder characterised by bones that break easily, more frequently known as Brittle Bone Disease. Grey/blue sclera are one of the signs of this condition. Despite the diagnosis received in August, the little girl remains in foster care.

Although it is well known that sometimes the bones of OI children break for no known reason, the accusation that one parent possibly harmed their baby still stands today and as a result an order was made for the removal of the second child.

The Osteogenesis Foundation in America has produced much research into OI and fact sheets are given to parents detailing the care of their infant. It includes 12 instructions on the handling of the baby, including:

-Infants with OI should not be picked up around the rib cage because this can cause rib fractures.

-When diapering a baby do not lift the infant by the ankles as this could result in a fracture.

-When dressing the infant bring garments over the limb, do not pull the limb through the sleeve or pants leg. King the limb can cause a fracture.

The parents say they were not offered this information not any support or counselling when their child was taken and although hoping the diagnosis would affect the outcome of their circumstances, no further help has come. In addition the mother who is Afrikaans speaking has not been offered an interpreter at conferences and hearings and so much of what she has expressed has been misinterpreted and misrepresented in the report writing.

Their 'support person' was with them in hospital at 1pm when baby L was removed. She describes the uplifting as "deeply disturbing and traumatic for the parents and all involved with the family". The nurse who had been present for much of the 24/7 observation during the past 5 days said "This is dreadful. I have watched these extraordinary parents bond with this baby and the parents do not deserve this. This is terrible."

Their support worker has supported many parents who have had children removed through BBD or cot death allegations. She says not enough has been done for this family to support them or help prove their innocence. In her book published in 2015 'Taken' , she says "In criminal law one is guilty until proved innocent and yet in family law when an allegation is made about a parent harming a child, that parent is guilty until they can prove their own innocence. Many however cannot do so because of the legal costs involved."

The OIF fact sheets advise on child abuse: "False accusations of child abuse may occur in families whose children have milder forms of OI and/or in whom OI has not previously been diagnosed. When the fracture seems incompatible with the reported cause of the injury, child abuse is often suspected.'

The concerns raised by Oranga Tamariki, the new government department for vulnerable children in NZ, directed that baby L be removed from parents because 24/7 supervision could not be provided.

The family's support worker says the legal fees are crippling the family and is asking that the public rally around to help this young family. "It seems that the system one finds oneself in as a vulnerable person only exasperates the pain and suffering of the individual" she says.

"The hardest thing for me was hearing the father weep as he expressed concerns should they seek counselling for trauma and depression if it keeps on after today. He described wanting to get help for his wife and himself but was in fear to do so in case it be used against them later in fighting to get their children home. He described how his words had been twisted in the past and he was fearful of now speaking honestly."

Their support worker says that's why the community must now step up and individuals must start to speak out. She says she is in contact with over 3000 parents around the world through Facebook sites and her website and the grave suffering of parents has become intolerable.

Any help to bring this young family's babies home will be greatly appreciated.

I am helping a family member and her husband to get their babies back home.

All funds will go towards legal fees and the gathering of further medical and legal information needed.

Created by Bring our babies home

Paying to a verified bank account of Graham and Catherine
Page Moderated The page has been checked by our team to make sure it complies with our terms and conditions.

Given by 71 generous donors in 12 weeks