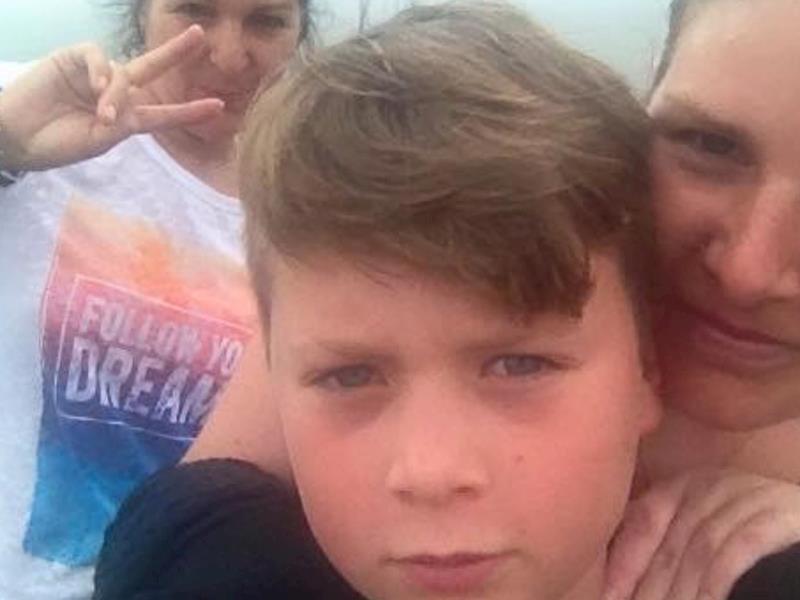 Embraced by an Angel

Given by 233 generous donors in around 4 months

To tell Michaela's story in the hope of offering her support now and in the future. Possibly formulate some funding for others in need.

Hi Everyone, thank you for logging in to this give a little page that I created for Michaela a couple of weeks ago, initially because her son Vinnie ( 14 years old) was missing presumed drowned at St Clair beach. I am Michaela's cousin, Kathy Peters, however Michaela was like my other daughter. I am hoping you read her remarkable story and find it in your heart to think of her compassionately and with the utmost respect AND also possibly contribute to her give a little page.

Her story is outlined below, and she would hate that people felt sorry for her but more acknowledge the tragedy that has now befallen her and all of us with the loss of Vinnie, our beautiful blue eyed boy with the " old soul".

Sadly Vinnie was found at St Clair Beach, Dunedin on Sunday 26th at around 9am on a beautiful sunny day. His body was found by myself and two members of search and rescue. We were quietly observing the water and cliff. I had been taken out by search and rescue to get an overall picture of the scene from the water. This was to try and make sense of things and to also convey things to Vinnies Mum, Michaela who was unable to visit the clifftop or see the scene due to her lack of sight. The search was due to be scaled back later that day.

I along with members of the family, Vinnies father ( Steve) and friends had already visited the sight at the top of the cliff numerous times since Vin went missing on the Thursday.

It is reported that Vinnie had fallen accidently into the water off an area on the steep cliff while trying to scale up the cliff. He had originally jumped with at friend into the water from the cliff top and rather than let the current take him back around to repeat the process, the boys decided to climb up the cliff face.

Vinnie was found in the exact spot where he entered the water and there is no doubt that area had been searched thoroughly by all means, including divers. It had been re- searched that morning prior to me coming out on the water. I have no doubt, as do search and rescue, that Vinnie waited for his family/ Whanau to come out to him and bring him home him home safely.

Vinnie will be greatly missed and was a much loved son, not only of Michaela but of his father Steve and extended family and friends.

This " Give a Little" page has been compiled SOLELY to tell Michaela's Life story and to raise funds for her after the tragic loss of Vinnie.

Please feel free to contact me on kathpeters21@gmail.com or 0223093300 if you require any further information.

The ability, as humans, to be taken to the lowest point of heartbreak and tragedy but survive and still have hope, is the story behind this courageous woman, Michaela B.

Michaela's son is currently missing presumed drowned and for a mother to lose a child is a pain no one should have to endure but she remains strong in her belief Vinnie will be returned to her.

But Michaela is no " normal" grieving mother. She has a traumatic brain injury which caused her to lose her sight ( legally blind). Six years ago nearly to the day that her son has gone missing, she suffered critical injuries in a car accident when her car left the road on the way home from work on the outskirts of Christchurch. A small family rallied around her and it was suggested that all life support be ended. The medical team were persuaded to put this decision on hold and once they were privy to Michaela's "story", they understood the need to keep hoping for miracle. They were assured by those that knew Michaela best, that if anyone could survive, it would be her.

In some ways, ironically, she had been down this road before, but on previous times, it was her precious parents in a hospital bed, not her.

Without drawing the story out too much and to ensure the focus remains on Michaela and what support we want to achieve for her....Here in brief is the rest of her story.

Michaela and her brother were the children of Karen and Dave. The family played together and the sea was a big part of their life. The family simply did everything together and led a life balanced by hard work and making the most of their time together. Michaela and her brother were young when Karen discovered she had breast cancer, she ensured the children were sheltered from this and any hint of their Mum dying or fighting the disease, were hidden from them. Sadly she died at the age of 39 after battling the disease quietly and without any indication from those closest to her, that the cancer had engulfed most of her body. Eventually, after a couple of years, Dave and the children began to start to live life without their beloved Mum. Dave, who had lost his soulmate began to take the children away and get back in and around the water again. However, unbelievably, tragedy struck again. While diving in the waters of the upper south island, Dave surfaced and was suspected of having the bends. Taken to Christchurch by emergency services it was soon discovered that Dave had sustained a fatal cerebral haemorrhage, he was put on life support until family members could be with Michaela and her brother. Michaela was around 14 at the time and made the decision that she wanted to donate her father's organs and that process began while he was kept on life support.

Dave died after this life support ended and his organs retrieved for donation. He was 43yrs of age and left the children orphaned.

Over the years the children lived in different households, not together and eventually lost contact and the bond that had tied them as a family. They floundered in their grief and went through life very much alone, struggling to make sense of their loss.

In her early 20's Michaela gave birth to her son Vinnie and he provided the joy and hope she had lost in her life. Her dedication as a mother and her struggles to provide for Vinnie were huge but her strength, guts and determination gave her that fighting spirit that we all knew she needed to survive after the car accident... and she did... Two months in ICU, 4 months in hospital. Michaela has been able to be at home with the help of support workers and Vinnie was her reason for living after the accident. Michaela who once was fiercely independent is unable to go out alone, needs someone with her to shop, exercise and generally take care of herself and the household.

At the time of Vinnies accident, Michaela, like every mother of a teenage son, was doing her best, within her capabilities to love, support and protect her son.

So this was Michaela and Vinnies story in brief but Michaela is and has always been proud and strong, so although she is aware and supports the formation of the " give a little" page, her ability to manage and get through life as independently as possible, will continue.

Firstly use funds for costs incurred with the loss of Vinnie, moving forward, if he is not found, a memorial. Michaela is unable to work, have her own home so help with a holiday. Also set up a foundation to assist those most in need ( head injury/ youth)

Vinnie’s body was found on the Sunday, he went missing on the Thursday. His funeral was held in Dunedin yesterday 30/ 1/ 20. Michaelas accident happened in Christchurch 6 yrs ago today (31/1). The administrators of the give a little page have naturally asked for all facts to be transparent so donators to the page are fully informed and Michaela and I fully support this. ACC and WINZ provide an income for Michaela and she was paid a contribution 4 years after her accident. This money was paid to cover her son Vinnie’s funeral. No other contributions were offered to Michaela at that time. However, we understand that at this time there may be a chance that Michaela receives some contribution from ACC for the funeral but to date Michaela has fully paid personally nearly $14,000 for her own sons funeral. Thank you from our hearts for all contributors so far and what may possibly be given in the future either from family, friends or strangers.

Created by, and paying to a verified bank account of, Kathy Peters on behalf of Michaela Beecroft - Mother of Vinnie Beecroft
Page Moderated The page has been checked by our team to make sure it complies with our terms and conditions.

Given by 233 generous donors in around 4 months