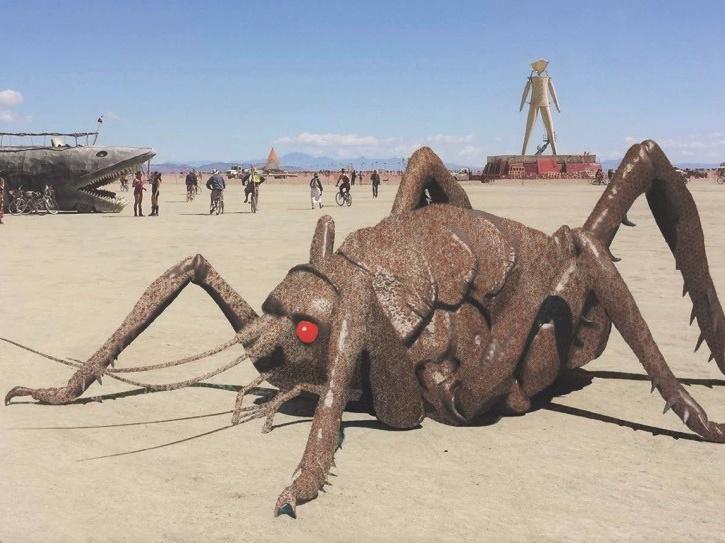 $1,500 donated
Given by 22 generous donors in around 5 months
Share Closed

The Giant Weta is a 2016 Black Rock City Honoraria project from New Zealand to bring a large steel weta to Burning Man, Kiwiburn and beyond.

Older than some dinosaurs, the endangered Giant Weta needs your help! Not known for it’s beauty, the world’s heaviest insect is heading to the Playa this year as an art project led by Auckland Burners.

To craft it out of metal, create flame effects shooting from its antennae and transport it there, then back for Kiwiburn, they need your support! Get involved!

The money raised in this crowdfunding campaign will be used for:

• Steel for constructing the weta

• Shipping costs to the USA

• Rental costs for our build space

WHO ARE AUCKLAND BURNERS?

A group of Kiwiburners from New Zealand’s largest city. As a collective, they have collaborated to select, design and build an interactive art piece to take to Burning Man, Nevada, in 2016. The group were keen to build a uniquely New Zealand structure to take to Burning Man. The Giant Weta is native to NZ (their genus name, Deinacrida, is Greek for “fierce grasshopper”). Also endangered, they are examples of island gigantism. The uniqueness of the insect along with the interactivity incorporated into the Artwork will enable participants to connect with a part of New Zealand whilst on the Burning Man playa.

BUT WHAT IS BURNING MAN?

Once a year, tens of thousands of people gather in Nevada, USA’s Black Rock Desert (also known as “the playa”) to create Black Rock City, a temporary metropolis dedicated to community, art, self-expression, and self-reliance. They depart one week later, having left no trace whatsoever.

Kiwiburn is New Zealand’s annual regional Burning Man event. It is the longest running international regional burn and saw 1,600 participants in 2016. The theme for the 2017 event is “The Robots are Coming!” and is set to be another amazing event.

The Giant Weta is a project of Auckland Burners.

After a few weeks at sea, the Weta arrived on American soil and has been at the Generator Art and Build space in Reno, Nevada to start the final phase of the build part of the project before heading to Black Rock City.

It’s not long until 40+ New Zealanders gather together on the playa of Burning Man, showcasing their art installation to the world in all its flame-shooting glory!

After many months of planning, logistics and building the largest art installation by Kiwiburners in New Zealand, the team should be very proud.

Congratulations to the team – what an amazing achievement for Auckland Burners!

Thank you for your donation!

Created by, and paying to a verified bank account of, Auckland Burners (Group)
Page Moderated
The page has been checked by our team to make sure it complies with our terms and conditions.

Want to get in touch with Auckland Burners?