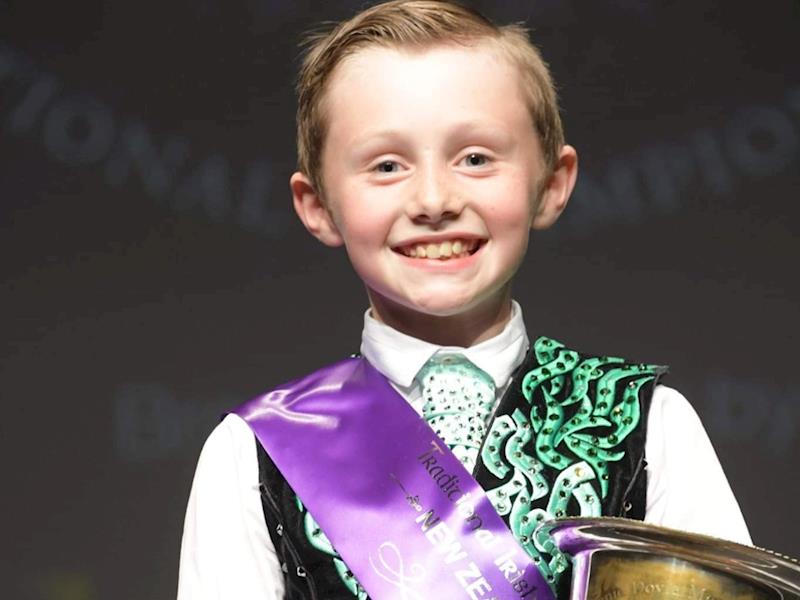 Cause page created in the Creative category by Hilary O'Brien-Anderson

Finn Anderson has been dancing with Southern Cross Irish Dance in Christchurch,New Zealand for over 3 years. He is the current New Zealand Champion in the 7 to 9 age group .He also came first in the Capital City Feis in Wellington and the National Feis in Christchurch and placed in the Christchurch Competition and Claddagh Feis.

His online video of Irish dancing to Uptown Funk, a dance he improvised and placed first at the contemporary section at the Capital City Feis has gone viral. It was filmed at The Bog irish bar in Christchurch where he dances once a month with the rest of his school. Michael Flatley himself posted it on his Lord of the Dance and personal page and invited him to audition for Lord of the Dance when he's old enough!

This year Finn has three local competitions to compete in, two in Wellington including nationals and one in Auckland but also his first major overseas competition on the Gold Coast in July.

Finn hopes to qualify for his first world championship which would be held in Killarney, Ireland in 2021! Therefore it's really important Finn gets as much experience this year in local competitions.

We will do as much fundraising ourselves as possible with Finn busking in cathedral square, movie nights, sausage sizzles etc. but unfortunately that won't be enough. If anyone feels they would like to contribute to this we would be so eternally grateful.

Anyone who knows Finn will be aware Irish dancing is his absolute passion and has helped him so through some very tough times and he is very determined to achieve his ultimate dream of becoming a professional Irish dancer.

Thank you so much

Irish Mammy in NZ on 16 Jan 2020
Go Finn, what a joy he brings when he dances, may he always have that spark within whatever he turns his hands or his feet to!
$16
Hilary O'Brien-Anderson

Thank you so much irish mammy x

Thank you so much Ericka x

Created by, and paying to a verified bank account of, Hilary O'Brien-Anderson
Page Moderated The page has been checked by our team to make sure it complies with our terms and conditions.