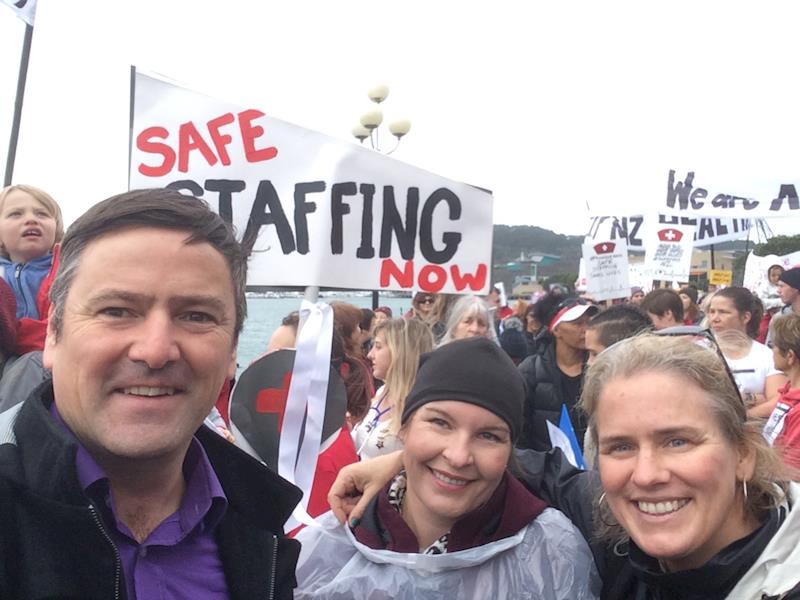 Help Grant Brookes retain his position as NZNO President. Money raised will help pay legal fees and keep him working for our union.

Grant Brookes is the popularly elected President of the New Zealand Nurses Organisation. As a nurse and one of the 51,000 members of our union and professional association, I respect and admire Grant for the work he has done for our union members over many years, and for the way he consistently stands up for other unions’ members and for the disadvantaged.

Last year, those of us employed by District Health Boards took strike action for the first time in thirty years. As we campaigned for investment in the fair pay and safe staffing needed so our nursing and midwifery teams could rebuild New Zealand’s health system, Grant stood shoulder to shoulder with us.

The pressure of those historic events strained relationships. Despite Grant’s huge efforts over the last year to overcome and heal the divisions, he was forced to engage a lawyer to defend himself against unwarranted attacks.

Grant stood with us. Now it is our turn to stand with him.

He did not take the easy out of quitting or agreeing to be a silent figurehead. He has risked so much to help members have the union they wanted. And if you believe in that vision too, it would be great if you can support this cause in some small way.

With elections currently under way for a new NZNO Board, outgoing Board members are using questionable means to try to remove him from office on the 16th of September, their last day in power. This has now been reported in a media article linked below.

Please donate to Grant’s legal defence fund so he can overcome this illegitimate act and continue to stand up for us and for the health of our communities.

Below are Grant’s answers to questions emailed to him on Sunday the 16th of August.

1 Why did you hire a lawyer?

On 13 July 2018, I got a letter from the NZNO Board of Directors. The letter informed me that the Board had met via teleconference two days earlier and had “reached a provisional decision to suspend you from your duties as President.”

That was the first communication I received about a complaint against me from an NZNO staff member. Details of the complaint have been published in an article on the Stuff website.

These actions by the Board were unconstitutional and without just cause. Under the NZNO Constitution, the Board does not have the authority to suspend an elected President.

I engaged a lawyer, Greg Lloyd, initially to support me in resolving the issues through mediation. When the Board refused mediation, legal proceedings were commenced under Section 161(k) of the Employment Relations Act 2000, on the grounds that the Board had failed to comply with the union’s rules, and also that it had breached its obligations to deal in good faith with me, as a union member.

I recently dropped my legal proceedings after I was provided with the report of the independent investigation into the 2018 DHB MECA bargaining, conducted by Ross Wilson. I wanted to be able to commit fully to implementing its constructive recommendations.

Now that the Board is carrying through with what appears to have been its original intention, to remove me from office, more legal work will be needed.

2. Are you paying your own legal fees, as reported in the May issue of Kai Tiaki?

Yes. From the day I first engaged Greg Lloyd to represent me on 16 July 2018, I have paid all my own legal fees.

3. How have you managed to afford this up until now?

Before being elected as NZNO President in 2015, my career had been spent as a Staff Nurse and Community Mental Health Nurse. During my first three year term from 2015-2018, I honoured my election pledge to accept only Staff Nurse pay for the role of President, while working to empower members

Because of this, I have been unable to build up savings.

I have been extremely fortunate that Greg Lloyd has charged a discounted fee. The total amount I have paid to date is $18,652.50, although there are further invoices yet to come.

I have managed to pay the bills so far by going to the bank with my partner and extending our home loan.

4. How much has the NZNO Board spent on lawyers in their dealings with you?

I am not able to disclose that information. But the NZNO Annual Report, which is available to all members on the NZNO website, shows that for the year to March 2019 legal expenses for the organisation as a whole were $570,816 over budget. This amount does not include the costs of the medico-legal and employment lawyers employed by NZNO. The size of any contribution towards that overspend incurred by the Board in their dealings with me is something that would have to be sought from the NZNO Chief Executive. Bear in mind also that Board spending has continued since March.

The lawyer representing the Board has stated that they will be seeking from me a contribution towards the Board’s legal costs.

I'm a concerned NZNO member, who wants Grant Brookes to continue to represent us. I have known & worked with Grant in my role as workplace delegate & convenor for nearly 20 years. If a DHB sacked a member in these circumstances, there would be hell to pay.

All money raised will go towards Grant's legal fees in fighting to retain his elected position as President. Note that Grant has already extended his mortgage to defend himself, and costs continue to mount.

After a difficult year, both Grant and the new NZNO board want to move on and overcome the divisions that have split members and our union.

Grant and his family are hugely grateful for the support shown by members, and for the money raised to help him with legal fees.

Grant believes the focus now needs to be on overcoming division and rebuilding the trust of the membership in the leadership of the NZNO.

The new board has agreed to his proposal for withdrawing the legal proceedings, on the basis that all outstanding matters are now at an end.

So as the holiday season nears, let’s all focus on reconciliation. We’re all in this together and working together will make us a real force again.

Guest Donor on 18 Sep 2019
Best of luck in your fight Grant!
Private

Paying to a verified bank account of Grant Brookes
Page Moderated The page has been checked by our team to make sure it complies with our terms and conditions.

Want to get in touch with Erin Kennedy?