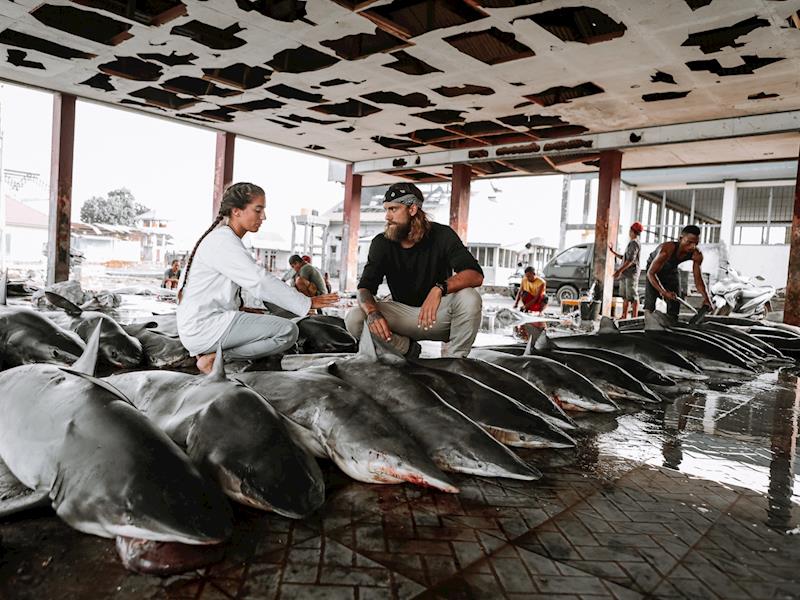 ‘Project Hiu’, Hiu being the Indonesian word for Shark, is an initiative which aims to provide alternative income to fishermen in one of the largest shark fisheries in Indonesia, and the world. Founded by National Geographic award winning conservationist Madison Stewart; she has dedicated her life to this project, reducing demand for shark products, and providing alternate sources of income for fishermen. By hiring the shark fishing boats and locals that man them, we sought to engage the fisherman in a very different role. Tourism. A natural, alternative income that simultaneously and effectively protects sharks. Project Hiu is founded on the recognition that the very solution to saving sharks, lay with the men raised to kill them.

This small village and the fishermen we work with represent far more than a simple project, they represent the preservation of a vast ocean that connects us all, and an opportunity to drive a wedge between the hard working, often desperate fishermen and the foreign buyers who profit from them. We also address the need for our presence to benefit the entire community. An incentive for a whole village to choose tourism over fishing, we re-invest project capital, which in turn aids community development projects such as waste management, and education programs. The goal of Project Hiu is to improve conditions above and below the surface, and enforce the idea that one person, and one shark fishermen, can make a difference.

Accompanying our eco-tourism model, we also aim to focus on addressing the intangible root cause of this underlining crisis, the demand and poorly regulated shark fin trade.

By supporting Project Hiu you will be helping equip a team of filmmakers and scientists to expose and monitor threatened marine species, unethical operations and over fished ecosystems.

Project Hiu aims to address this issue by educating the end consumer on two main issues, the toxicity of shark meat and the profound strain and detriment being inflicted to livelihoods above and below the surface as a result of existing demand.

In 2020 we had planned to film a one of a kind documentary. With COVID; we had to evacuate just before filming could commence. In the long term; COVID has meant that tourism halted. Without this source of income to fund documentaries and other efforts, we need your help to expose this trade and create worldwide change. Project Hiu and Madison Stewart are recognised pillars in this industry; the reach with this film has potential to make huge waves and with your help, reduce demand for shark products while simultaneously improving the lives of fishermen exploited by the trade.

Funds will be used to film and distribute a groundbreaking documentary exposing the truth of the shark fishing industry. Including renting out the shark fishing boats for filming, renting equipment, software costs, costs to distribute the film and screen, etc. Any unused funds will stay within the charity to teach educate children, improve health care and living conditions on the island.

Created by, and paying to a verified bank account of, Caragh Fraser on behalf of The Hooper Collective / Project Hiu
Page Moderated The page has been checked by our team to make sure it complies with our terms and conditions.

Want to get in touch with Caragh Fraser?