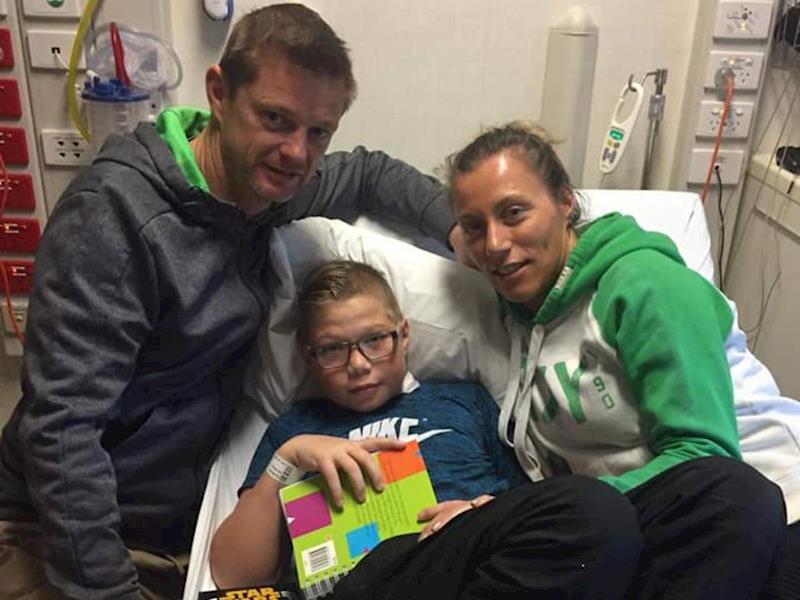 Help support Keil and his family with his Leukemia battle

Given by 110 generous donors in 4 weeks

Please help support Keil and his parents with the financial burden of not being able to work while Keil undergoes chemotherapy.

On August 1st this year my 10 year old nephew Keil, was diagnosed with T-cell acute lymphoblastic leukemia; a cancer of the blood and bone marrow. He will need three years of chemotherapy.

It all started when Keil thought that he had the flu. His glands on one side of his neck swelled up while he was away at his brother's rugby tournament. A few of the other kids had gotten a really bad flu so they assumed that's all it was. The family was staying in Nelson the next night as Keil's sister Keton had a gymnastics meeting. When they woke in the morning, Keil's glands had swollen up even more, and to top it off my brother's car had been broken in to with their back window completely smashed out and all their gear stolen. They eventually got home that night and took Keil to the doctor on the Sunday. After numerous visits to and from the doctor that week, lots of antibiotics, blood tests, a visit to A & E and more negative results, they still had no answer. Over the next weekend, Keil had swollen up even more but still played rugby union, rugby league and ran a mud run, ironically to raise funds for cancer. By now his glands had started to swell up on both sides.

Back to the doctor on Wednesday who sent him straight up to A&E, where he immediately saw the pediatrician. After more testing she heart brokenly told them it was almost definitely cancer.

Keil was immediately checked into Greymouth Hospital to monitor him before being taken over to Christchurch Hospital the next day where it was confirmed to be cancer. From here it was a whirlwind of action. Keil was poked, prodded, blood tested and prepped for surgery. By this stage on Friday morning, he was struggling to even breath. The whole time he didn't complain once.

Keil had a bone marrow aspirate, a lumbar puncture, chemotherapy injected into his spinal fluid and a port implanted in his chest. He had more needles poked in him and was starting to get really scared so the port was a godsend as most treatments and blood tests can now go through the port. On top of all of this, he has to take a lot of pills and tablets orally.

Keil is currently on his first 29 day chemotherapy course and seeming to be responding really well, but it's a 3 year road ahead of him which we will just have to take day by day. He is lying in bed today still happy and smiling while running his fingers through his hair and noticing it falling into his fingers. This is day 9 and this is the new normal for him.

Keil is the sweetest, kindest little boy and it's absolutely heartbreaking that this is happening to him. He has excelled at rugby union and rugby league and has a real passion for both sports. This will now have to go on hold for 3 years until he's fully recovered. My brother, Kriston, is off work for eight weeks, and my sister-in-law, Melia, will likely be off for even longer. For now, Kriston and Melia are staying at the Ronald McDonald House in Christchurch, while their two other beautiful little children are being taken care of by their amazing grandparents back in Greymouth.

Thank you so much for taking the time to read our story. Your support would mean the absolute world to Keil, Kriston and Melia, and our whole family. I know that they would be so beyond grateful to anyone who can help contribute to giving them one less thing to stress about at this difficult time.

Loss of income, travel costs to and from their home in Greymouth, supporting their other 2 children, and most importantly, one less stress to help make life as comfortable as possible for this family.

Paying to a verified bank account of Kriston Guthrie
Page Moderated The page has been checked by our team to make sure it complies with our terms and conditions.

Given by 110 generous donors in 4 weeks