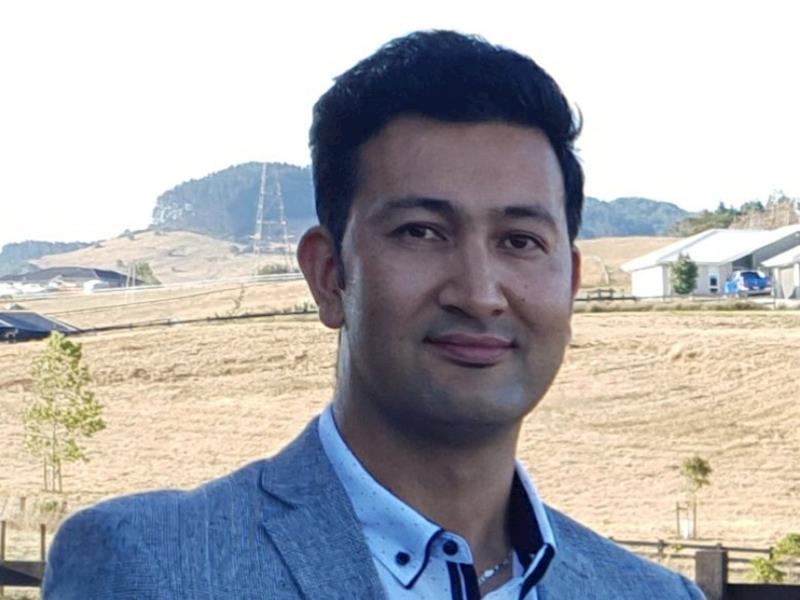 Closed Cause page created in the In Memoriam category by PodiatryNZ for "A PodiatryNZ member, Liya Janali, the widow of Khaliq"

Podiatrist Khaliq’s sudden death has devastated his pregnant wife. Let’s support this family through their grief.

On January 1st 2021, Auckland podiatrist Khaliq (Kal) Zullal lost an unexpected and sudden battle to cancer, a diagnosis he had only received four months prior. He has left behind his pregnant wife Liya, also a podiatrist, her two young children, and his parents that he was caring for.

PodiatryNZ members, Khaliq and Liya Janali (also known as Marshal) need our support. Let’s support this family. Khaliq strived so hard throughout his life. Here is an insight into his story.

Khaliq endured more than many ever knew or realised to build a life for his family.

Raised as an only child, Khaliq grew up in a small neighbourhood in Ghazni Afghanistan with his parents. His parents strived to give him the best childhood, helping him excel in his studies and sports. Life was treating them well until the circumstances worsened in his hometown and the Taliban took over Afghanistan.

At the age of 14, Khaliq and his parents made the very difficult and brave decision to choose his safety and send him overseas to seek a brighter future in a foreign country; seeking asylum in Australia. They acquired help to get him out of Afghanistan, travelling to Pakistan, then Indonesia, where he then risked his life to travel by boat to Australia.

After travelling for 3 days and two nights in a boat filled with 435 people, the boat broke down. Stuck in the middle of the Indian Ocean for days, Khaliq feared for his life as the boat was close to sinking, and so the chances of survival seemed to be getting dimmer.

On August 26 2001, Khaliq was one of the refugees that were rescued by the Tampa, a Norwegian cargo ship. This rescue made headlines after Australia refused to accept those on board as refugees. New Zealand welcomed them and gave them a home. From here, Khaliq spent a few years with 40 other boys from the Tampa under the care of Child Youth and Family.

After almost four years of living by alone with no family, Khaliq was finally reunited with his parents as they journeyed over to NZ. In the years following, Khaliq met and married his wife, Liya, completed secondary school, and attained two university degrees: a Bachelor of Health Science from Auckland University, and his Podiatry degree.

Khaliq encouraged Liya (known as Marshal to her fellow students) to study podiatry. On completion of her degree, and with a young child, Khaliq and Liya started their business, Mobile Feet Podiatry, which has three clinics across Auckland.

Outside of work, Khaliq was involved with Hazara Afghan Youth Association (HAYA). He was keen to participate in conversations around issues such as language and cultural differences, which are often faced by young people arriving in New Zealand. He would share his own experiences of how he overcame those barriers. His advice was always to take advantage of the opportunities provided in New Zealand and to fulfil your full potential.

Being fit and health, neither Khaliq nor anyone that knew him could have imagined that he would be diagnosed with an advanced stage of gastric cancer at only 34 years old. The news devastated his family - his parents, his wife who was 32 weeks pregnant, his daughter aged 11, and his son aged 4.

While Khaliq’s health declined after the diagnosis, he never gave up hope. He remained positive throughout the processes of chemotherapy, even while the doctors and specialists were giving little to no hope.

Khaliq passed away on the 1st of January 2021 at 11.20 pm. He is survived by his parents, his two children, Zenat and Ryan, and his pregnant wife. Khaliq’s death was a tragedy that continues to break many hearts.

Khaliq was a loving father, son, and husband. He was a kind, hardworking and resilient person. He was devoted to his family, his work, his profession and to his community. He had many dreams and hopes for his future like a most 34-year-olds would have, but time was not with him. He will be missed by everyone in the Afghan community, his family, friends and podiatry whanau.

Now, his family need your help. This is an incredibly tough time for Khaliq’s family. There are serious financial pressures on Liya to continue caring for the entire family, on a daily basis and preparing for a very different future than she and Khaliq had planned for.

PodiatryNZ have set up this Givealittle page on behalf of the podiatry profession to provide financial support to Liya and her family at this extremely hard time.

PodiatryNZ is the professional association for podiatrists. Both Liya and Khaliq (Kal) registered as podiatrists in New Zealand also being members of PodiatryNZ.

Donations would me immensely appreciated, will be deposited directly into Liya's bank account to be used at her discretion.

The need for help continues …

It is only a month since the passing of our dear colleague Khaliq (Kal).  Many people including friends, patients and colleagues have contributed much needed funds to support Liya (Marshal) and her family.  Liya feels incredibly blessed to have your support.  The kindness of so many will help her pursue Khaliq’s dream of building a new life in New Zealand.  You can check out Khaliq’s heartbreaking story on the Give A Little Page and perhaps share with others.  The Give A Little Page will conclude in February.

Vee on 17 Mar 2021
Khaliq and his wife were my classmates at the Horticulture class at Skills Update in Mangere. He came to my place with others and planted my delicious Luisa plum tree. The last time I saw him was when our class tidied up around his section. We did not know at the time how sick he was. It was devastating to hear the news he had passed away. Please pass on my deepest sympathy to his family
$50

Tamatha on 10 Mar 2021
I had the privilege of meeting Kal through his podiatry practice. He was very experienced and extremely professional. He was also very personable and shared his commitment and dedication to his Parents, Wife and Children. Sending Love and Blessings to his Family xo
$100

Paying to a verified bank account of Liya Janali on behalf of A PodiatryNZ member, Liya Janali, the widow of Khaliq
Page Moderated The page has been checked by our team to make sure it complies with our terms and conditions.

Want to get in touch with PodiatryNZ?