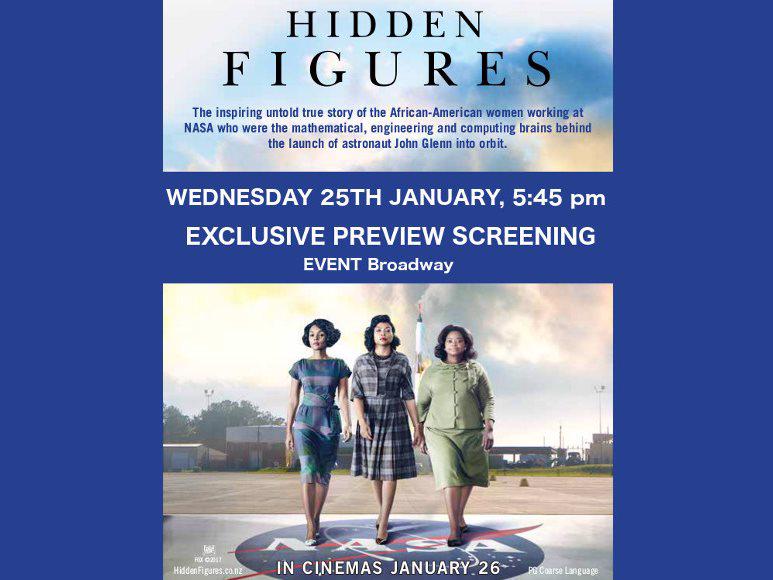 Hidden Figures: Help others reach for the stars

Love film? Love space? Love great stories about smart women getting stuff done? Support others to reach for the stars!

*UPDATE 20/1: All tickets now sold. You can still make a donation to support the scholarship, but no more seats are available for the film preview*

We've 180 tickets for an exclusive gala preview of Hidden Figures.

Donate $40 and you will get a ticket to see the film + a drink and a goodie bag, and know you’re supporting a good cause: contributing to a one-off undergraduate scholarship to cover the fees for a woman studying the physical or mathematical sciences or engineering in New Zealand.

Donations of multiples of $40 will be interpreted as numbers of tickets wanted. You can also donate more, should you choose! If you aren't based in Auckland, you can donate and we'll pass on your ticket to a student who is. Just leave us a note in the comments. You can of course donate less than $40 - while you won't receive a movie ticket and goodie bag, you will still be helping us reach our goal.

Hidden Figures is a celebration of the previously-little known contribution of African-American women to the success of the US space programme during the ‘Space Race’. It chronicles the lives of Katherine G. Johnson (Taraji P.Henson), Dorothy Vaughan (Octavia Spencer), and Mary Jackson (Janelle Monáe), who worked as mathematicians in the segregated West Area Computers division at Langley, and their critical contribution to the calculations that enabled John Glenn’s orbit of Earth in 1962.

The film foregrounds the importance of these women and their colleagues in US success in perhaps one of the more laudable scientific achievements of the 20th century, and in doing so, highlights the importance of diversity and inclusion in science – different backgrounds, life experiences, cultural understandings, personalities, and expectations improve the quality of the scientific or technological breakthroughs made.

60 years later, this lesson – that diversity and inclusion improves ideas, makes for better decisions, and is innately more just – is still being learnt. NASA announced only last week the appointment of Jeanette Epps to the crew of the International Space Station’s Expedition 56. Epps is the first African-American ISS crew member in history.

What you are supporting

Thinking globally and acting locally, this gala preview of Hidden Figures provides an opportunity for members of the science and technology community in New Zealand to respond to the issues raised by the film – the intersections of racism and sexism, and their ongoing impact on access to education and employment – by supporting the educational aspirations of people from communities currently underrepresented in science and technology.

We will use all funds raised to create a one-off undergraduate scholarship to cover the fees for a woman studying the physical or mathematical sciences or engineering at a New Zealand tertiary education institution of their choice, from 2018. Our initial commitment is to raising funds to cover the fees for first year study; our hope is to be able to cover the fees for three years of study. The criteria for the scholarship will be developed in consultation with representatives of groups that are underrepresented in science in New Zealand, including Māori, Pasifika, and the transgender communities. Please feel free to get in touch if this is something you are able to help with! The scholarship will be administered by the Association for Women in the Sciences (AWIS).

We’d like to thank 20th Century Fox NZ for making the film available, EVENT Cinemas for the venue, SOHO Wines for the wine, L’Oréal New Zealand for sponsored product, and AWIS for their support.

Volunteered to help out with group effort to support women in science in New Zealand.

We’d also like to thank four of the New Zealand Centres of Research Excellence – the Dodd Walls Centre, the MacDiarmid Institute, the Maurice Wilkins Centre and Te Pūnaha Matatini, as well as the Physics Department of the University of Auckland - for financial contributions that (more than) ensure that all further funds donated will go directly to the scholarship itself.

Created by, and paying to a verified bank account of, Siouxsie Wiles on behalf of Association for Women in the Sciences
Page Moderated
The page has been checked by our team to make sure it complies with our terms and conditions.

Want to get in touch with Siouxsie Wiles?