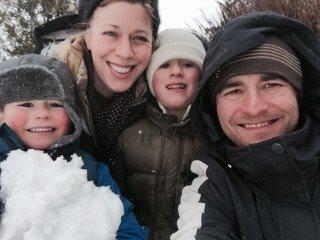 Fight to save Javier from Rare & Aggressive Metastatic Prostate Cancer

Given by 374 generous donors in around 3 months

Javier is facing the greatest fight of his life. Please join our Team and help us to afford to focus on Javier’s treatment!! Thank you <3

Please help us to save Javier’s life so he can continue to be a wonderful father to his two young sons Leo (6) and Alvaro (4) and husband to Fern and to live a full life with his family.

Javier Cabezas is a 37 year old Spanish Tennis Coach, popular and talented Head of Tennis at Remuera Rackets Club, who moved to New Zealand with his Kiwi wife to have and raise their family.

After growing up in his home island of Mallorca he began a new life in his second home, New Zealand, 8 years ago. He is a family person who has devoted his life to taking care of and providing for his young sons. Especially when his first son was born with kidney problems. He and his wife Fern decided that he would work and build a Tennis coaching business while Fern quit her job to be a stay at home mum, to commit to taking care of Leo full time, when he needed it most.

Javier is a positive, vibrant and kind person. He is well liked, intelligent and hard working. He has always been healthy, always eaten a balanced diet, doesn’t drink much, and leads a fit and active life.

Rarely will he be anywhere else but with his sons and wife, or on the tennis courts teaching young children through to talented young athletes and the retired community. He gets along with everyone from all walks of life. He genuinely cares about people and supports them in achieving their dreams.

But in May 2017 Javier noticed he had pain in his groin and worried he had a tennis injury. Then he noticed bleeding. They found a lump in his prostate but he was assured that his PSA markers were very low and his blood results showed a perfectly healthy young man. He was reassured that he was too young to get cancer. So he waited. But something didn’t feel right, so after much persisting he was put on a waiting list for an MRI scan, which wouldn’t happen till the end of this year. So the family paid to see a private Urologist.

An MRI in August confirmed the family’s worst fears. Admitted into hospital to undergo more scans, they discovered that Javier has Stage 4 advanced prostate cancer. It has metastasised. It started in his prostate, spread to his bladder, lungs, lymph nodes, hips and spine. It is rare, advanced and aggressive (10/10 Gleason level of aggression) It is incurable, inoperable and the doctors have told him that any treatment offered is palliative and not curative.

But Javier has other plans, he refuses to accept this prognosis and leave his two children without a father. He has started Hormone Treatment, is now undergoing Chemotherapy, which will be followed by Radiotherapy.

He believes he can be cancer free, through leaving no stone unturned. And he believes if he created the cancer he can eliminate it. He has altered his diet to a purely organic one and is following trusted alternative therapies to combat the cancer through nutrition to strengthen his immune system. But this all comes with a financial cost. While the family focus on saving his life they are relying on the kindness of friends to deliver organic food and to help with the children.

We also have hope in the new medical advances that are currently being made for cancer treatment, in the form of immunotherapy drugs. These drugs are still being clinically trialled and are given in the form of injections, which help detect and fight cancer using the body’s own immune system. Unfortunately these drugs only receive partial funding from the government and are extremely expensive, to the tune of many thousands of dollars. We are unable to explore this option of saving Javier’s life without financial help.

Javier is facing the greatest fight of his life. He has gathered his Team together. His Kiwi family, friends and colleagues and his Spanish family have flown in to support him. He relies on the combined knowledge of his oncologists, specialists, health practitioners, and many more to give him the best fighting chance.

In Javier’s own words…

“That’s what all the best tennis players do, they have their Team around them. You can’t do it alone. But at the end of the day you are the one out there on the court. It still comes down to you. I feel like I’m playing in the greatest tournament of my life. Despite the odds I will not give in because the difference between winning or losing, is life or death” We need Javier to win this. Please join our Team and help us to afford to focus on Javier’s treatment and enable him the best chance to live for Leo and for Alvaro.

We thank you so very much.

The Remuera Rackets Club is where Javier teaches Tennis and has been an integral part of our community for some time. We are rallying support for Javier and his family to get him the treatment he deserves, and help take care of his family.

Paying to a verified bank account of Fern Purdon and Javier Cabezas on behalf of Javier and the Cabezas Family
Page Moderated The page has been checked by our team to make sure it complies with our terms and conditions.

Given by 374 generous donors in around 3 months