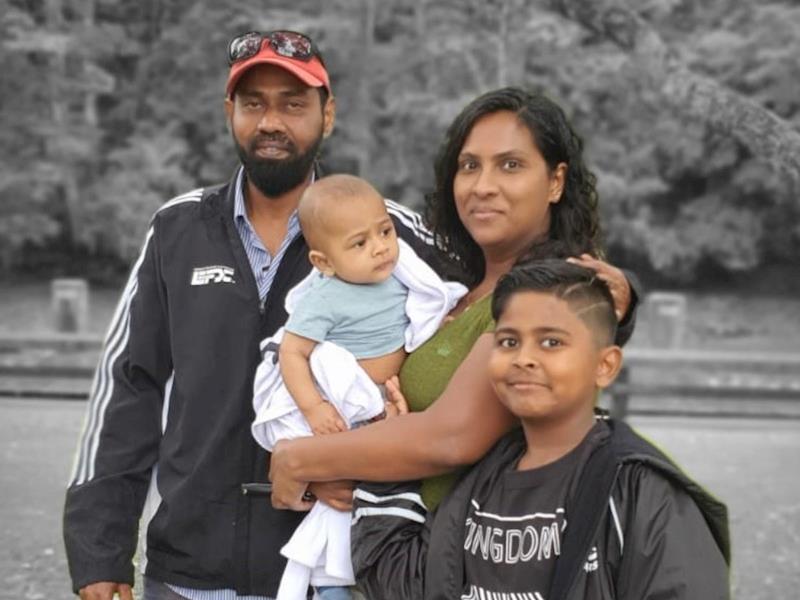 This is my friend Buddhini and her two young children’s story that desperately need your help.

After building a little stability, Jeevaka brought his wife Buddhini and their little son Vinuga to New Zealand in June 2017. Little Vinuga was four and a half years old when he arrived in the country. After three months, Buddhini started working at a restaurant to support her family.

Vinuga went to Newlyn Primary School when he was five years old and after two years he went to Kelston Primary School. Vinuga is very good in both studies and sports at school. He loves cricket and Karate. He plays cricket at school and at the Newlyn Suburb Cricket Club. He also has already won several medals in karate.

In August 2020, Buddhini left her job and gave birth to their second son, Vinuth.

Until February 2021 Jeevaka and Buddhini lived very happily with Vinuga and their new baby. However, their beautiful world collapsed on the 4th of February.

After having a good day at work, Jeevaka came home and went to bed. He did not wake up the morning after. He had sadly passed away due to a heart attack while he was sleeping.

Due to this Jeevaka’s sudden death, their world was turned upside down.

In addition to this, unfortunately, since Jeevaka was the sole income for the family, Buddhini cannot meet rent payments and is facing eviction.

I think within a year, all the issues this family currently faces can be resolved with your help. I would really appreciate any donations that could go towards the expenses of Buddhini and her sons’ visas as well as help with their accommodation.

Jeevaka and Buddhini are my friends and I know them since they arrived in New Zealand.

Thankyou all for your kind contribution  6 March 2021

I am proud of reaching half of our goal in as little as four days with your kind donations. I would like to thank all of you who came forward to make a donation, at their difficult time.

Guest Donor 3 days ago
May god give you peace
Private

Nishant on 08 Apr 2021
Wish the family all the very best.
Private

Paying to a verified bank account of Muthumudalige Buddhini Vinudya Sooriyaarachchi
Page Moderated The page has been checked by our team to make sure it complies with our terms and conditions.

Want to get in touch with Mahesh Hettiarachchi?