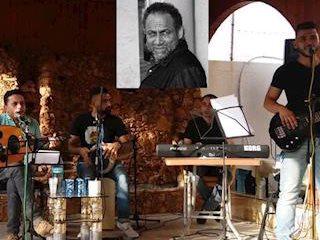 $1,194 donated
Given by 21 generous donors in around 4 months
Share Closed

This is a fundraiser for members of Palestinian band, Maimas, of Gaza, who sing songs of resistance and will soon record their first album.

This is an Australasian-based fundraising page for the Palestinian band, Maimas, which is based in Gaza. The band needs funds to record their first album in a recording studio in Gaza.

Haidar and the rest of the band members say art in Gaza is itself under a horrific, medieval siege, a siege that is the literal antithesis of freedom.

"By singing, getting our voices heard, we are, in fact, using music as a tool of resistance" says Haidar.

The band is working on more than one project. The first project is giving free concerts in various parts of the Gaza strip, focusing on marginalized areas that have been destroyed by Israeli bombings.

The second project is a joint musical collaboration with the South African band, The Mavrix, made up of Jeremy Karodia and Ayub Mayet called The New Black [https://www.youtube.com/watch?v=Y4rLfja8488]

The collaboration between Maimas in Gaza and The Mavrix in Johannesburg will culminate in the production of a video clip highlighting the similarities between the suffering of the two peoples.

The third project is the one that we are calling for your support to make happen. Maimas has already started collecting material for its potential album (depending on funding) that will consist of a revival of the songs of the first Intifada, and banned Palestinian songs of the 70’s and 80’s.

Whatever you can give will help this band a great deal! All funds raised will be sent directly to the band.

If you donate you will also receive the first song from the album emailed to you.

Thank you for your support of Palestinian art!

I'm involved because I've known one of the band members for nearly 20 years and would love to get people to support the band to make their first album.

Funds raised will be used to hire the recording studio in Khan Younis and transport members of the band to and from Gaza City and Khan Younis.

Maimas in concert in Gaza

Created by, and paying to a verified bank account of, Anna Majavu on behalf of The band Maimas in Gaza City, Occupied Palestine
Page Moderated
The page has been checked by our team to make sure it complies with our terms and conditions.

Want to get in touch with Anna Majavu?