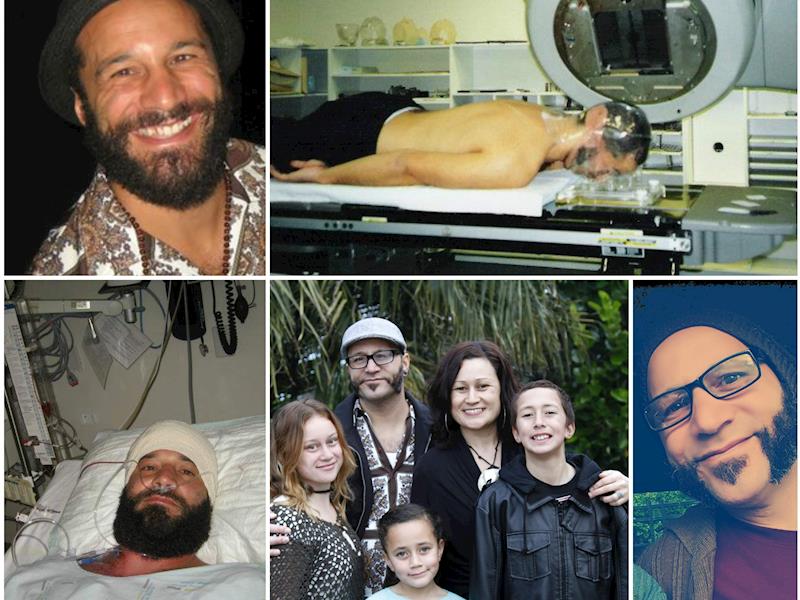 In 2003, Noah, a young fit Auckland postie was diagnosed with a brain tumour. Neurosurgery removed the tumour and he returned to work. After months of follow-up scans, the chances of another brain tumour were slim. Noah was 27 years old and father of one.

Two years later, Noah was diagnosed with a second brain tumour in the same place. A second surgery did not extract all the tumour, so a course of radiation therapy was given to that area. Alternative therapies were also used which slowed the tumour growth. The return of another tumour was unlikely. As a result of this surgery and radiation therapy, Noah has double vision and imbalance which he has lived with since this time. Noah was 29 years old and now a father of two. Noah never returned to the workforce but instead supported his family as stay at home parent.

Five years after the second tumour was removed, a third brain tumour grew in a different part of the brain. This was accompanied with the added complication of obstructing the fluid flow within the brain. Further surgery was undertaken and radiation therapy followed again. There were some tumour cells that were not removed but the fluid flow returned to normal. This course of radiation was given to his brain and spine with the intention of killing any cancer cells within the brain’s fluid system.

After this radiation therapy, Noah had received the maximum dose recommended for human tissue. Noah is unable to receive any more radiation therapy as it would kill his brain tissue and therefore is not an option in the future.

As a result of this course of treatment, Noah also developed hearing impairment as his ears were unable to be protected from the radiation exposure. He requires hearing aides in both ears. Noah was 35 and now father of three.

After many months, he finally seemed to be in remission once again. The chance of another brain tumour growing again was expected to be low. Noah also underwent eye surgery to correct the double vision which was a success.

In 2014, a fourth tumour was found in the middle of Noah’s brain above his brainstem. The site of this tumour also came with complexity of obstructing the fluid flow but also higher risks of life threatening and life changing effects. The rate of growth was slow and not causing any symptoms of fluid build-up in the brain.

In 2016, Noah did become symptomatic and just after his 40th birthday, Noah went into Auckland City Hospital for a removal of this fourth brain tumour. Due to complications after the tumour was removed, Noah required three shunts to re-route the brain fluid as his body now needs assistance to balance the fluid level. He received a total of 7 surgeries to his brain, spending 3 months in the Auckland City Hospital neurosurgical ward and 1 month in Middlemore’s Rehab ward. Double vision has now returned, coupled with hearing impairment and imbalance.

Today, Noah is on the long road to recovery and working hard everyday in his rehabilitation programme. He enjoys every moment he spends with his family and friends to get back into living life.

The surgical team were unable to remove all of the last tumour due to the high risk of death. Noah has received the lifetime limit of radiation therapy and chemotherapy will not work on this type of tumour as it does not cross the blood brain barrier.

IV Vitamin C treatment has been found to reduce the size of tumours and prevent tumour growth.

There has been particular success with brain tumours as it crosses the blood brain barrier – something that chemotherapy is unable to do. Therefore, IV Vitamin C treatment is a valid option for Noah to try.

While the evidence continues to grow in this field, there is no funding available from the government in NZ at this time.

This regime will reduce to weekly then fortnightly doses as a maintenance regime for the remainder of the year and beyond.

We would like to express our deep gratitude to all of the surgeons, Medical, nursing and Allied Health staff and support staff at Auckland City and Middlemore Hospitals. You are amazing and Noah would not be with us today without your expertise and compassion.

And of course our amazing family and friends… we could not have made it through this challenging time without your unconditional love and support.

If you would like to support Noah and donate to his treatment, please see the details below and remember to add your name so we know who Noah’s angels are:

Your help is much appreciated!

I am Noah's wife's sister. He is like a brother to me and the cancer, the surgeries and the treatments have taken an incredible toll on Noah, his wife, his children and quality of life. Noah is one of the strongest people to continue his daily struggle with a light mind and smile on his face. His wife works tirelessly as sole income earner, caregiver, parent and student. His children have faced challenges many of us only read about.

The funds will be used directly for Noah's Vitamin C treatment, the goal amount is the calculated cost for the treatment for 2017.

Overwhelmed by the phenomenal response, Noah and Pauline give their thanks in a video.

Katherine on 09 Jul 2017
May many blessings of good health in your time of need be yours, Noah. Aroha and light to you, Pauline and your beautiful family. Kia kaha.
$100

Paying to a verified bank account of Noah Telfer
Page Moderated The page has been checked by our team to make sure it complies with our terms and conditions.