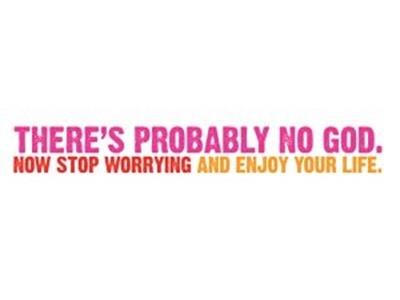 All donations will be put towards bus advertising using the slogan in the image. Buses in Auckland, Wellington and Christchurch will initially be used, with plans for other cities later.

A wide variety of campaigns are used to promote humanism.

Damian Adamski on 23 Sep 2010
My vote is for Hamilton -- Temple view. The road that leads out to the Temple. Keep up the great work
$20

Warren Chinn on 29 Apr 2010
What a beautiful message: Believing there is no god gives me more room for belief in family, people, love, truth, beauty, sex and all the other things I can prove that make this life the best life I will ever have. Appealing to god rather than those affected by one’s actions amounts to an attempt to escape accountability to one’s fellow human beings.
$20

Created by, and paying to a verified bank account of, Humanist Society of New Zealand (Charity)
Tax credit Donations of over $5 are eligible for a New Zealand charitable giving tax credit.
Page Moderated The page has been checked by our team to make sure it complies with our terms and conditions.

Want to get in touch with Humanist Society of New Zealand?