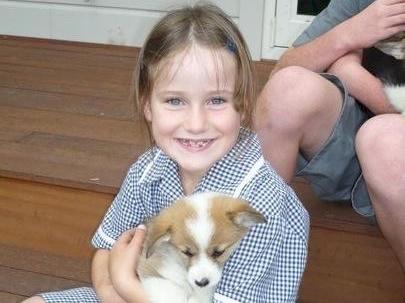 One Dollar Warriors - Fight for Grace

Two months after Grace Yeat's 10th birthday, a virus 'attacked' her brain. She is now completely dependant on 24 hour care.

Grace Yeats is the gorgeous daughter of a lovely friend of ours, Tracy Yeats. Tracy started Bellyful Carterton, back in 2010, and had her hands full with that, as well as her work as a Plunket nurse and her three kids.

Then came a life changing event, as told below by Tracy.

Two months after Grace’s 10th birthday, she had a mild virus; sore throat, runny nose, headache, cough. But the GP didn’t seem concerned, so no treatment was given - it was labelled simply a ‘virus’.

However, on that awful day, Grace woke in a wet bed, vomited in the shower and I found her sitting on her bed crying because her legs hurt and she couldn't get dressed!

We went back to the medical centre immediately and by then she was sitting hunched and dribbling but could still walk and answer questions.

We drove her to the emergency department at Wairarapa hospital by 10am where we were given a cubicle, Grace was still answering questions but was very flushed and slept most of the time.

We waited until mid-afternoon to be seen by a Paediatrician and from there she deteriorated quickly, prompting them to do a lumbar puncture (a large needle which takes spinal fluid - extremely painful, but Grace didn't flinch) and later a CT scan where finally they could see that her a vital part of her brain (the Basal Ganglia) was under attack.

By then Grace was barely rousable and as late evening approached we were informed that we were to be helicoptered to Starship as our daughter was gravely ill.

I held her hand for the whole two hours of the flight and she would occasionally lift her head and look at me. I couldn't talk to her over the noise of the engine so I would squeeze her hand. I didn't know what to think or what was happening. I could not believe we were in a Life-flight helicopter headed for specialist help. We arrived in Auckland at 3 am.

After a few days and many IV's, scans, medications and tests, Grace seemed to improve slightly.

That was until the spasms (dystonia) started - cramping pains in her legs that began creeping up her entire body, robbing her of movement and causing indescribable pain.

It was terrifying for her - and also for us. As a nurse, I had never seen anything like it. It was as if an evil puppeteer was in control of her body, twisting and contorting her. Legs, arms, torso, neck, jaw, face and even her eyelids were involved.

Her pain was extreme and we had no answers, the medics were unsure of what to do with her and could not offer a diagnosis or prognosis.

They stated they had never before dealt with a child whose pain they could not control. Graces body would only stop spasming if she was loaded with sedating medications to the point of unconsciousness.

After three weeks of this, Grace’s legs were stiff and locked with contractures at the ankle and knee, such was the force of the spasms in her body. After six weeks of unending torture, her level of drug induced sedation had to be increased so much that eventually she was on the verge of respiratory arrest and was rushed back to ICU and put on life support.

After 9 months in Starship Hospital, Grace was moved to Masterton hospital, where she spent another 8 months before being able to come home. She now needs 24 hour care and supervision, including someone awake with her all during the night. Grace is fed through a tube in her stomach and is completely dependant for all physical care. She is unable to talk, walk, or even sit, and has very mininal purposeful movement. Trying to move causes her to spasm and lock up completely. However, cognitively Grace is completely fine. She understands everything that is going on around her - just as you and I would - however, she is unable to talk.

Last year Grace began using an iPad with a talking App. We were so excited that finally we could get a simple 'yes' and 'no' from her after months of nothing.

Her vocabulary on the App has expanded since then but her arms and hands are always at the mercy of the dystonia so often she finds it impossible to interact.

I started hearing about the use of medicinal cannabis, about 18 months ago, after researching other treatment options for Grace, because we have exhausted the possible medications currently available.

I contacted other people who were using this as a treatment for dystonia (in the form of CBD oil which contains none of the THC in cannabis that would induce a ‘high’) and they were able to tell me what a fantastic response they had and how much it helped them calm spasms and relieve their pain. It was something I knew we needed to try to achieve better quality of life for Grace.

In full agreement with our specialists an application for Sativex was made to the Minister of Health and was approved. This is the only legal form of medical cannabis available to anyone in New Zealand and does contain both CBD and THC.

We started on the 3rd of November and after the first spray Grace could feel the relaxing effect. The difference in her spasms has been remarkable but also it has given her an increased alertness and focus. She finds her iPad easier to negotiate and is doing so much better coping with the school environment.

Her teachers, support workers and psychologist have all been amazed at the change in her since the introduction of Sativex.

Over time, as Grace continues to use Sativex, she is likely to have continued decreased spasms, which means a decrease in her pain, but also an increase in her motor skills and ability to communicate.

The cost of Sativex is $1100.00 per month and we have been told that it’s not likely to be funded in the near future.

Grace is now 13 years old, and all we want for her is the best quality of life that she can realistically have - free of agonising spasms, with some ability to communicate, and able to participate in life as much as she is able - that’s what Sativex can give her.

I have had to stop work to become Grace’s permanent carer, so I simply don’t have the ability to fund the Sativex. When Jacqui mentioned that this was something One Dollar Warriors could help with, I couldn’t believe it. I am absolutely beyond grateful that the amazing One Dollar Warriors (which I’ve been one of from the start!) would help our little girl. Thank you so much."

So come on Warriors, let's pay for 12 months worth of Sativex for Grace, so that she can continue to have decreased spasms and pain, and to gain some quality of life.

We are One Dollar Warriors - helping Kiwi's to raise funds to fight life threatening illnesses.

Chrissy Shaw on 22 Feb 2018
So pleased you've found something to improve Graces life a little.
Private

Chrissy Shaw on 15 Feb 2018
So pleased you've found something to improve Graces life a little.
Private

Created by One Dollar Warriors (Group)

Paying to a verified bank account of Tracy Yeats on behalf of Grace Yeats
Page Moderated
The page has been checked by our team to make sure it complies with our terms and conditions.

Want to get in touch with One Dollar Warriors?