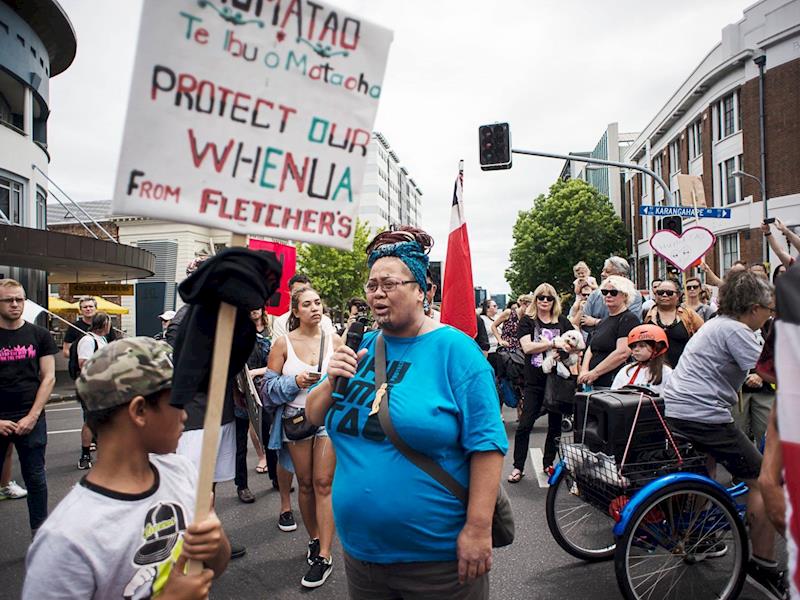 Given by 95 generous donors in around 12 months

In 2014 Auckland City, using the Special Housing Areas Act, designated 32 hectares adjacent to the Otuataua Stonefields Historic Reserve as a special housing area. This land, known as Puketāpapa, was confiscated ‘by proclamation’ under the New Zealand Settlements Act in 1863 as part of the colonial invasion of the Waikato that drove mana whenua of South Auckland from their lands ahead of the settler armies. These Crown actions breached the partnership agreement forged in the 1840 Treaty of Waitangi. The former Manukau City Council sought to ensure that it would become part of OSHR but its strenuous efforts to purchase Puketāpapa were thwarted by the landowner whose antecedents had obtained it by Crown grant in 1867. The boundary lines between the OSHR and SHA62 are simply the 1866 surveyor’s carve-up of the confiscation that dissects a rich, storied, and culturally and heritage-wise continuous landscape. The land is now owned by Fletcher Residential Limited, which intends to build a low-density subdivision with 480 high-price dwellings on this heritage landscape.

It is important to understand that this land is a crucial part of one of the last remnants of the archaeologically rich stonefields landscape across Auckland and, as a natural component of the adjacent but legally separate OSHR, it holds the stories of the earliest inhabitants of our country. The OSHR protects the places where the first Māori gardeners lived and worked using the stones and the microclimates they created to grow their Pacific Crops. SHA62 similarly is one of the last surviving places where the land and stone walls used by Māori for growing new crops such as wheat and European vegetables for the Auckland markets prior to 1863, still exists. It is of special significance in that here the ancient and more recent gardens stand next to each other. These places are even rarer than the stonefields were at the time of the creation of the Ōtuataua Stonefields Historic Reserve. Unlike the OSHR this land has been allowed to be scheduled for destruction without proper consultation with mana whenua and affected Māori. This land is strategically located only a few miles from Auckland International Airport and should be considered as a very promising location for a world class visitor, research, education centre, working farm and open green space.

The creation of and now protracted controversy over SHA 62 enacts yet another layer of injustice, in what was already a fraught history of Crown-Māori relations in this place. Fletcher, a majority foreign-owned corporation, was able to use the provisions of the pro-development, anti-democratic, SHA Act 2013 to shut out and silence mana whenua grievances and community concerns over the proposed development. The proposed development coupled with the Act’s consultation restrictions led to tensions at a local level among mana whenua. With a sense of inevitably, some sought to mitigate the anticipated serious and wide-ranging impacts of the SHA development while others (including the rangatahi who co-founded SOUL) mobilised supporters into action, to continue to use any and all legal and political means to stop the SHA62 development. Again, a Pākehā law and Pākehā processes have driven a wedge between affected Māori, creating a divided house. The Government must intervene and create an opportunity for meaningful engagement so that all affected Māori can express their concerns and interests.

Created by, and paying to a verified bank account of, SAVE OUR UNIQUE LANDSCAPE (Group)
Page Moderated The page has been checked by our team to make sure it complies with our terms and conditions.

Given by 95 generous donors in around 12 months