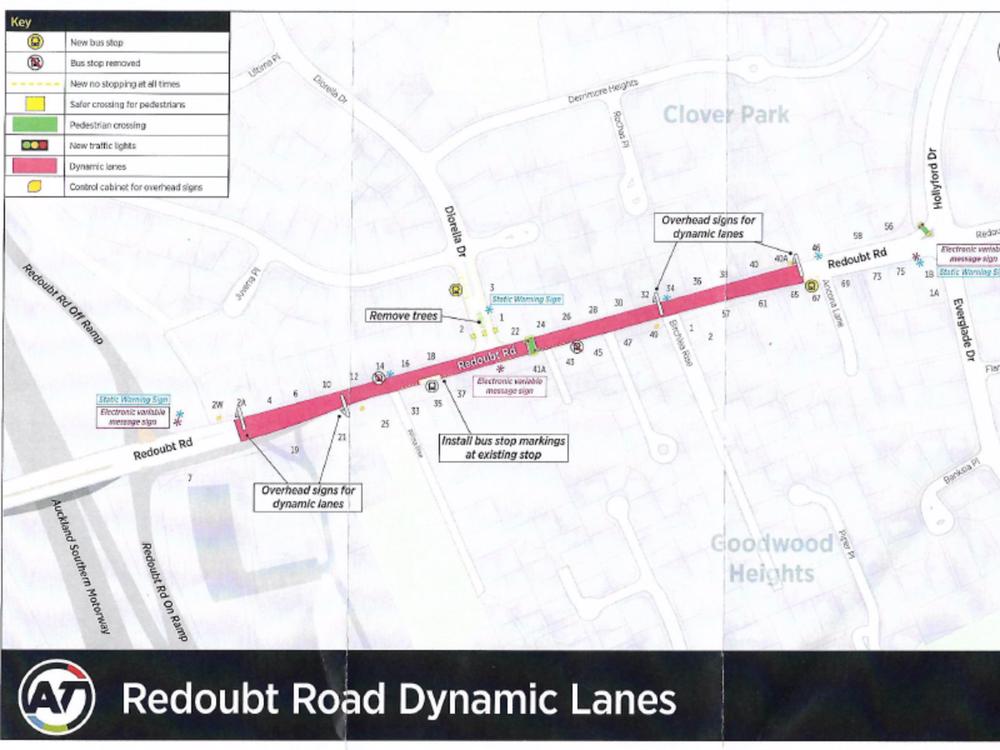 Redoubt Road is unsafe for pedestrians using the 2 major bus stops. AT needs to get involved to provide a safe place for children to cross.

Auckland Transport have decided to go ahead with the Dynamic Lanes project, which will make Redoubt Road more dangerous for pedestrians and motorists alike.

What this will mean for motorists is that the direction of traffic will change between the morning and afternoon traffic peaks. This is similar to what happens on the Auckland Harbour Bridge or Pakuranga Road Bridge. What this means for pedestrians is that there will be no pedestrian refuge in the middle of the road, and the direction of traffic will change from morning to night. The chance of a fatal incident has just been increased.

Fortunately, AT have agreed to install a pedestrian crossing with signals after pressure from our volunteers and supporters. Unfortunately, its location is not the best which may mean pedestrians avoiding it. They also intend to add extra bus stops around the crossing, so stationary buses will block traffic when traffic flow is down to a single lane.

We remain committed to the final outcome, which is a proper four-lane road with public transport solutions and enough room to walk and cross safely. This project may be approved after the election, so spending ratepayers' money on an unnecessary stop-gap measure is a waste of time and money.

Please keep your donations coming. The more we get, the more we can pressure Auckland Transport to listen to the needs of the community and those passing through on a daily basis.

Redoubt Road was once a semi-rural road where people happily rode horses and it was safe for children to cross. Today Redoubt Road is a congested corridor to someplace else. The road has barely changed while the surrounding suburbs have sprawled around the historic redoubt. NZTA have improved connections to the motorway, but Auckland Transport has barely been involved.

AT sorely needs to get involved to provide a safe place for children to cross. Redoubt Road is home to many families with children and the two major bus stops service a school bus route and 3 public bus routes. Everyday I see children running across 4 lanes of traffic to get from one side to the other. The only safe place to cross is 350 metres down the road, and many children take the risk to get home earlier.

I would often wait at the bus stop to pick up my son so he wouldn't need to take the risk. Each day I waited, I saw too many near misses as impatient drivers also tried to get home faster. I wrote to Auckland Transport and begged them to install traffic signals or a pedestrian crossing. They recognised that there was a need, but refused to allocate funding. It is a disgrace that Redoubt Road has been left for 20 years while this problem keeps growing.

AT propose to add a new signalised pedestrian crossing NEAR to Diorella Drive. The crossing should be on the intersection of Diorella Drive with Redoubt Road rather than to the side.

I offer the following reasons:

1) This is a busy intersection with a high volume of traffic.

In fact, it has the same volume of traffic as the intersection of Diorella Drive with Te Irirangi Drive. That is because motorists use Diorella Drive as a rat-road to access the motorways and Redoubt North is the location of a large primary school. I have previously written to AT about the traffic problems with that intersection on Te Irirangi Drive, and they have mostly solved that by installing smart traffic lights with variable signals.

Obviously, you can't have variable signals on Redoubt Road unless you first install a full set of traffic lights on this intersection. If AT avoids this problem now, it will cost more to solve in the future.

2) Pedestrians don't just cross Redoubt Road, but Diorella Drive as well. AT proposes to remove trees on Diorella Drive to improve visibility for J-walking pedestrians. This problem can be avoided with a 4-way crossing at this intersection. Those trees have been there for over 40 years and have never hurt anyone. Destroying these trees will ruin the green and aesthetic environment for no real gain.

3) Currently, traffic turning right from Diorella Drive into westbound lanes on Redoubt Road only need to cross one lane of traffic. Even then, this relies on caring motorists to leave a gap when they are under no obligation to give way. Now, with the addition of dynamic lanes, right turning traffic will now have to cross two east bound lanes during peak times to access a sole westbound lane. This will drastically cut down the chances of motorists letting traffic in and make it more dangerous to turn. What's more, traffic turning right from Redoubt Road into Diorella Drive will likewise have to cross two lanes of peak traffic while holding up all the traffic behind them as they wait for a gap.

4) This intersection is already dangerous. There have been 3 serious crashes in this area in the last two years that have made newspaper headlines. Now, the proposed changes only increase the danger posed to pedestrians and right turning traffic.

Accordingly, I submit that there needs to be a full set of traffic signals at the intersection of Diorella Drive and Redoubt Road to protect pedestrians and right turning traffic. Yellow no-stopping lines would be beneficial on Diorella Drive at all times, so I support this improvement.

Note: There is no need for signalised pedestrian crossings on the slip lane going from Redoubt Road to Hollyford Drive. Hollyford Drive is due to be widened as well, so these signals will need to be ripped out and replaced soon after installing them. Foot traffic is almost non-existent outside of bus service times, and the distance is not far to cross. A painted pedestrian crossing will be sufficient. There is also no need to replace the free turn as there are no recorded traffic problems with this slip lane.

AT propose to change the location of 2 bus stops on Redoubt Road and install two new ones. There is also a third bus stop that hasn't been mentioned, which I hope is not moving.

1) The bus stop located near to lot 26 on Redoubt Road should stay where it is. This is used by the 35 Route to Botany Town Centre and several school buses. It has also been suggested that a future bus route from Manukau to Papakura via Mill Road will use this stop. This hasn't been mentioned in the plan, but I want to ensure that this bus stop stays where it is.

2) The bus stop located near to lot 43 on Redoubt Road should be re-located to lot 25 (not 35 as indicated). The reason for this is that lot 25 on Redoubt Road is council owned land for the St John's Redoubt. This means that land can be requisitioned to create a recessed bus stop out of the flow of traffic.

When Redoubt Road is reduced to one westbound lane, all traffic will be blocked by the bus when it stops to pick up passengers. The addition of dynamic lanes will change the dynamic of the traffic and create a bottleneck when buses use this route. Therefore, a recessed bus bay and bus shelter should be installed at the St John's Redoubt on the south side of the footpath.

3) Similarly, the new bus stop at lot 67 on Redoubt Road should be cancelled. There are two lanes of traffic turning right from Hollyford Drive into Redoubt Road. When a bus stops here, the traffic will back up over the intersection. This will be even worse during times when Redoubt Road is reduced to only one westbound lane as two lanes will need to merge into one lane that is blocked by a bus picking up passengers.

Your donations will go towards a direct marketing campaign to Auckland Council and Transport officials to build safety improvements for pedestrians. Every dollar you donate will be another letter sent.

Created by, and paying to a verified bank account of, Glen Snelgar
Page Moderated
The page has been checked by our team to make sure it complies with our terms and conditions.

Want to get in touch with Glen Snelgar?