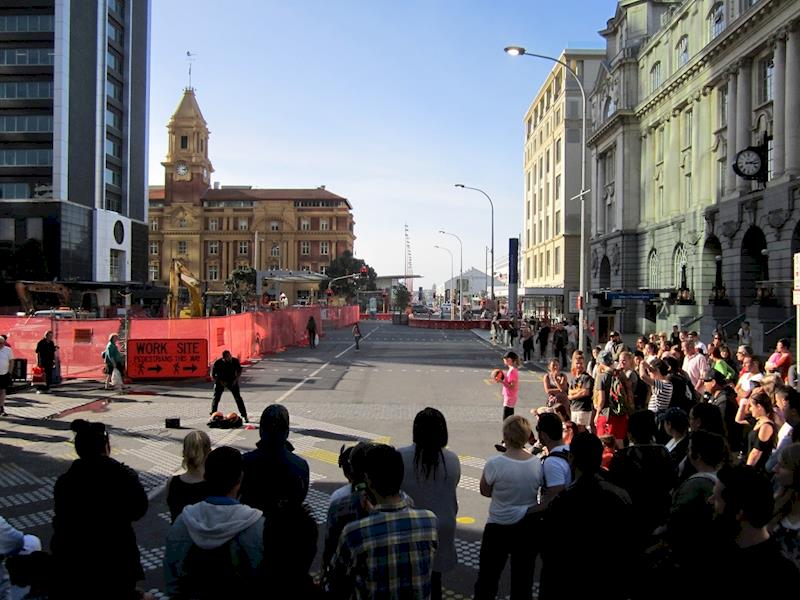 Stop the sale of Queen Elizabeth Square in downtown Auckland

Architects, urban designers and planners take Council to court to stop the sale of Auckland's downtown civic square. We await the decision.

We need your support to cover some of the costs of our experts who lent their time, knowledge and reputations to this campaign.

Despite this Auckland Council voted to sell Queen Elizabeth Square for $27 million to property developer Precinct Properties. We agree with Council that the square has not been successful - because the 1970's downtown shops don't open onto the Square, and because the bus shelter divided the space.

But that's all changed. The buses have moved to Lower Albert Street. And Precinct already has consent (June 2015) to redevelop downtown with laneways and shops open to the square - all without taking the Square.

Queen Elizabeth Square, combined with Lower Queen Street will make a great downtown square. Like the picture postcard image of the 1990's, and consistent with Council's City Centre Masterplan.

Council says it will invest the $27 million from selling QE Square on other spaces such as the breastworks of Queens Wharf and the north side of Quay Street opposite the PWC building. We say those areas are already in public ownership. We also consider they are very different public spaces than the recessed, sheltered, safe and activated Queen Elizabeth Square. It's not a like for like swap.

We support the CRL tunnel. We support Precinct's existing proposals to redevelop downtown Auckland. But there's no need to sell Queen Elizabeth Square and increase the size of the shopping centre.

We believe this is an unjustified loss of public open space that is protected by the District Plan, is ready for improvement, and will be needed more and more in future. The additional retail buildings proposed if QE Square is sold would affect views of the heritage Ferry Building and Central Post Office Building, cause further shading, and diminish the size and scale of Auckland's premier civic space. (See the bulk and location effects in our Give-A-Little Updates).

Two statutory steps stands in the way of the sale. Plan Change 79 and a Road Stop proposal. Both have been appealed to the Environment Court by Auckland Architectural Association Inc.

Expert evidence has been exchanged. A five day environment court hearing started on Monday 18th July, and was largely complete by Friday 22nd July. We have raised funds and obtained the services of experts and lawyers at heavily discounted rates. Our experts include:

Please support this public interest cause.

The Environment Court has upheld the QE Square Road Stop, and declined the objections of Auckland Architectural Association. Parties are now finalising the conditions for Plan Modification 79. This means the way is now clear for Auckland Council to sell all of QE Square to Precinct Properties. Which is sad for Auckland. With the clarity of hindsight there was a strong case to argue for retention of the sunny side of QE Square, and the sale of just the dark side. However it was a difficult David and Goliath contest. Among the hard won gains for Auckland:

* Auckland Council will consider the needs of CBD and passenger transport pedestrians differently and more thoroughly after this battle.

Jonathan Cutler on 11 Aug 2016
Well done Joel and team for putting up the fight. As a planner in Auckland in saddens me that the likes of the groups such as AIA need to challenge poor politically driven decision making like this. I have lost count of the number of times in the last 20 years we seen government agencies at all levels make such short sighted decisions for Auckland's long term future. Same old same old it seems ...
$30

Created by, and paying to a verified bank account of, Auckland Architectural Association (Group) on behalf of expert witnesses and legal counsel retained for environment court hearing
Page Moderated The page has been checked by our team to make sure it complies with our terms and conditions.

Want to get in touch with Auckland Architectural Association?