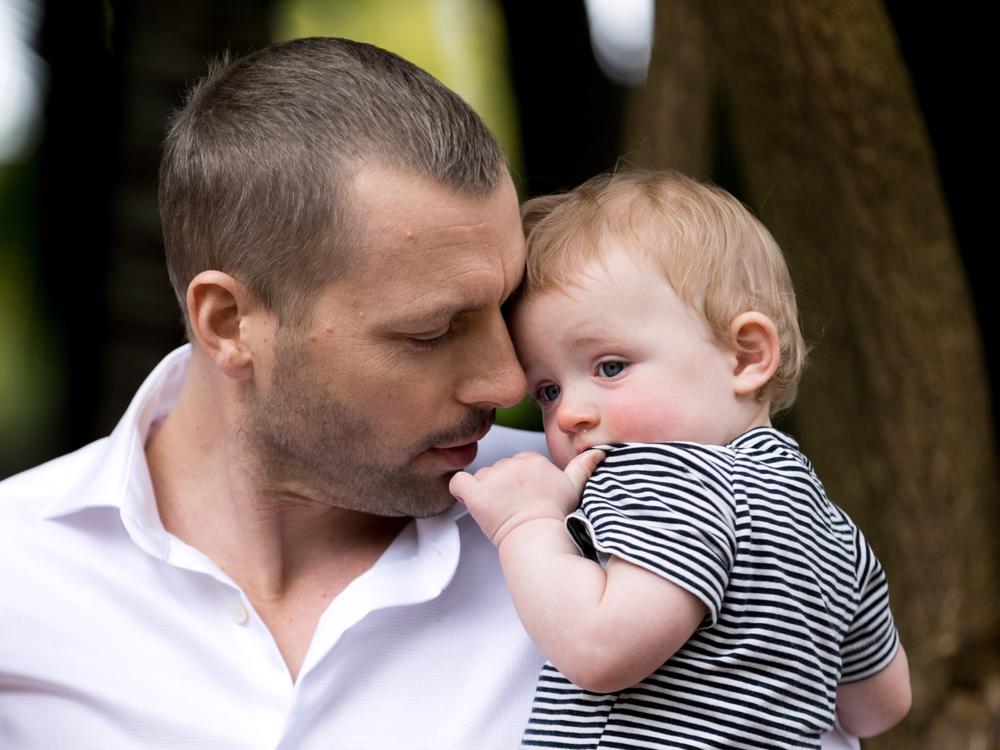 Kurt has one last treatment option. Set to be the race to save his life...

WE NEED YOUR HELP IN THE RUSH TO SAVE KURTS LIFE!

Kurt is a 41 year old husband and father to baby Sage who is now almost 1 year old. When Sage was just 4 months old Kurt was diagnosed with aggressive Stage 4 Diffuse Large B-Cell Non-Hodgkin Lymphoma, a type of blood cancer and initially his prognosis was good. Specialists gave him a 90% chance of beating the disease, and up until 6 weeks ago, after months of treatment it looked like he had. Then a check up scan revealed that Kurt’s cancer was back, and since then further rounds of salvage chemotherapy have failed to get the all-important result that Kurt and his little family so desperately need. This fundraising page is about Kurts last chance at survival, and why we have had to put a call out for support.

Now Kurt and his family have been told that he has had no response to the final salvage chemo regime, which means that a potentially life saving stem cell transplant is no longer an option, and that he has no further treatment options available to him in New Zealand. We are now in a race against time to get Kurt to the USA, for a treatment that might just be the answer to keep Kurt with us...

If you don't know Kurt, here is what you need to know...

- He has a smile that lights up a room.

- He’s one of the nicest guys you’ll ever meet.

- His young family and wife Janelle have a huge heart.

- Sage is a daddy's girl, and deserves to grow up with her Dad.

- Kurt was fit, strong, healthy, and took great care of himself.

- Kurt is a fighter and refuses to give up.

- Kurt has got a whole lot more living to do and is looking forward to many more Fathers Day’s to come.

Kurt has one last treatment option.

Set to be the race to save his life...

He needs to make it to the USA for a ground-breaking CAR-T (immuno) therapy trial. In cases like Kurt’s, CAR-T is achieving remission in around 40 – 60% of treatment participants. The issue with cancer is that the body's normal defences (the T cells and B cells) don't notice the cancer cells, so they are free to multiply at will. Diffuse Large B-Cell Lymphoma occurs when our bodies B-Cells become abnormal and larger than normal, and they destroy the structure of the lymph nodes. CAR-T therapy is where the CAR bit stands for 'Chimeric Antigen Receptors', and the T bit refers to the T-cells in the blood, the so called 'killer cells'. The treatment involves harvesting Kurt’s own T-Cells, genetically engineering them into killer cells and then reinjecting them back into Kurt to fight the cancer. These new CAR-T cells are basically genetically modified killer cells. Immunotherapy is the future of cancer treatment, and is not yet available in New Zealand for Kurt’s disease.

CAR-T Therapy for international patients will cost up to US$800,000, and Janelle and Kurt are willing to sell their home, cars and everything they own if they have to, so they can get Kurt the treatment he needs to beat this thing once and for all.

If you’re in a position to help Kurt receive the potentially life-saving CAR-T Therapy that he so desperately needs, then he and his little family would be forever grateful.

Thank you to everyone showing up to help in this Kurt's hour of need.

Every donation, message of support, positive thought, and prayer is appreciated. Thank you for contributing to #SavingKurt

Funds will be used for CAR-T Therapy for international patients will cost up to US$800,000. If for any reason Kurt is not eligible for treatment all funds raised will contribute towards alternate treatment and to support his family during this time. 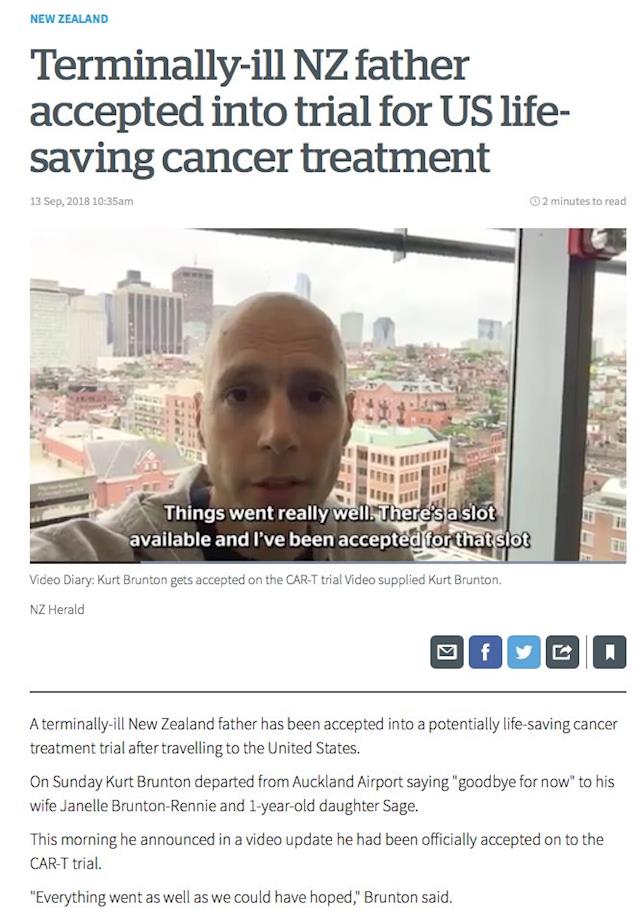 Kurt accepted into a potentially life-saving cancer treatment trial after travelling to the United States.  17 September 2018

A few days later he announced in a video update he had been officially accepted on to the CAR-T trial.

Read more about his journey and updates here:

Bronwyn on 30 Sep 2018
Good luck with treatment, my thoughts are with Kurt and his family and friends xx
$40

Monique Wintle on 28 Sep 2018
Prayers and thoughts are with you guys!
Private

Paying to a verified bank account of Kurt Brunton
Page Moderated
The page has been checked by our team to make sure it complies with our terms and conditions.

Want to get in touch with Emma Mildon?