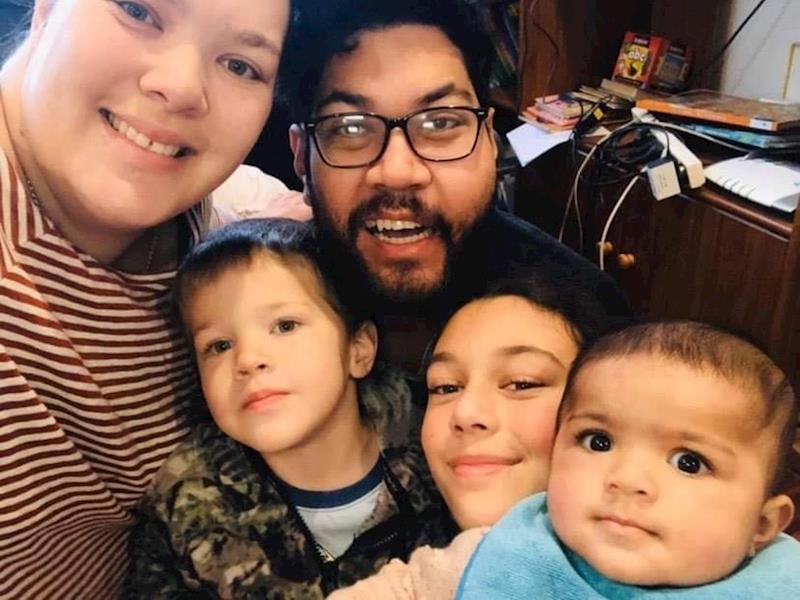 George has recently been diagnosed with terminal brain cancer. Help provide practical support to his wife Nicole and their 3 children.

George is 33 years old and has been married to Nicole for almost 7 years. He is the father of 3 amazing children; Jade (11 years), Ezekiel (4 years) and Willow (1 year). Earlier this year, right before lockdown, George discovered a lump on his cheek and was experiencing a lot of pain. After several weeks of enduring this, Nicole made George go to the local after-hours medical centre for assessment. Due to the lockdown restrictions, George was unfortunately misdiagnosed with a tooth abscess and sent home with antibiotics. After this course of antibiotics, he was prescribed several more different types of antibiotics; all the while the tumour was growing rapidly behind his left eye and dangerously close to his brain. Eventually, a CT scan of the growth showed it was abnormal, and subsequently George was diagnosed with cancer.

At the end of May, George underwent surgery where the growth, his left eye, much of his upper jaw and most of his teeth on his left side were removed. George then travelled a daily 2 hour return trip for 6 weeks of chemotherapy and radiation treatment. The Doctor's hope for George was that after all of this, he would be cancer-free.

Three months later, George had follow-up scans to see if treatment had been effective. George had a CT scan which the Doctors said looked very good and from what they could tell, the images showed no cancer. An MRI came next, just to be 100% sure he was in the clear.

Last week George and Nicole met with his Doctor and he gave them the devastating news that the cancer has spread to his brain, into his nerves, and is tracking towards his brain stem. When cancer reaches the nerves, it is not curable. George has been given a terminal diagnosis.

This is where your help would be most valuable; due to George's life insurance policy having minimal cover, they are now facing the stress of paying for a funeral, mortgage, and other ongoing living costs. The financial support from funds raised will mean that George has the peace of mind that his wife and children will be looked after. It also means George and Nicole will be able to focus their remaining time together making memories as a family.

I am a friend of George and Nicole's, and want to make sure their family is looked after during this time.

Funds received will go towards funeral costs and help to support Nicole and the kids when George is gone. With less worry about these things, the Moana family can focus their attention on making memories and planning a final trip together.

We, the Moana family, would like to send out to each and every one of you our most sincere gratitude. Words can’t express how grateful we are, and how blown away, humbled, and down right speechless we are for each and every one of your donations. Whether big or small, your donations and support have truly made a difference for our little family. Seeing our givealittle page funds grow, we have been brought to tears with gratitude and the fact that even strangers are giving their hard earned money to us.

Because of you, we are financially able to take the kids on a trip to Wellington and do a few fun activities with them: Weta Workshop, the Zoo, Croc Bikes, the cable cars, and lunch and dinner out somewhere special. George is able to go sky diving in Taupo, and together we will go glamping for 3 blissful nights in Martinborough- just the two of us! The funds you have all contributed to raising will also be going towards a very special funeral for George, as well as towards paying off some of our mortgage.

We will be forever grateful and will never forget your kindness and generosity.

Much love, and God’s abundant blessings,

Guest Donor 3 days ago
Sending you all love and hope for some wonderful times together, from a stranger x
$20

Paying to a verified bank account of Nicole Moana
Page Moderated The page has been checked by our team to make sure it complies with our terms and conditions.

Want to get in touch with Anneke Pati?