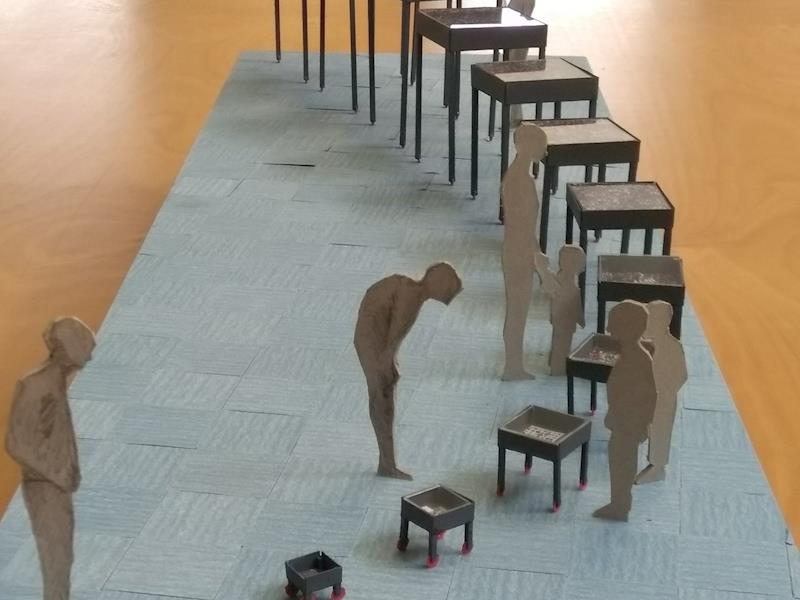 Given by 40 generous donors in 2 years

This Memorial gives a voice to the children who perished in the Holocaust and ensure that such hatred may never be allowed to flourish.

Between 1939 and 1945, 1.5 million children were murdered by the Nazis and their collaborators, including over a million Jewish children, tens of thousands of Romani children and children with physical and mental disabilities. This Memorial, consisting of one button for every child lost, seeks to honour and give a voice to these children.

This project started at Moriah College in Wellington in 2008, where students initiated the collection of 1.5 million buttons to comprehend the sheer vastness of the number, and they received support from all over the world.

The Memorial incorporates a selection of variously sized "nesting tables", each increasing in size and volume of buttons.

The Memorial was launched in November 2018 at the National Library of New Zealand. It will remain there until April 13th 2019, and then progress to Christchurch Central Library. Later this year, it will travel to Auckland and then to other destinations after that

The Holocaust Centre of New Zealand mission is to:

1. Ensure that the memory of the Holocaust remains in the present, and shapes our future.

2. Work and converse with all of NZ society.

3. Teach and encourage people to take individual responsibility for opposing prejudice in all of its forms.

4. Guard against attempts to make any group a target of mass prejudice.

This project aims to raise a base target of $90,000. This would support the creation of the memorial itself, as well as running costs.

Thanks to a private donor, every dollar you donate will be matched.

We launched the Memorial at the National Library of New Zealand in November 2018. This was a huge success. The next stage is to raise the funds required so that the Memorial can travel around New Zealand. This includes transportation and personnel costs, as well as the costs of additional educational material.

Created by, and paying to a verified bank account of, Holocaust Centre Of New Zealand Incorporated (Charity)
Registered Charity A Registered Charity has legal recognition under the Charities Act 2005.
Tax credit Donations of over $5 are eligible for a New Zealand charitable giving tax credit.
Page Moderated The page has been checked by our team to make sure it complies with our terms and conditions.

Given by 40 generous donors in 2 years