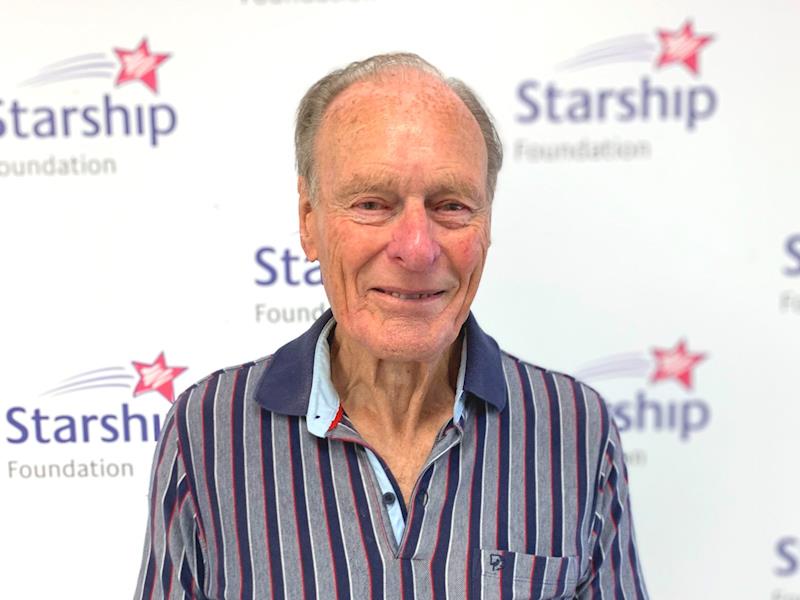 Cause page created in the Health category by Starship Foundation

For his 90th birthday, Vince is doing the ‘SkyJump’ off Auckland’s Sky Tower to raise funds for Starship kids.

Thank you to our (nearly) 90-year-old Daredevil, ‘Vertigo Vince’…

We’ve heard some amazing stories and plans…few more memorable than ‘Vertigo Vince’ and his plan to leap off a building.

That sounds a bit dramatic, so let us explain…

Vince’s connection to Starship began in 1990 when he worked in purchasing for the Auckland District Health Board. He bought much of the equipment and supplies we used when Starship opened.

That was fifty years ago…Vince is turning 90 on February 10th this year.

At this stage of their lives, most people would be happy with a morning tea and cake to celebrate their birthday…

Vince is not most people.

When he was a kid, his mother always said he was a daredevil…

A couple of years ago, he bungee jumped off the Auckland Harbour Bridge. But his thirst for adrenaline remained. So…

For his 90th birthday, Vince is doing the ‘SkyJump’ off Auckland’s Sky Tower…a 192 meter, 53-floor drop. Vince will hit speeds up to 85 kph during his (tethered) freefall.

He doesn’t want presents for his birthday, either. He’s asking people to donate to the Starship Foundation and ‘sponsor’ his jump instead.

In an informal office survey, few or no Starship Foundation staff members expressed enthusiasm for jumping of the Sky Tower themselves…despite many being at least half Vince’s age. So good on you, Vince!

Please support Vertigo Vince's leap of faith for the children at Starship by making a donation.

Thank you Vince, and thank YOU for your support!

Vince is also separately supporting The Royal Marines Charity, whose mission is to provide support, advice & friendship to serving & retired Royal Marines, their families, those who aspire to join, and those with close links to the corps. More info here: https://rma-trmc.org/

The Starship Foundation relies on the generosity of its donors to help them fund items from the hospital. From the the smallest comfort items for patients, through to lifesaving equipment, and community support services to prevent children becoming ill.

Funds will be invested in impact programs which focus on:

- Equity to ensure no child is left behind

- Prevention to support children in the community

- Programs which save and extend lives

Dianne on 16 Feb 2021
You are a legend! The children and families of Starship cannot thank you enough!
$10

Created by, and paying to a verified bank account of, Starship Foundation (Charity)
Registered Charity A Registered Charity has legal recognition under the Charities Act 2005.
Tax credit Donations of over $5 are eligible for a New Zealand charitable giving tax credit.
Page Moderated The page has been checked by our team to make sure it complies with our terms and conditions.

Want to get in touch with Starship Foundation?