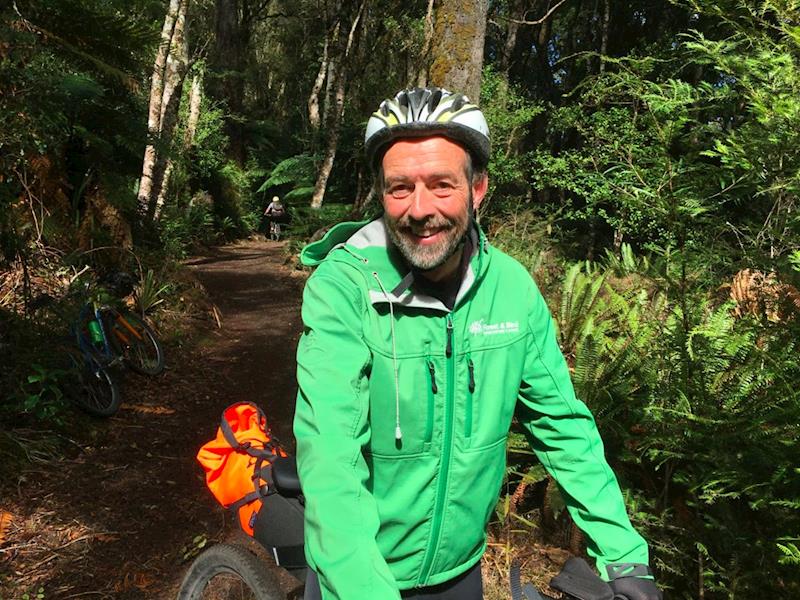 On March 8th, I am setting off on the Tour Aotearoa, ( www.touraotearoa.nz ) a mountain biking event from Cape Reinga (at the northern tip of the North Island) to Bluff (at the southern tip of the South Island), a total of 3000km.

At about the half way point, the cycle route passes though Pelorus Bridge reserve, where there is a Forest & Bird sponsored project to help save a population of the rare and endangered pekapeka (long-tailed bat), one of only two endemic land mammals (both bats) in New Zealand/Aotearoa.

My aim is to raise at least $6000 ($2 per kilometer) for this project - so please sponsor me. One cent per kilometer would be great, 10 cents even better! You can even follow my progress in real time here: https://touraotearoa2020.maprogress.com/?bib=AM?, or read my blog and enjoy the ride vicariously at: https://andystouraotearoa.blogspot.com/

Pelorus Bridge Scenic Reserve, or Te Hoiere, is home to one of the last remaining populations of long-tailed bats in Marlborough. A team of volunteers lead by Forest & Bird bat woman Gillian Dennis are currently underway with a three-year project to try and learn more about these little creatures and put plans in motion to save their vulnerable populations.

Before humans settled in New Zealand about 700 years ago, three bat species were widespread and abundant. Now bats are rarely seen. One species (the greater short-tailed bat) is already extinct and without intervention, the other two species (short-tailed and long-tailed bats) will probably be extinct on the mainland within 50 years. The ongoing decline in New Zealand’s bats is a result of the mammalian predators (rats, stoats and cats) that arrived with humans.

Support the project today and help be a voice for nature in New Zealand by sponsoring my trip to help protect the highly-endangered long-tailed bat.

Finally - a little thanks to my gear sponsor - iride Wellington (iride.net.nz) for generous discounts on my bike and gear. Friendly and helpful staff too!

Captain K on 15 Apr 2020
It's been awhile since we all launched in lockdown Andy. I've been meaning to donate for this batty cause! Enjoyed following your dot and look forward to Phase II. Love to you and your bubble.
$50
Andy Maloney

Hi Helen, Thanks heaps! See you after lockdown...

Asier & Itxaso on 26 Mar 2020
From Asier and Itxaso. Thank you for everything Andy
Private
Andy Maloney

Thanks Asier! Had to stop cycling in Wellington for now due to the virus.... will finish later in the year

Thanks Phil ! Back in Wellington - hope to finish the cycle later in the year

Thanks Pam! May call on you when I get the chance to finish the ride (eventually !!)

Thanks Celia! Hope you managed to get home ahead of the lockdown - will you finish your ride later?

Paying to Forest & Bird
Tax credit Donations of over $5 are eligible for a New Zealand charitable giving tax credit.
Page Moderated The page has been checked by our team to make sure it complies with our terms and conditions.