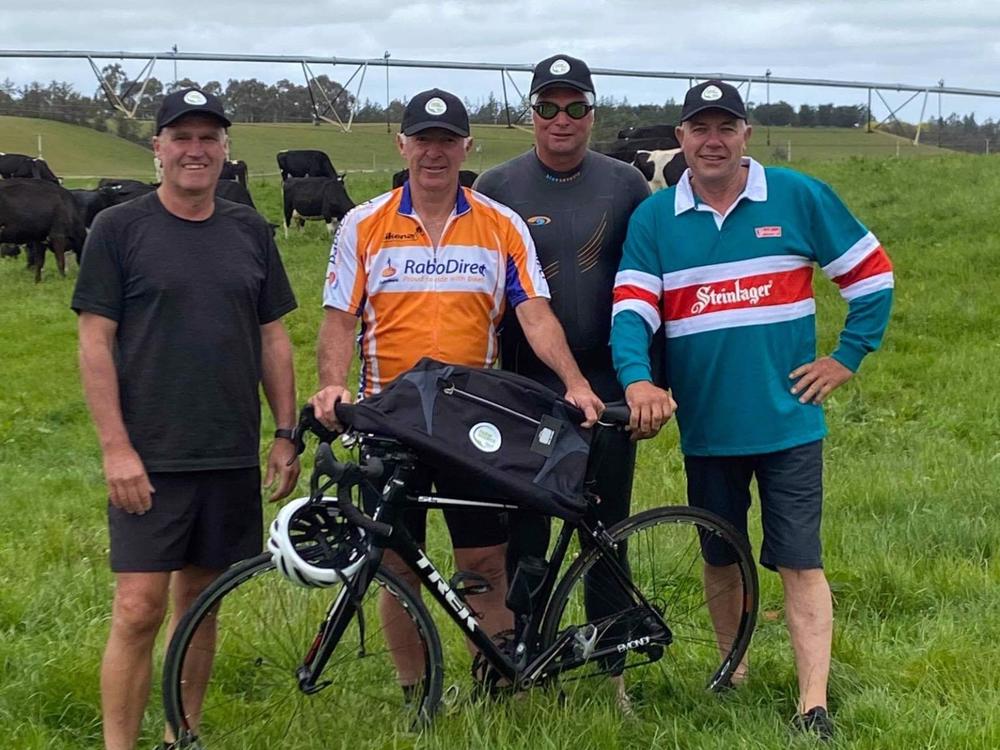 The Milkmen Making Money for MS and Blind Foundation

Four Glenavy dairy farmers were all enjoying a beer together, mainly to complain about all their aches and pains from years of hard graft on the farm, when one of them threw out the idea they should do Wanaka Challenge 2021. All in the twilight of their sporting careers thought it was a 'great idea', with the aches and pains of 40 years of farming slowly disappearing with every beer drank, it was settled.

Hame 'the fish' Mcfarlane will do the swim, Allan 'Pedals' Gibson will do the bike and the master himself Andrew 'The Kenyan' Mcfarlane would complete the run, with Paul 'paper shuffler' Derwin as the team manager. With a lineup like that the course record looks to be in serious danger.

The 'Milkmen' as they like to refer to themselves as, didn't want to stop there, they wanted to put themselves through this torture for a good cause and raise money that would be donated to the Multiple Sclerosis Society of New Zealand and the Blind Low Vision NZ. Both charities extremely close to our heart.

The latest training update we have received from the Manager Mr Paul 'paper shuffler' Derwin is that things are tracking 'ok' at this early stage with Allan 'pedals' Gibson in need of a bike, Hame "the fish' Mcfarlane started his training by fetching duck decoys out of the pond and Andrew 'The Kenyan' Mcfarlane completed his first few runs with no reported injuries, to the mail box and back which totaled 600m.

We will keep you posted on the latest training news throughout the Milkmens adventures. In the meantime spread the word as its all about donating the money to these fantastic charities.

Both Multiple Sclerosis NZ and the Blind Low Vision NZ run extremely close to our hearts with people we love being affected everyday. We are aiming to raise money to support these charities in any way we can.

Created by Georgie Mcfarlane
Donations to this page will be split evenly between 2 payees:

Paying to Blind Low Vision NZ
Tax credit
Donations of over $10 are eligible for a New Zealand charitable giving tax credit.
Page Moderated
The page has been checked by our team to make sure it complies with our terms and conditions.