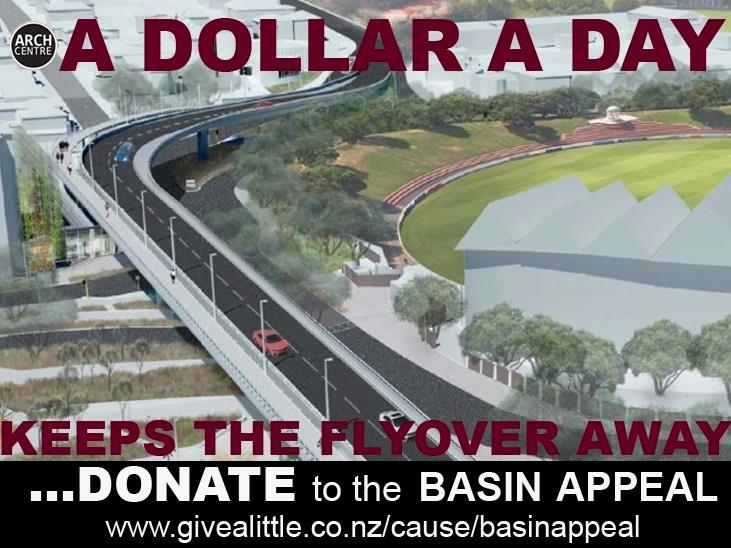 Closed Cause page created in the Environment category by Architectural Centre

Given by 47 generous donors in 10 weeks

The BBBoI was about a flyover.The HighCourt appeal is about key built environment issues. Support ArchCentre & the shape of our future city.

In June 2013 the New Zealand Transport Agency (NZTA) applied to build a 2-lane, 320m long flyover next to Wellington's historic Basin Reserve cricket ground. The Architectural Centre opposed the flyover because we believe that building the flyover will be bad for our city. Wellington is not a city of flyovers, and this proposal would place a flyover within an historic part of the city. The small 19th and early 20th-century houses of Mt Victoria would be dwarfed by the 320m long concrete flyover, which would also block the views down Kent and Cambridge Terraces, and into the internationally renowned cricket ground. We believe that this mammoth structure is not appropriate, and that any urban design and transport issues could be better resolved.

We were an active participant in the Board of Inquiry hearing established to determine whether or not the flyover should be built. The hearing was very much a David vs Goliath contest, with the well-resourced NZTA being opposed by significantly less well-resourced volunteer groups and local residents. It was wellknown that the odds were against us, but we believed strongly that it was important that alternative voice was presented to raise questions that otherwise wouldn't be presented to the Board.

As the hearing progressed it became apparent that the transport benefits of the project had been significantly overstated, that many experts disagreed about the value of the flyover, and that all the heritage experts had concluded that building the flyover would cause negative effects. Most heritage experts agreed that the flyover was an inappropriate structure in this sensitive heritage context. The Board's Final Decision (http://www.epa.govt.nz/Resource-management/Basin_Bridge/Final_Report_and_Decision/Pages/default.aspx) cancelled the application to build the flyover.

This decision was the result of long hours of hard work by the volunteers and lawyers from our opposing groups collectively, as well as the careful consideration by the four Commissioners.

of the proposal. The reasons include the following:

(a) "the expert evidence pointed clearly to the conclusion that the Project would constitute an inappropriate development within this significant heritage area of the City." [1260]

(b) the significant adverse effects related to landscape, townscape and urban design "would not, in our view, be adequately mitigated or offset by the proposed mitigation measures." [1262]

(c) alternative options had not been adequately considered [1276]

In coming to this decision, the Board also found that:

(a) "the quantum of transportation benefits is substantially less than originally claimed by the Transport Agency." [1317]; also [1247]

(c) "there are compelling landscape, amenity and heritage reasons why this Project should not be confirmed. The Basin Bridge would be around for over 100 years. It would thus have enduring, and significant permanent adverse effects on this sensitive urban landscape and the surrounding streets. It would have adverse effects on the important symbol of Government House and the other historical and cultural values of the area." [1327]

The NZTA has appealed the decision, asking the High Court to overturn the initial decision. The appeal includes questioning law related to how alternative designs are considered, and issues of urban design and heritage. This appeal may establish important legal precedents which could have long term ramifications for the interpretation and application of the Resource Management Act (RMA), and the shape of our city for future generations. The Architectural Centre opposes the NZTA position because we believe the flyover is not appropriate for this part of the city, and that aspects of the appeal - if endorsed by the High Court - will not support good decision-making about the design of our built environment. We are fundraising to cover the costs of our legal representation at this hearing.

We are a party to the High Court appeal opposing the NZTA, and we are fundraising to cover the costs of our legal representation in this hearing. We were one of the main opponents to the Basin Reserve flyover during the 72 day-long Board of Inquiry. We are participating in the High Court appeal because we do not support the building of the flyover at the Basin Reserve. We believe there are better urban design solutions for Wellington.

The Architectural Centre is an incorporated society and registered charity. Its membership are people who care about architecture, the arts, the built environment and Wellington City, and includes architects, designers, engineers, planners, artists, academics and others. Incorporated in 1946, we represent both professionals and non-professionals interested in the promotion of good design. Early in our history (in 1948) we proposed new ways of thinking about Te Aro in our exhibition Te Aro Re-planned (see image). We have proactively facilitated discussion about design through exhibitions, public talks, and participating in local and regional government decision-making about our city. Our involvement in the Basin Board of Inquiry, and now the High Court appeal, continues this long association with bettering Wellington's built environment. 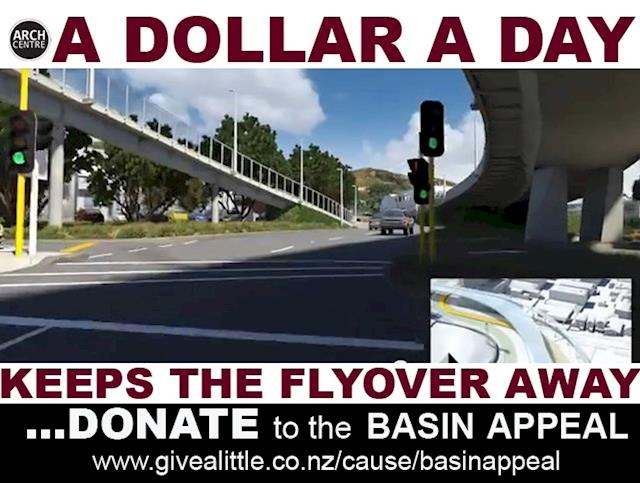 A v. brief update on Day 1 at the High Court

Matthew Casey, who is the lawyer leading the NZTA case, began his opening submissions today. He largely spent the day introducing the judge to the project, and to what the NZTA see as the relevant chronology of the case and related documents. In the afternoon he began his legal submissions which related to the Board of Inquiry's use of the Regional Policy Statement and the District Plan in relation to transportation, heritage and amenity (e.g. open space), and how the Board applied parts of the RMA (esp s171(1) which states the criteria on which the Board made its decision). NZTA will continue presenting their case tomorrow, and if they finish, the WCC will begin to present their submissions.

Thanks to you all for your donations to www.givealittle.co.nz/cause/basinappeal - they are hughly appreciated

Created by, and paying to a verified bank account of, Architectural Centre (Charity)
Registered Charity A Registered Charity has legal recognition under the Charities Act 2005.
Tax credit Donations of over $5 are eligible for a New Zealand charitable giving tax credit.
Page Moderated The page has been checked by our team to make sure it complies with our terms and conditions.

Given by 47 generous donors in 10 weeks