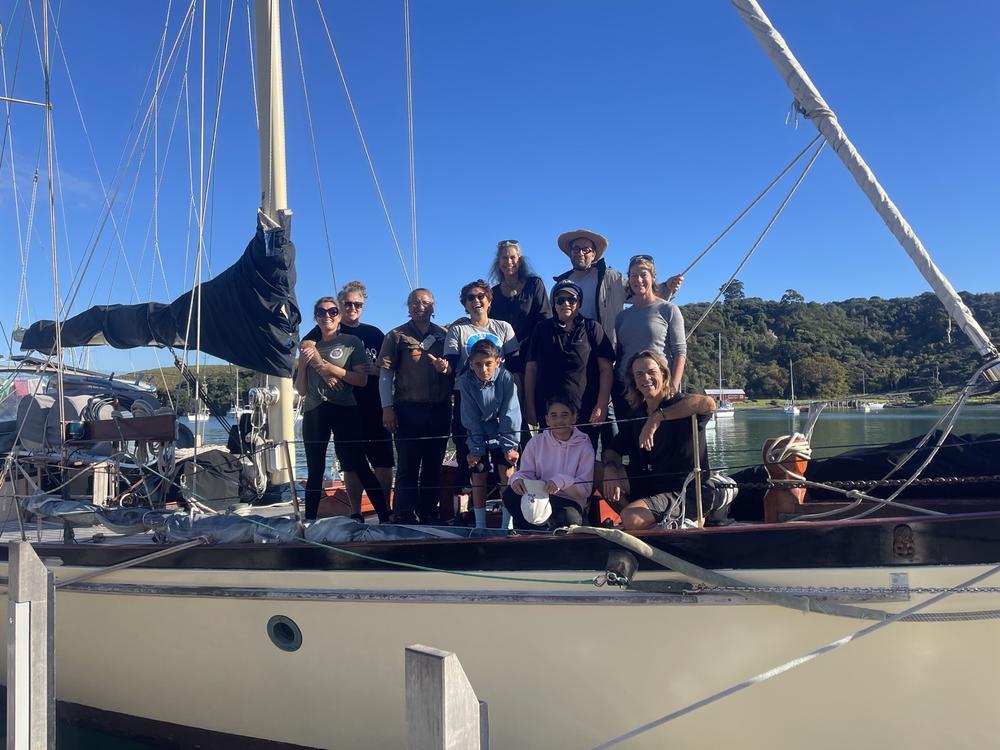 Help the Waiheke community (and beyond) rally in support of a sailboat casualty to Cyclone Ruby - let's keep Sea Stewardship alive!

On the 15th of December Ben and Ari's sailboat the Rosalie Clare (a Lidgard 70ft ketch), succumbed to cyclone Ruby on the rocky shores of Waiheke Island, Aotearoa New Zealand. Ben and Ari have made a big impact on many lives on Waiheke and across the South Pacific with their generosity in sharing the Rosalie Clare with many community organisations, families, tangata moana and young people. This was their home, their story, their sanctuary and a vessel for highlighting and creating meaningful change for the health of our oceans and people of many island nations. The Rosalie Clare is not salvageable, the skeg and rudder are ripped off, the forefoot badly damaged and the integrity of the aft section is impaired. She was also not insured.

We are asking our community of Waiheke and across the South Pacific and beyond to please donate to this fund to support Ben and Ari with their recovery from this tragic loss, so they can continue to do the important and timely work on behalf of our oceans, our people and our planet.

Ben & Ari (and Rosalie Clare) are a precious part of our larger Waiheke Island community. They have shared their love of the ocean with us, and contribute deeply to the protection and regeneration of Tikapa Moana and beyond.

Initial disposal & recovery costs related to the wreckage, and ultimately, a lifeline to help keep Sea Stewardship alive & well, so that Ben & Ari can continue their important advocacy work on behalf of our oceans worldwide.

Here is an update of the status of our ship and how your donations helped us to cope with the overwhelming task of salvage.

We apologize for not keeping you up-to-date more often on the salvage operation through this Give-a-little site. We were quite overwhelmed with the impact that the catastrophe had on our personal lives and had to limit our communications with the community through FaceBook and online- and local newspaper.

I wish I had communicated better with all our donors personally, because ,apparently, a few people made assumptions that we didn’t use the money for the salvage costs. We were trying hard to find ways for repurposing hardware and minimizing landfill, as well as keeping the labor costs local. The plans were to turn our wrecked vessel into a playground with a pirate ship theme at Talking Tree Hill Nature School. They were very enthusiastic about the idea and we were super excited that our shipwreck would be put to a good cause.

The process of the planning, design and waiting for the official approval by Auckland council took more time than foreseen. Another massive storm passed over the island and broke our ship into a million bits, leaving flotsam all over Matiatia Bay. Of course we immediately hired a local contractor and started the beach cleanup. This was the point where several people (understandably) got upset. Less understandable was the blaming and shaming that happened on social media by people who didn’t bother to find out the true story that had been published in Stuff News and Facebook.

It was a huge challenge to stay sane during this tragic period. The support that we received from the community helped us to deal with the day-to-day reality of the catastrophe. We were not prepared for the public and personal attacks on social media, and the lack of empathy from a few individuals broke our hearts. Thankfully, the big hearts in our community continued to uplift our spirits.

The initial salvage estimates were in the vicinity of $70,000. We had lost our home and did not have the means to deal with this kind of expense. Much effort was spent trying to lower that price by keeping it local.

In the end the bill from the salvage company was $57,587. Thanks to the donations on Give-a-little, we could offer the Auckland Harbourmaster $12,000. We paid another $7,500 for private contractors, tools, disposal costs etc. Besides that, there was revenue of recycled materials (aluminium, stainless steel and leaden keel and ballast) that added up to $15,232. We hope to achieve transparency with this update and are willing to answer anyone who has specific questions.

We are incredibly grateful to our steadfast friends and volunteers who showed up when we needed them most. We all are faced with challenging times. Young and old, rich and poor, this global transition affects everyone. Apart from losing our home, we have the feeling that we lost part of our identity. But our belief in Sea StewardShip still stands strong. We are passionate about environmental ethics and cherish the ocean, devoting our lifestyle to protecting it.

A very kind soul has gifted us with the use of a 42 foot catamaran named “Vida”. This opportunity offers a new life to continuing our work in the Hauraki Gulf.

Thank you again for your kind support and, one day, we hope to see you on board on one of our environmental expeditions.

Kathryn on 08 Mar 2022
Kia ora Ben and Ari, We donated earlier and are very happy for you to have used that donation in any way you saw fit. You have been real community people since you arrived as well as lifelong champions for the environment and we were moved by the sad loss of your boat - something similar had happened to us in the past -but you are also such great people and we wanted to support you. Go well.
Private
Ari Vanderschoot

Thankyou Kathryn, That is very kind of you. We are incredibly moved by the depth and sincerity we have received since we sailed into the Waiheke community. We couldn't have landed in a better place and we are ever so grateful for all the love ,appreciation and support. Thankyou soooo much!

Thankyou Paula... It helps a lot! I so appreciate you hangin in there with us all these years and your support when the chips came tumbling down. Hope you are enjoying the approach of summer and the delightfully spicy color and culture of New Mexico. Hugs. Ari

Thankyou both from the bottom of both of our hearts. That is very kind of you!

Thank you Ted! That means the world to us! Stay tuned as we turn this good ship into a play ground.

Created by The Waiheke Community

Paying to a verified bank account of Ari Vanderschoot
Page Moderated
The page has been checked by our team to make sure it complies with our terms and conditions.

Want to get in touch with The Waiheke Community?