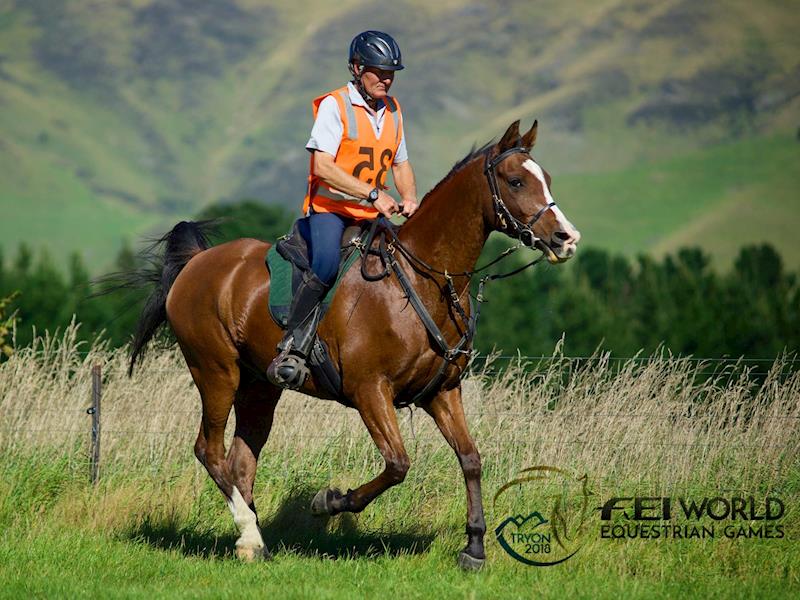 Given by 6 generous donors in around 3 months

A page set up to help get Philip Graham and his super steed Rosewood Bashir to the World Equestrian Games to be held in September.

Philip Graham (Oxford) has been selected along with Jenny Champion (Masterton) in the team of two to compete for New Zealand and the World Equestrian Games in the Endurance event. The competition at the games will be a 4* event run over 160km held at Mill Spring, North Carolina at the Tryon International Equestrian Centre in September this year.

Philip has been an active member in the Canterbury Endurance and CTR club since so long ago!! His support and dedication to the club have been hugely significant, particularly in his ability to design and mark competition tracks. This dedication has allowed the Canterbury Club to run many spectacular Island and National Championship competitions throughout the wider Canterbury area to standard recognized as 3* by the International Equestrian Federation (FEI).

Rosewood Bashir (Benny) the 15 year old Gelding on which Philip has been selected on holds a special place in the hearts of Philip and his wife Helen Bray. Benny was purchased as a foal off a local Canterbury breeder Helen Chambers, his mother is a mare that Bray bred and Benny’s bloodlines trace back to the stallion, Sky Hawk, whom which Bray imported from England many years ago.

This is Philips second opportunity to represent New Zealand at the World Equestrian Games. Philip was also selected in 2006 aboard Wolfgang Amadeus where they competed in Aachen, Germany. Philip returned home with Wolfie and continue to compete at a National level, last year achieving 7000km of completed endurance competitions, a fete matched only by two other horses in New Zealand history.

The selection into the New Zealand team is a true testament to Philips dedication to the sport and his horses. The countless and continued results Philip has achieved in the last 17 years of competing in Endurance is vivid demonstration of his horsemanship and the robust partnerships he holds with his horses. Philip is a true ambassador to the sport and the Canterbury Club.

While being named in the New Zealand team is a huge privilege it does not come without cost. In order for the horses and riders to be able to compete in Carolina they will be faced with a bill for approximately $80,000 each in return flights and quarantine costs.

Any financial support you maybe able to provide will be hugely appreciated!!

I am setting up this page to support a good friend Philip Graham as he takes his horse Rosewood Bashir aka Benny to the World Equestrian Games in September.

Money raised will be used to fly Benny from Christchurch to the USA and back again.

Paying to a verified bank account of Philip Graham on behalf of Benny's trip to WEG
Page Moderated The page has been checked by our team to make sure it complies with our terms and conditions.

Given by 6 generous donors in around 3 months