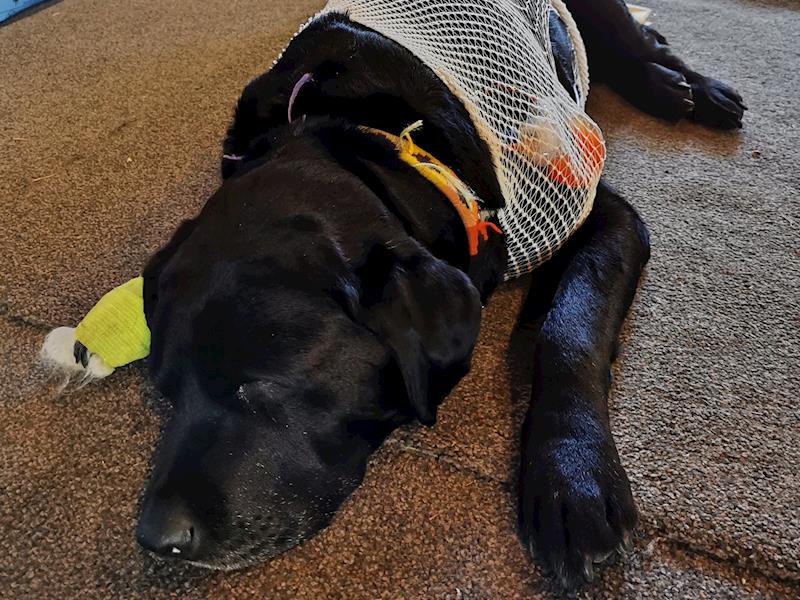 Bonnie got so sick, so fast we had to carry her to the car in a blanket stretcher.

Closed Cause page created in the Animals category by Melissa Hinves

Our beautiful dog, Bonnie, suddenly had to have an unexpected 3.5 hour complex operation to remove an unusual necrotic mass.

I'd more usually be on this page to chip in a few dollars to help someone. However, I have set up this page as we really do need some help this time.

A week and a half ago the oldest of my 3 Labradors, Bonnie became rapidly very, very sick. One minute playing in the river, the next unable to walk to the car to get to the vets and not interested in any food. For a Labrador that's a very ominous sign.

Bloods, x-rays and scans quickly showed a massive growth in her abdomen. Inflammatory markers were very high. It was not looking good. She was very, very sick. We've had to make some big calls every step of this journey. This was the first. We chose for exploratory surgery hoping it might be benign and removable, but took the kids to say goodbye in case we had to make a final call mid op. They have never gone through losing a pet, so we knew they should see her in case of the worst.

The vet called mid-surgery with the words, "this is very complicated", he described it as unusual a large, non-tumorous, fibrous, fluid-filled growth extending from her uterus so deeply into her pelvis the vet could not ascertain where it ended. It was wrapped around and adhered to many organs and tissues. The vet felt she'd lived with this for many years since birthing her litter and with no ill-effect, but now this large growth was suddenly necrotic, dying off and that was killing our dog. I think I said, "We've come this far, let's give her a chance".

3.5 hours of surgery later they managed to remove 80% of the mass, it was unclear if her ureter was damaged in removal, and whether enough of the mass had been removed to give her a chance. 2 days later, still critical her red blood cell count was less than half of that when she went in, albumin levels negligible. Her body's ability to heal itself was non-existent. They carefully advised us that there was no more they could do medically for her, only she and time could work any recovery and coming home was her best chance. It also meant we had time with her if we had to say goodbye.

The next 5 days were traumatic; the fluid draining to a collection bladder accelerated, possibly signifying worsening infection; occasions of distressed panting having us wonder if her organs were now failing.... but then a week to the day of the operation a blood test showed her red blood cells were finally regenerating and the inflammatory markers had gone from "off the scale" to "close to normal". The vets face said it all.

We have a long way to go yet, the drain is still in her abdomen, she still needs veterinary support for some time to come but we are optimistic now. Her energy levels are back up. She is begging for food.

Not through stupidity, but our own budgetary reasons we unfortunately do not have pet insurance. So, we have been tripped up in a big way. I'm reaching out to ask for help for a proportion of Bonnie's bill, we will find a way to cover the ongoing bill ourselves, but we need help to cover the early portion, in particular for the 3.5 hour complex operation involving 2 vets - a big stretch for anyone. We'd love your help please.

Thank you so much for reading through this. Thank you in advance for your generosity - from our family, from Bonnie, and from her two daughters who are delighted she is back to washing their faces for them even though they are 5!!!

We would love your help towards the early portion of the medical treatment for our dog, in particular for the complex 3.5 hr, two vet surgery.

Carole on 26 Jan 2021
Hope this helps a bit with poor Bonnie's bill. Really pleased for you that she's come through this. Give her a hug from Nana.
$100

Created by, and paying to a verified bank account of, Melissa Hinves
Page Moderated The page has been checked by our team to make sure it complies with our terms and conditions.

Want to get in touch with Melissa Hinves?