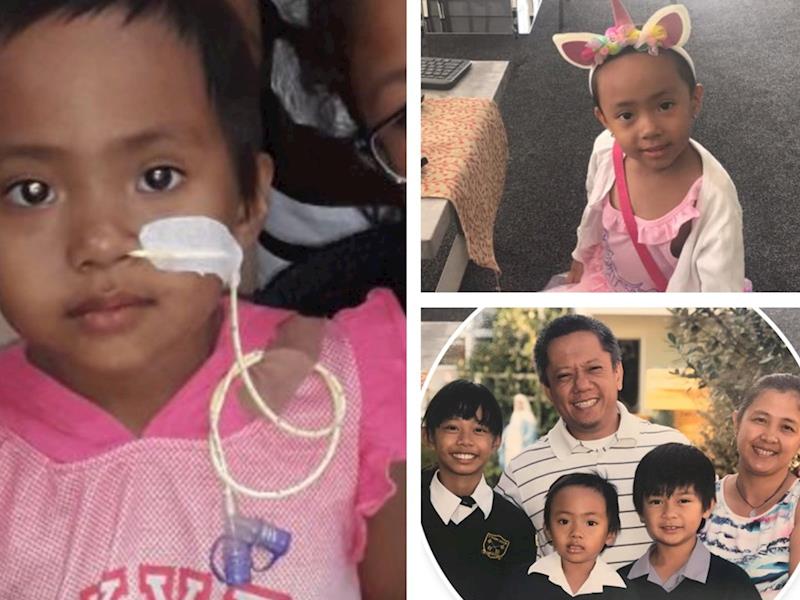 Let us help Lauren and her family on this tough time of their lives.

Maeve Lauren Grana, known as Lauren to her family and friends is a five year-old Filipino girl who is suffering from Atypical Teratoid Rhabdoid Tumour (ATRT). ATRT is a very rare brain and spine cancerous tumour. The original plan of having radiation treatment for 7 weeks starting on the 8th of April 2019 has been cancelled. Because the tumour has been growing fast, she is now undergoing an intensive five-day radiation treatment in Auckland. It started last Tuesday, the 2nd of April and should finish on the 9th of April 2019. There will be no more treatments after these and parents were told to give Lauren a quality life for the remaining times.

We do not personally know the Grana family and just learned about their situation mid of March 2019 through one of our KPF brothers in Wellington. Last 25th of March 2019, we visited their home in Palmerston North. Lauren is quite a very reserved yet curious sweet child. She is the youngest among the three children of Mr Marsinel Grana and Mrs Vivian Grana who migrated to NZ in 2007. They lived the majority of their life in Wellington and have moved to Palmerston North only in December 2018. Marsinel is the sole earner in the family. Vivian, who was supposed to do part time jobs when Lauren starts schooling, had to look after her full time now.

Lauren’s medical journey started after she fell on her tail bone by end week of March 2018 and the pain emanated since then. They’ve gone to several GP check ups as the pain severely increases every week. It was only when Lauren’s tummy grew bigger and bigger that she has been recommended to go to the Emergency Department at Wellington Hospital. The MRI scan confirmed that there is a significantly size of tumour on the lower portion of her spine. The increasing severe pain was due to the nerves being squeezed by the tumour. The tumour was also blocking the signal path to the brain. Thus, the brain does not know that her bladder and bowel are already full making her constipated, and her tummy grew big.

She’s been flown to Starship Auckland for the surgery to remove the tumour. Unfortunately, the tumour was malignant and very aggressive. She’s then flown to Christchurch for a-five-month cancer treatment.

Lauren has undergone the following treatments already; Chemotherapy, Radiation Therapy, High-Dosage Chemotherapy with Autologous Stem-Cell Transplant. Lauren was in remission after the treatments, which ended in September 2018. Her first MRI post treatment results showed that no new tumour had grown. Post treatment monitoring is done every three months, however, the 2nd MRI post treatment showed that the new tumour have grown. Two on her brain and one on the spine, above the previous original tumour she had.

With the short amount of time that Lauren has left, we are knocking on your kind hearts to help her family any monetary assistance that you could share. A contribution of any amount will go a long way towards paying off the Grana Family’s ongoing expenses and to help give Lauren a quality life on the remaining times.

I am part of the KPF Outreach Mission Team

KPF is the fruit of an assembly of families who gathered together in regular prayer meetings of praise, worship and witnessing of God’s love. It was formalised on the 16th of April 2011 and named KAPATIRAN PRAYER FELLOWSHIP (herein called Kapatiran, KPF or the Community).

KPF is catholic charismatic renewal community. Its focus and the core of yearly spiritual activity is on evangelization through the KPF Life in the Spirit Program. Bringing people to renew their personal relationship with the Lord and helping those that will commit to a life filled with the gift of the Holy Spirit.

Lauren and her family are now back in Palmerston North. Funds will continue to be used for ongoing living costs.

You can read the full update here- https://givealittle.co.nz/cause/call-for-help-on-laurens-remaining-time/updates

To assist Lauren's family with the ongoing costs while Lauren is undergoing radiation in Auckland.

Our dear Lauren has now joined our Creator  15 September 2019

It is with heavy heart to inform everyone that our brave little fighter, Lauren Grana passed away last night at 9:10 PM. She battled a very rare cancer for almost two years.

Rest in peace our little angel. You are now free from pain and suffering. You will always be our special little girl and will be remembered and loved forever.

Lauren's wake will be at the Grana's residence at 201 Pacific Drive, Palmerston North. Interment is on Wednesday at 1:30 at the Cathedral of Holy Spirit, 197 Broadway Avenue.

Thank you very much for being part of Lauren's journey here on Earth. Let us join together and pray for her soul as she journeys to eternal life. We would also like to request to include her parents, siblings and the whole bereaved family back in the Philippines to remain strong during this difficult times.

We are again knocking on your kind hearts for any amount you can share to assist them with the wake and burial expenses. God bless you all!!

Cristiano on 17 Sep 2019
Our thoughts and prayers are with your family in this time of sadness. May she rest in peace.
$60

Paying to a verified bank account of Marisnel Grana
Page Moderated The page has been checked by our team to make sure it complies with our terms and conditions.

Want to get in touch with Carmela Laylo?