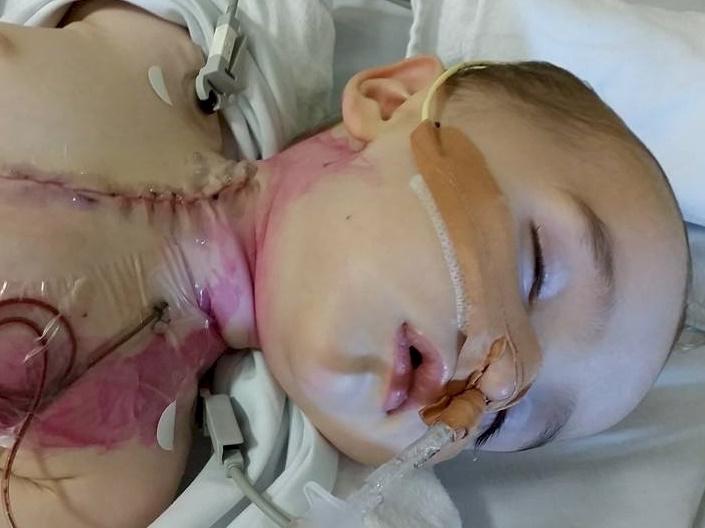 On December 15th 2014, 8 month old Devon swallowed a large lithium-ion battery which trapped inside his oesophagus. Mixed with his saliva this caused an electro-chemical reaction causing extreme corrosion burns to the soft tissue of Devons' trachea ( breathing tube) and oesophagus ( feeding tube). Devon is currently in pediatric intensive care. Since the accident Devon has had 5 surgeries including one on Christmas eve where his chest was opened up. His heart and lungs were stopped and kept alive by a cardiac bypass machine while surgeons attempted to repair and cut out as much burn tissue from his trachea and oesophagus.

Prior to swallowing the battery, Devon was a happy and healthy baby boy meeting all his milestones. Devon now faces an uncertain future and years of medical treatment ( at least 8 months in hospital followed by 3 years plus of further treatment). Even then Devon may never breathe unassisted and possibly never talk or make a sound again.

Devons' mother Amanda has worked hard over the years to establish her own business in human resources and employment law. For the moment she has had to give up her own business which has reduced her income. Amanda has been at Devon’s bedside constantly since his devastating accident. She also has two other children aged 5 & 15, one is with her in Auckland and the other is staying with his father.

If you could give anything to this family, to enable Amanda to stay beside her darling Devon, so she can focus on his medical needs without the worry of financial hardship it would be greatly appreciated.

I went to school with Amanda and felt the need to help as I have children of similar ages. This must be a parents nightmare. My husband also recently suffered an accident (although he will recover) I understand what it is like to lose your income since we were also self employed and how hard this is for a family on top of dealing with the medical world. I am also an ex nurse. Having worked in pediatrics I feel for what families go through. They need all the help they can get.

Update on Devon’s Medical Condition for Give A Little

Devons trachea collapses and flattens so that air cannot get into his lungs. This is called tracheomalacia and is an abnormal collapse of the tracheal walls. Think about breathing in and out: When you inhale, your chest expands, and when you exhale, your chest wall contracts, to help push the air out. This action puts pressure on some internal parts of the body, such as the heart, the lungs and the trachea.

A healthy trachea is supported by a series of “c-shaped” rings made of cartilage that help your airway to stay open during exhalation. Tracheomalacia means that these rings aren’t strong enough or in Devon’s case the surgeons have had to remove so much of his trachea due to a fistula and scar tissue for the orginal corrosion burn from the battery there isnt enough support left now to keep the trachea open.

The trachea needs to be open during inhalation or exhalation, and if the trachea becomes narrowed or flattened then it’s very hard to breathe. Devon has severe tracheomalacia which can be life-threatening as breathing in or out becomes impossible as the trachea narrows so much it is closed as the walls collaspe into each other.

Vocal fold paralysis (also known as vocal cord paralysis) is a disorder that occurs when one or both of the vocal folds don't open or close properly. Paralysis of both vocal folds is rare and can be life threatening.

The vocal folds are two elastic bands of muscle tissue located in the larynx (voice box) directly above the trachea (windpipe). When you breathe, your vocal folds remain apart and when you swallow, they are tightly closed. When you use your voice, however, air from the lungs causes your vocal folds to vibrate between open and closed positions.

If you have vocal fold paralysis, the paralyzed fold or folds may remain open, leaving the air passages and lungs unprotected. You could have difficulty swallowing or food or liquids could accidentally enter the trachea and lungs, causing serious health problems (such as aspirational pneumonia which Devon has already survived once).

The tracheostomy fixed the issue that Devon has with his vocal fold dysfunction however the tracheomalacia remained an on going conern.

However after the tracheostomy and over time it became evident that trache (tracheostomy tube) was stenting open his trachea. This was surprising. So as Devon became stronger and regain his health he has been able to be slowly weened off the ventilatin machine and is breathing using the tracheostomy.

At this point we were finally moved from intensive care to the Ward of Starship!!! YAY – this was hugely significant as it mean that Devon was out of imminant life threatening danger. I can not explain to you the relief this aspect was for me.

However movement of Devon from intensive care to the ward added other complications such as the requirement for a parent to be with Devon 24 hours a day 7 days a week. So I had to work out how I could manage everything with Mikayla and Brayden. I am and will enternally be very grateful to my mother (and her partner Noel) as she agreed to came up to Starship Hospital/ Ronald McDonald House to support and helped me with my other two little people (well Brayden at nearly 16 years old isnt exactly little but you know what I mean ?) .

Ronald McDonald House is a wonderful place and I think they have made a time in our life that would have been impossible manageable. The staff truly do an amazing job in support and helping family member of sick children survive the challenges.

So back to Devon’s recovery, after the move to the Ward in Starship (beginning of June) discussions commenced about what next initially we were advised that Devon could go home before the oesophagastomy could be reversed and the reconstruction of his oesophagus could commence which is roughly scheduled for commencement in January or February 2016.

However it soon became evident that this would be to risky because Devon could very easily dislodge his extra small trache tube and he can not breath at all with out (he would sufficate and go into cardaric arrest within 4 minutes). This was too much of a risk to take so it has been decided that Devon must remain in Hospital until after the oesophageal reconstruction which could be another whole year away. There is no guarantee of Devon being released even then it will deoend on how is overall medical situation is but I have to have hope of a more normal life at some stage for him.

So we are now awaiting the outcome of the up and coming discussion between Tauranga Hospital and Starship Hospital to decide where Devon will wait out the time until the oesophageal reconstruction.

I only wish Devons insides were looking as good as his outsides. He is still very much at risk with his airway being so tenuous. So there is still a very long way to go yet but we might be able to come home to Tauranga Hospital while we wait for the next stage to start.

Paying to a verified bank account of Amanda Hacche on behalf of Devon
Page Moderated
The page has been checked by our team to make sure it complies with our terms and conditions.

Want to get in touch with Rachael Sayers?

19 questions have been asked already. Check them out and ask yours here.