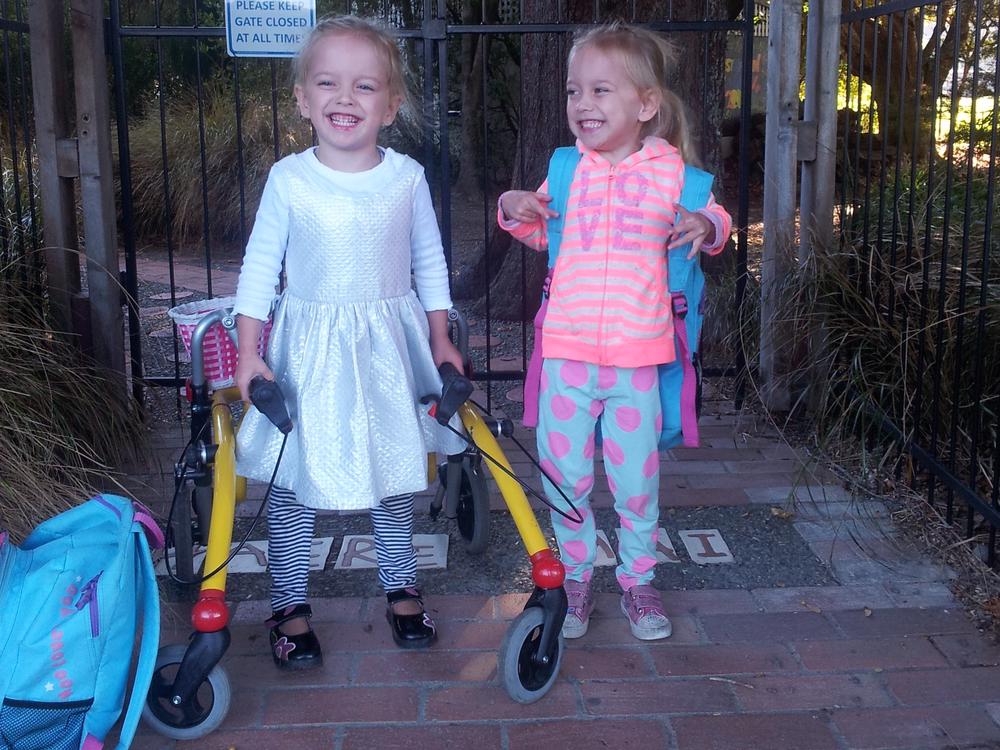 Help us raise the funds needed to pay for life changing surgery for our little girl.

Our twins, Georgina and Olivia,were born in Christchurch at 25 weeks and had a literally shaky start to life, as they were born 13 hours before the February 2011 earthquake. But we have always considered ourselves so very lucky, because they survived all their set backs  and we were able to bring them both home five months after their birth.

But the journey did not stop there. Because of a brain bleed following her birth, Georgina was diagnosed with a form of cerebral palsy called spastic diplegia. The spasticity in her legs is reduced through medication and 6 monthly botox injections, however, this is not a long-term solution. Already the spasticity has caused Georgina’s hips to become deformed and she will need to undergo hip reconstruction in a few years’ time.

Georgina has had to work hard to do the things we take for granted, like walking, eating and talking and as she has gotten older the gap between her sister and friends has been widening. So, we began to ask what other treatments were available to her, which was when we were told about a specialist spinal surgery called Selective Dorsal Rhizotomy. After looking into it we found out that Georgina is a very good candidate for the surgery.

Performed at the St. Louis Children’s Hospital, they will permanently cut the highly spastic nerves in her spine, leaving the good ones intact. A week later she will have orthopedic surgery to lengthen the tendons in her legs. Together, these surgeries will allow Georgina to learn to walk properly, run, jump and dance because the spasticity in her legs will be permanently reduced. She has such determination to participate to the fullest in her life, she loves to sing and dance and won’t be left out of anything her sister or friends are doing. This surgery will give her that chance. One outcome we have been told to expect is her ability to walk independently in all environments, which will mean no walker or wheelchair.

Because this surgery is not funded we need to raise the $100,000 needed for the surgery, but we are determined to get Georgie there and give her the best chance of reaching her full potential.

Funds raised will be used to pay for Hospital costs, post-operative rehabilitation, flights and travel expenses to and from St. Louis Children’s Hospital in the USA.

Joy and Greer on 26 Jan 2018
Georgina...your smile would light up any room..you are so precious to your beautiful sister and yo your wonderful mother. We have three little grand daughters who, just like you, are full of courage and expectation and so we know that you will take your challenge and give it your all. With Much love;Joy and Greer
$100

Logan on 25 Dec 2017
Merry Christmas, and a happy 2018! I hope this goes a small way to getting the required surgery for your daugher. Best Wishes, Logan
$175

Auckland Movie Fundraiser on 07 Dec 2017
It’s not quite the target amount hoped for but we’re very grateful to be able to contribute to Georgie’s journey. Much love, your Auckland fans xx
$500

Guest Donor on 28 Nov 2017
Wishing you all the best to reach your target and get Georgina to the States for this treatment.
$20

Created by, and paying to a verified bank account of, Siobhan Allen on behalf of Georgina
Page Moderated
The page has been checked by our team to make sure it complies with our terms and conditions.

Want to get in touch with Siobhan Allen?