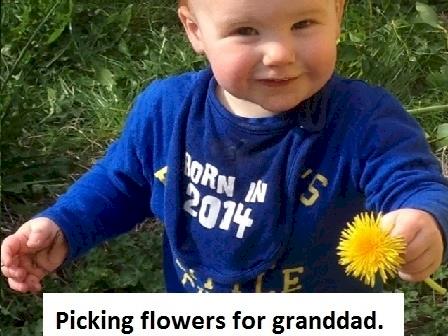 Living with heart disease always makes one hurry even though we maybe told to slow down but with Brian's 60th birthday and Xmas just around the corner he finds the urgency to visit our Son's family, especially his grandchildren, more pressing now, than ever before!

I want to give my husband of 40 years a trip to Ireland as some parts of his life have been unbearable and they have started to catch up to him mentally and physically.

Our grandchild to our oldest son is soon going to be 2 and has never met his grandparents. And is unlikely to without your generosity.

If I had to describe Brian I would say he is a man that has overcome seemingly insurmountable odds throughout his life. Starting with the unexpected death of his much loved mother due to heart disease, at the vulnerable age of twelve, a tragedy that has haunted him throughout his life.

Brian married at nineteen and before the age of 22 had two sons when his second son was only six weeks old Brian was involved in an horrific traffic accident while working for a branch of the New Zealand Post Office leaving him with multiple injuries and crushed feet which altered his life's choices. This affected the rest of his life and does to this day.

Since 2004 Brian has suffered several heart attacks and coupled with the injuries to his legs and feet life has become a struggle. While Brian has always been there for me and our four sons and grandchildren I would like to be there for Brian and enable his dream of seeing his grandchildren and mothers twin sister whom he has never met become a reality for him.

As Brian will not directly ask anyone for help as he believes firmly that all of us have our own issues but I believe that Brian is worth me asking for on his behalf.

I am so humbled that there is a place such as Give A Little Foundation that could possibly help me make Brian's dream a reality. So from my heart I truly appreciate any donation from anyone who might understand what it is like to hunger for the cuddles of their grandchild or misses family overseas or has suffered the loss of a loved one.

I know I am unable to change what has happened to Brian but with your help we can make his future a happier one and help towards the costs of this once in a lifetime trip.

So your gift is an immediate help in us being able to plan our trip and we will be eternally grateful for your donation today.

I am Brian's wife.

Thank you to everyone who are so very kind and generous people starting off the donations!

Created by, and paying to a verified bank account of, Leonie Brogan on behalf of Brian Brogan
Page Moderated The page has been checked by our team to make sure it complies with our terms and conditions.

Want to get in touch with Leonie Brogan?