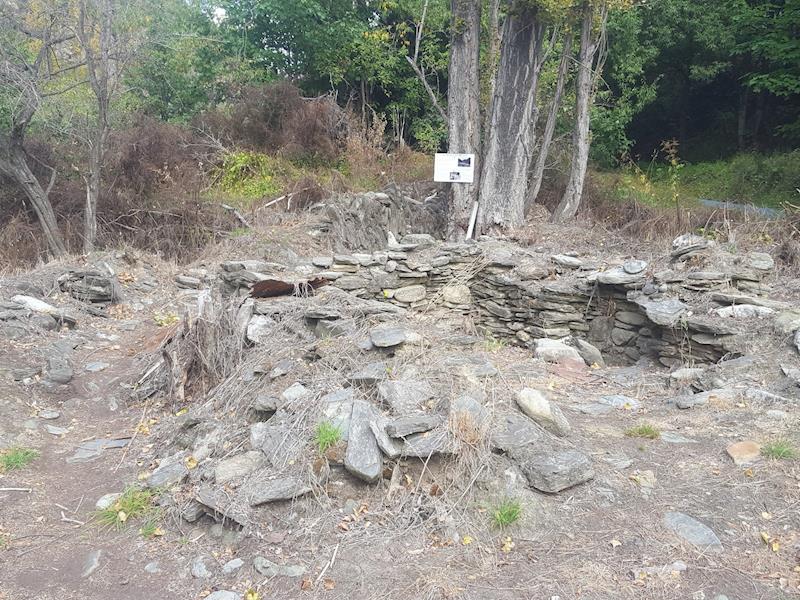 Closed Cause page created in the Community category by Jan Morrison

These ruins lie hidden, deteriorating, under a blackberry thicket. Their stories will be lost forever if we don't act.

1km up the Arrow River from Arrowtown, Central Otago, well hidden under blackberry thicket, lie the remains of a small settlement of 5-6 stone huts, from around 1900. I suspected there was an old hut in there and found it, 10 years ago. That hut is one hut from a small settlement called Copper's Terrace, easily viewed by all who pass by on the walking track and road to Macetown. It's important that we save it and perhaps reconstruct it to a similar high standard as that of the Chinese Village nearby, one creating a point of reference with the other, the story more complete. How amazing that would be, right?

Based on archival photos and local intel, the settlement was well established, with garden walls and an impressive entranceway, occupied by gold-mining families during the Arrow Goldrush. I know that unless I do something, this settlement and it’s stories will be forever lost. Local Heritage groups have neither the time nor the resources to save it, but I’m hoping if you generous kiwis out there give me a hand, together we can make it happen.

I already have the support of Heritage groups, DoC and locals, and an Archaeological Authority to do the work. All I need is the funds to clear the vegetation to see what else is there. Then, with help from volunteers, we should be able to make a start before winter to clear the site.

Your support gratefully received. This is a not-for-profit, community-based venture.

All funds raised will be paid into the Cooper's Terrace Project bank account and used to cover expenses only. Any surplus will be used to reimburse personal expenses that have been used to get the project to this stage.

To my wonderful donors

Unfortunately I have not been able to raise enough funds to start clearing vegetation in March as I'd hoped. As well as giveALittle, I had been working hard at it e.g. asked local groups for support, an article in the local paper plus applied for grants. No joy. Turns out I need to get the site put on the Queenstown District Plan - then I might get more traction with funding, so I'm now focussed on that. As to GiveALittle ... your funds are secure in the CT bank account. We are only postponed, never beaten. I plan now to resume a funding push in the Spring, including GiveALittle, and hopefully will be able to get to Arrowtown and start work sometime after that. A huge thank you all for your support which has helped keep me going. I remain determined to save this site however long it takes. Thanks again. Jan

Created by, and paying to a verified bank account of, Jan Morrison
Page Moderated The page has been checked by our team to make sure it complies with our terms and conditions.