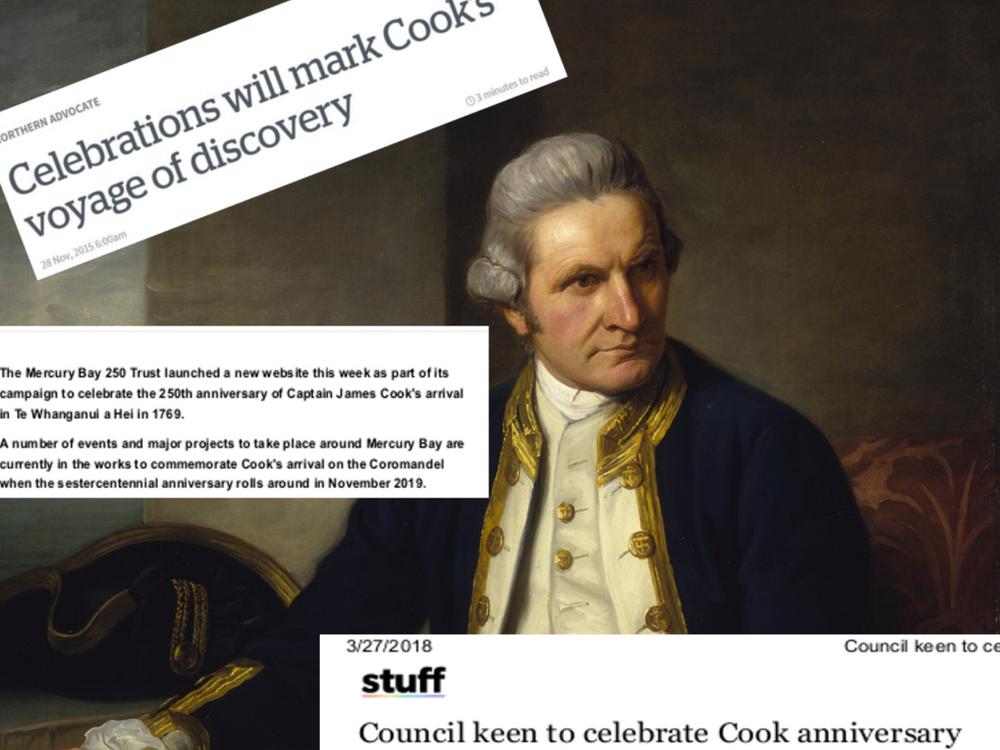 We will lay a complaint at the UN regarding NZs celebration of the Doctrine of Discovery, through the 2019 Cook Sestercentennial events.

In 2019, across the entire year, we will see a multi-million dollar publicly funded event to celebrate the arrival of Captain Cook in Aotearoa New Zealand.

I am raising money to travel to the United Nations Permanent Forum for Indigenous Issues to formally lodge a complaint of these publicly funded events as an inappropriate celebration of the Doctrine of Discovery.

This first encounter of Cook's in Aotearoa included the murder of innocent local Māori, theft, and the kidnapping of Māori boys. This practice of murder, theft and kidnapping was recorded in the journals of Captain Cook himself, as well as Joseph Banks. This was not new, and in fact this was just the first instance of multiple voyages across our region that were characterised by murder, kidnapping, theft, rape and infection, devastating communities across the Pacific. Of course - this also incepted a much broader experience of British colonization that continues to negatively impact Maori and Pacific Island nations to this very day.

The purpose of Cook's voyage to the Pacific was to seek out the "Great Southern Continent", establishing trading posts, and claiming land as he saw fit for the British Crown. This he did through raising his flag in numerous spaces in Aotearoa. Cook then continued across the Pacific - declaring Australia "Terra Nullis" and claiming it for the Crown, naming Hawai'i the "Sandwich Isles" and Niue the "Savage Isles", kidnapping, killing, stealing from and infecting Indigenous populations as he went. These early voyages of Cook occurred within the context of the "Age of Discovery" which set a precedent of European entitlement to Indigenous territories, bodies, and possessions that continues to this day, in the form of settler colonial governments and the extractive industries they aid.

It is entirely inappropriate that the New Zealand government is investing millions of dollars in celebrating this event, when so much more investment is still required to support the impacts of colonization upon the Indigenous peoples of Aotearoa and Te Moananui a Kiwa (Pacific). It creates a false impression of reconciliation while lands still remain stolen, structural racism is still prevalent, and Māori are still denied full rights to our own culture, language, health and freedom. Lt. James Cook was a naval officer, on a naval vessel, seeking to expand the British Empire. His arrival and actions in Aotearoa constitute an act of war upon our Indigenous nation (followed by many others across the Pacific). This culture of utilising the military against Indigenous peoples in order to gain access to their territories and resources continues to this day.

The 2014 UN Report on the thirteenth session of the Permanent Forum for Indigenous Issues reaffirmed that "all doctrines, including the doctrine of discovery, that advocate superiority on the basis of national origin or racial, religious, ethnic or cultural differences are racist, scientifically false, legally invalid, morally condemnable and socially unjust and should be repudiated in word and action."

The proposed events of 2019 are in direct violation of this affirmation, and so I am seeking to place this complaint before the UN Permanent Forum of Indigenous Issues as proof of New Zealand's failure to repudiate the actions of Lt. James Cook, as recommended in 2014.

All funds raised will go towards flights and accommodation while at the United Nations, New York.

The money will be spent on flights and accommodation in New York. Surplus funds will be spent in support of Indigenous Peoples attending the Permanent Forum in pursuit of their rights.

Created by, and paying to a verified bank account of, Tina Ngata
Page Moderated
The page has been checked by our team to make sure it complies with our terms and conditions.

Want to get in touch with Tina Ngata?