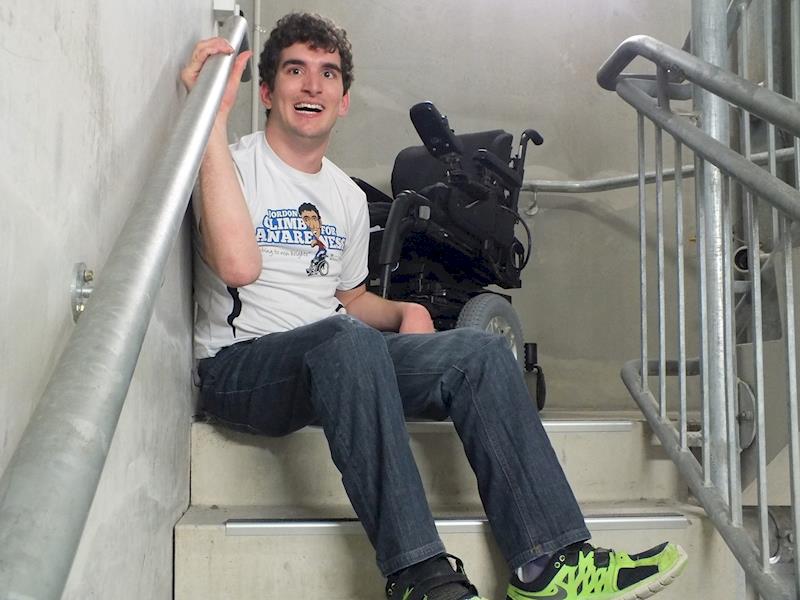 Given by 123 generous donors in around 6 months

You want to make a difference. I know this because I believe every person wants to make a difference – I know I do! I’m sure you come across people every day who walk around with ease, enjoying life without a physical hindrance. However, there are people all over New Zealand and throughout the Pacific Islands, including myself, who struggle with this most simple of tasks – walking. I was born with Cerebral Palsy, a condition that affects my gross and fine motor skills such as walking and causes spasticity and imbalance, but I never let that stop me.

My journey, Jordon’s Climb for Awareness, started with a dream at 3am, and soon became a life goal – to help young people living with disabilities in the Pacific Islands and raise disability awareness, all by climbing the world’s tallest towers.

You could say I’ve got a habit of conquering goals, having done so since I was young. However, I set myself my biggest challenge so far when I decided to climb the 1029 steps of Auckland’s SkyTower. That set off a chain of achievements, including:

• Gaining over 21,000 supporters worldwide on my Jordon’s Climb for Awareness Facebook page

2017 is set to be a hugely exciting year, with the Empire State building run up already planned taller than before. This once in a life time opportunity will see me climb the most famous building in the world. King Kong type climb. Breaking records and stereotypes with every steps.

I have been working and saving the little income I can, however this trip will cost about $12,234 (yes, I did the numbers), this includes airfares, a support teams, $3,000 donation for CAF and to buy more wheelchairs of course.

I’m seeking any amount, small or big… this climb is my dream come true.

I am truly grateful for your support.

Created by Jordon Milroy, paying to a verified bank account of Jordon Milroy on behalf of wheelchairs for the Pacific
Page Moderated The page has been checked by our team to make sure it complies with our terms and conditions.

Given by 123 generous donors in around 6 months