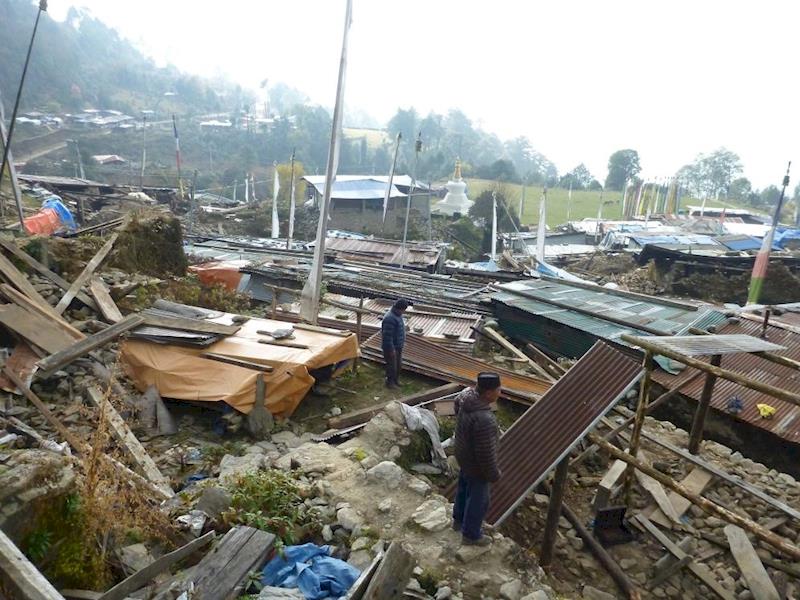 Closed Cause page created in the Disaster category by Bryan Scott for "Langtang Management and Reconstruction Committee and Tarkeghyang Community & School (Lama Nima)."

Given by 13 generous donors in around 5 months

On April 2015 a massive earthquake hit Nepal resulting in over 9000 people killed, 23,000 injured and hundreds of thousands made homeless. Near the epicenter of this earthquake are two remote communities (Kyanjin Gumba & Tarkeghyang) in the Langtang and Helambu districts of the High Himalayas that have been severely impacted and need support. Both Kyanjin Gumba & Tarkeghyang are relatively isolated from potential support networks however have functioning groups that appear capable of driving an improvement program principally themselves if assisted with funding. Kyanjin Gumba is a remote community (no road) with many tourist guesthouses and animal grazing. Tarkeghyang has road access and a garden/crops farming. The respective groups in Kyanjin Gumba and Tarkeghyang are the Langtang Management and Reconstruction Committee and a local Lama Nima with community representatives. Initially our preference was to be quite specific about the scope of any support (eg solar hot water systems) however this assumed a significant amount of funding would be raised. This Langtang Nepal Earthquake Givealittle is a realistic first steps campaign established on the basis that donations go to both community groups (Kyanjin Gumba and Tarkeghyang) to spend on Infrastructure and Schools where they recommend at this time. We encourage individuals and groups to support this initiative in Nepal’s hour of need. Dr Stanley Mulvany and Bryan Scott will to their best abilities pass on 100% of all donations provided.

Between 17 November and 6 December 2015, Dr Stanley & Bryan Scott assisted by Govinda Sapkota, Suresh Regmi & Sanjaya Silwal trekked in the Langtang and Helambu districts of the High Himalayas. ie Tamang Heritage Trek, the Langtang Trek to Kyanjin Gumba, a winter ascent of the Kanga La Pass, the Kanga La, Naya Kang Trek to Tarkeghyang, then to Yarsa, Okhreni and finally Nawalpur. This path was selected because it was remote, was impacted by the April 25th earthquake and may not be well supported by Government and Non Government Organisations.

We completed surveys on both sides of the Ganja La Pass (Kyanjin Gumba & Tarkeghyang). The surveys completed in Kyanjin Gumba were generally from individuals, although a crowd would often be formed. We also met with the Langtang Management and Reconstruction Committee in Kathmandu. Feedback in Tarkeghyang was from an individual School Teacher / Principal and from the local Lama who was a young, smart and recognized community leader who had assembled other community representatives with him.

We are now fundraising to support these isolated communities in a small way in their hour of need.

In November and December 2015 Bryan Scott and I went to Nepal to visit some of the worst affected earthquake regions in the Langtang and Helambu. What we witnessed was devastated villages and communities. We interviewed local people and community leaders and planned to raise some money for 2 villages in that region: Kyangin Gumba and Tarkeyghygang. In May we started a “Givealittle Nepal Charity “ and after raising $4000.00 we closed it in September.

We have recruited Anu lama, a project officer for Nepal Trust (www.nepaltrust.org) to oversee the money destined for Tarkeyghyang, to liaise with the community leaders and to use the funds for a computer and school supplies. Nepal Trust are rebuilding the local school which was demolished in the earthquake. We have sent over $2000.00 NZD = 153,460 NPR to her and there is an expectation that we will be informed as/when the money is spent.

With more difficulty I have established communication with the Langtang Management and Reconstruction Committee (Lhakpa Janba, secretary) and they have agreed that the money will be spent on solar hot water for an old age home to be built next year in the Langtang. We have remitted $2000.00 NZD = 153,529 NPR to the LMRC for this project. We expect we will be informed when the funds are spent on the project.

We want to thank everyone who contributed to the Charity for their generosity. Even a small sum of money goes a long way to helping people in need like in the Langtang and Helambu. May God bless you all.

Created by, and paying to a verified bank account of, Bryan Scott on behalf of Langtang Management and Reconstruction Committee and Tarkeghyang Community & School (Lama Nima).
Page Moderated The page has been checked by our team to make sure it complies with our terms and conditions.

Given by 13 generous donors in around 5 months