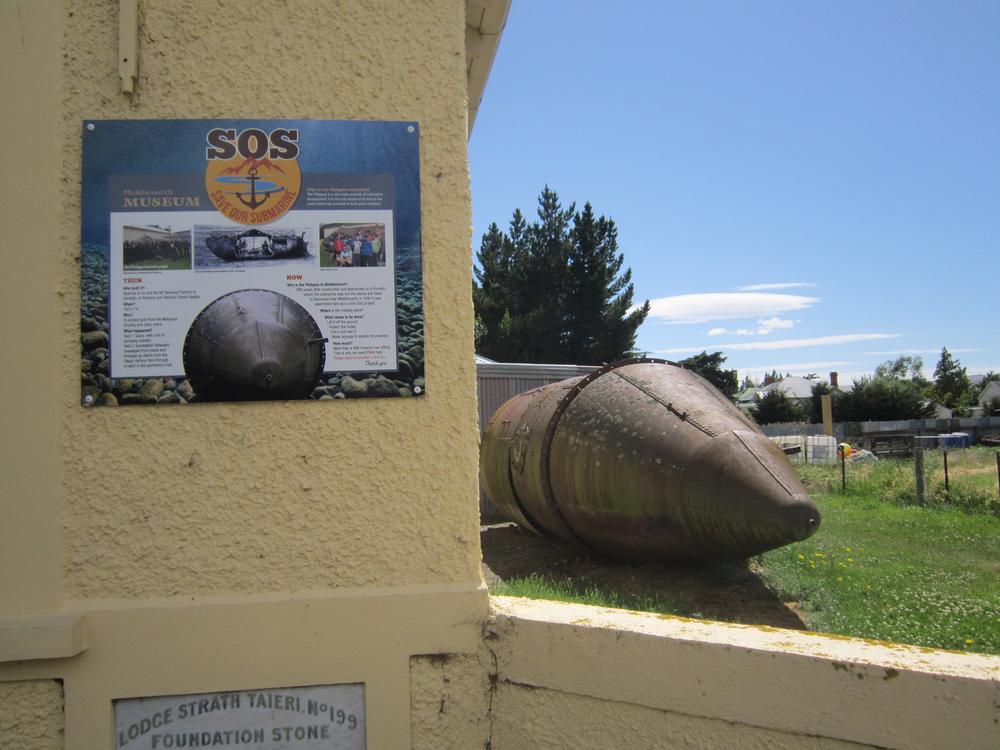 Save our submarine. The Platypus constructed in 1874, is now located at the Middlemarch Museum. Money is required for conservation.

This fascinating relic from our industrial past, located at the Middlemarch Museum, is probably the only submarine built in New Zealand. Created in Dunedin in 1873 to a French design, it was intended for gold mining in the Clutha River. Although it was trialled successfully in the Otago Harbour money ran out. It languished on the wharf in Dunedin until being taken to Barewood, near Middlemarch, in 1924. The Platypus is one of only two submarines of its vintage known to be still in existence, world wide. Consequently, it has attracted national and international attention.

The Strath Taieri Historical Society runs the Middlemarch Museum where The Platypus is located.

The Strath Taieri Historical Society runs the Middlemarch Museum which collects and cares for Strath Taieri artifacts and shares their stories.

Funds raised will be used to lift it off the ground, clean and protect the surface, cover with a roof and provide signage to tell its intriguing story. We are only requesting part of the overall cost.

Last week was very exciting. Rose Evans, conservator from Auckland spent three days in Middlemarch gathering information for the conservation plan for the submarine. A public meeting, unexpectedly, brought a great grandson of the submarine builder to our township. Discussions with interested firms have begun.

Sophie Mexted on 05 Aug 2017
Thank you for your assistance with my recent project. I hope you are able to restore The Platypus as desired.
$40

Marilyn Jill Webb (nee Dreaver) on 15 Jun 2017
My mother was an Elliott and trying to trace history and Dawn been very helpful. Thanks
$50

Guest Donor on 11 Apr 2017
Hi, my apologies to only be donating a small amount, but i really don't have much income to spare. At least please see this a donation of my ongoing support to the cause and my faith in everyone involved who have been working for this project. Cheers - jo
$20

Created by, and paying to a verified bank account of, Strath Taieri Historical Society (Charity)
Registered Charity
A Registered Charity has legal recognition under the Charities Act 2005.
Tax credit
Donations of over $5 are eligible for a New Zealand charitable giving tax credit.
Page Moderated
The page has been checked by our team to make sure it complies with our terms and conditions.

Want to get in touch with Strath Taieri Historical Society?