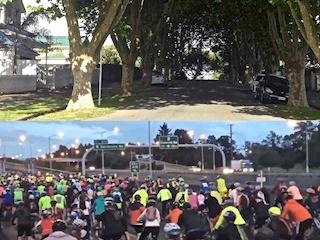 Help save Northcote Point and Westhaven

$15,635 donated
Given by 29 generous donors in around 7 months
Share Closed

We need help to reverse Council’s resource consent for SkyPath, via our appeal at the Environment Court.

SkyPath is a proposed pedestrian and cycle pathway that attaches to the Auckland Harbour Bridge. Its purportedly private developer relies wholly upon Council’s underwrite and funding, to implement its proposal.

The ten associations and groups that object to SkyPath, support the idea of people getting across the harbour on foot or cycle. What we object to, is the way the developer and Auckland Council propose to achieve that objective.

Viable alternatives exist, which both work far better than SkyPath ever could and which cause no detriment to any suburb. Additionally, Council’s and the developer’s claims that SkyPath is financially self-supporting, are grossly untrue and obviously so.

That is why we recommended a proposal that serves the same function as SkyPath, but does so in a way that safely separates pedestrians from cyclists, is readily accessible, safe, free to use, appropriately managed (by NZTA like all state highways are) and would operate on infrastructure that is already paid for, at no cost to Auckland’s ratepayers. The currently consented SkyPath proposal meets none of those criteria and in reality, would needlessly cost Auckland’s ratepayers hundreds of millions of dollars failing to do so.

The matter is before the Environment Court, so that Court will decide upon the many other functional concerns we hold about the SkyPath proposal. Those concerns include SkyPath’s very serious safety hazards and its comprehensive failure to comply with any of the key council regulations and statutory requirements routinely required of all such facilities, when the promoter is other than Council itself.

SkyPath’s developers claim that SkyPath will be the most intensively used tourism and leisure facility in Auckland and probably, in NZ. They say it will gain 60% more patronage than SkyTower, 100% more than Milford sounds and will better the patronage of the World famous London Eye, in its first year of its operation. They also claim that SkyPath’s patronage will grow at a rate that is between twice to four times the growth rate enjoyed by all its obvious competitors.

That begs the question as to why SkyPath could ever hope to attract Eden Park levels of patronage and patronage equivalent to the Museum’s Anzac Day crowds - every summer weekend day - when SkyPath could never hope to be better than a mediocre tourism attraction, by comparison with its competitors.

SkyPath is effectively a short-term, politically driven extravagance that in our opinion, simply cannot accommodate the huge crowds needed for its financial viability, either on the pathway itself, or at the end of the cul-de-sac suburbs (Northcote Point and Westhaven), where its entries are located.

The attached video illustrates the real-time effects of the patronage density permitted by the current resource consent. That patronage density is plainly unmanageable, but is required and necessary - every summer weekend day - for SkyPath's financial viability.

In short, the currently consented proposal is set to be yet another multi -hundred million dollar white elephant, whose real cost has been declared by no-one and whose certain financial failure is currently intended to be met by Auckland Council’s ratepayers, via Council’s underwrite.

Northcote Residents’ Association Inc. (NRA) is working with all the associations and organisations directly affected by SkyPath, all of which object to SkyPath’s implementation and all of which agree with the legal stance NRA has taken in its objection to SkyPath. Those groups democratically represent more than 12,000 people, all of whom are directly affected by the wide-ranging detriment imposed upon them by SkyPath.

What we need now, and very urgently, is funding to pay for barristers to put our case both to the Environment Court and to Auckland Council.

Created by, and paying to a verified bank account of, Northcote Residents Association (Group)
Page Moderated
The page has been checked by our team to make sure it complies with our terms and conditions.

Want to get in touch with Northcote Residents Association?