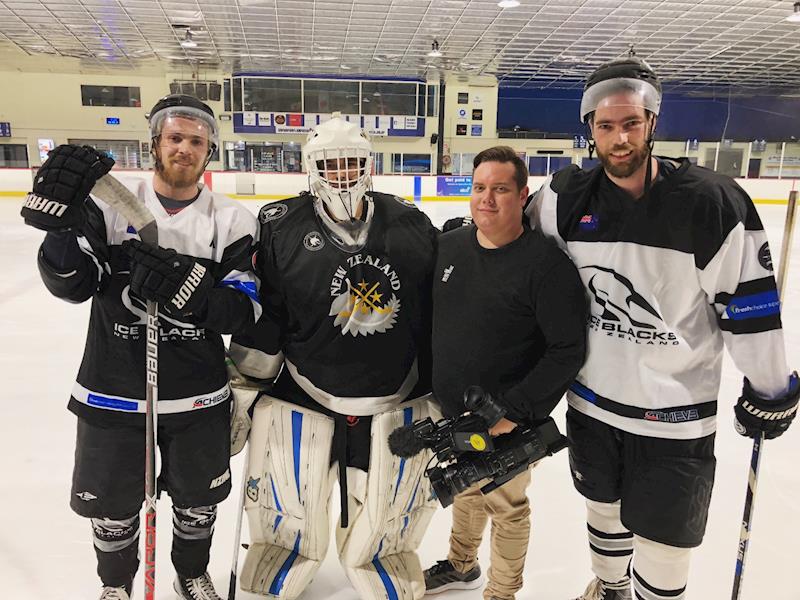 The New Zealand Ice Blacks are on a mission to win gold in Mexico City and they want PUCK YEAH right there with them documenting each step.

This year is shaping up to be a big year for New Zealand's national men's ice hockey team. After a historic series win over Australia at the 2018 Winter Games, the Ice Blacks are now aiming to win gold at the 2019 IIHF World Championships and gain promotion to the next tier of international competition.

With a strong determined squad, this goal is a very realistic possibility. For the past two years the Ice Blacks have finished in second place with strong outings against tough opponents. 2019 could well be the year for the men in black.

This April the team fly from Auckland to Colorado for an extensive training camp, followed by the IIHF tournament in Mexico City where they will face Israel, Georgia, North Korea, Iceland and hosts Mexico.

Both the journey and the result are well worth documenting. By sending PUCK YEAH's Logan Swinkels along with the team as an embedded video journalist we will be able to provide regular reports from Colorado and Mexico, including: player/coach interviews, training footage, team excursions and potentially a documentary of the whole journey.

New Zealand news media will be provided access to interviews/footage for their own bulletins and websites in a bid to boost national interest in the team.

More high profile national sides, including the All Blacks and BlackCaps, can afford to send a video journalist with the team in a 'Media Manager' capacity to do these same tasks and regularly do so. However with ice hockey being a minority sport, the players must fundraise and pay their own way, and we are doing the same because PUCK YEAH believes in this team.

PUCK YEAH is a small operation that is largely funded from our own pockets and we have never previously asked for money from New Zealand's passionate sporting community. But while this opportunity to travel with the Ice Blacks is too big to pass up, we need your help! This fundraiser aims to offset the costs that will incur during our mission to provide such extensive coverage of the Ice Blacks' international campaign.

Logan has previously worked for Newshub and The Crowd Goes Wild. He launched PUCK YEAH with close friend Joseph Durie (Radio Hauraki) in 2017 to help ice hockey grow in New Zealand by covering the NZIHL, women's hockey and the NZ representative teams.

There is sponsorship opportunities available for larger companies if they are willing to invest in this cause, including having particular videos (ie. game recaps or daily reports) feature their logo/branding. For more information, please contact Logan Swinkels: swinkfilms@gmail.com

Donations will help cover flights to Colorado and Mexico, plus travel insurance for camera gear. As a freelance video journalist, volunteering his time for this trip will see Logan miss out on 3 weeks of work and there are still bills/rent to pay.

Mt Barker Entertainment on 01 Apr 2019
Did you know that the original name for Pac-Man was Puck-Man? You'd think it was because he looks like a hockey puck but it actually comes from the Japanese phrase 'Paku-Paku,' which means to flap one's mouth open and closed. They changed it because they thought Puck-Man would be too easy to vandalize, you know, like people could just scratch off the P and turn it into an F...
$210

Dev on 29 Mar 2019
If I pay extra will you take Joe Dirt with you and leave him there?
Private

Created by, and paying to a verified bank account of, Logan Swinkels on behalf of Puck Yeah NZ
Page Moderated The page has been checked by our team to make sure it complies with our terms and conditions.

Want to get in touch with Logan Swinkels?