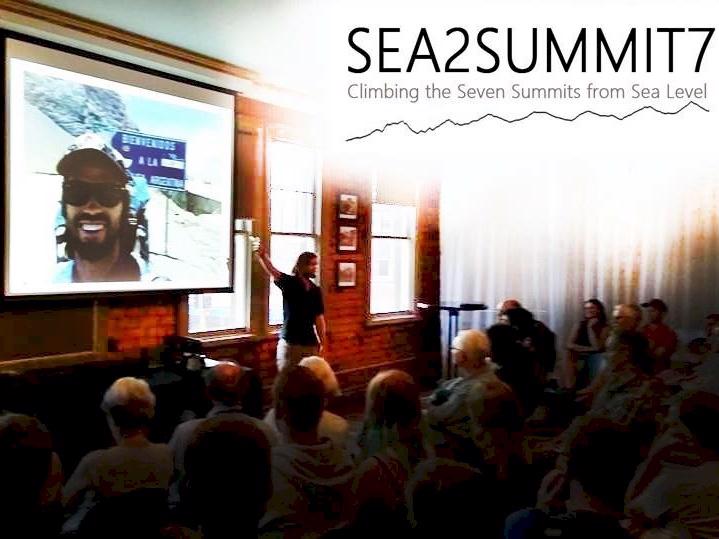 To become the first person in the world to climb the highest peak on every continent from sea level! Raising funds for male mental health.

My life recently came to a crossroads where I was desperately searching for a fresh adventure that would see me both travel the world and test my limits. My good friend Ryan invited me on a sea to summit of Mt Taranaki from the west coast, it was on this adventure where he sparked the idea of sea2summit7.

The overall goal is to become the first person to climb the highest mountain in each continent from the nearest feasible coastline. So far, I have been to Tanzania in 2013 where I ran 9 consecutive marathons followed by a five day climb to complete the first ever sea to summit ascent of Mt Kilimanjaro. I also tackled Mt Kosciuzko in Australia, where Ryan and myself completed the 225km south to north sea to summit over 6 days.

In July 2014 in an epic 14 day battle I completed the first ever sea to summit ascent of Mt Elbrus in Russia from the Black Sea on the Georgian coast.

In January 2013 I was unsuccessful in my first sea to summit attempt as I was forced to turn around on my final summit push of Mt Aconcagua (Argentina) on day number 28.

This coming January I will return to Mt Aconcagua to once again attempt the summit. I will use the money raised in this campaign to finally conquer the mountain that previously eluded me. This time I will knock the bastard off!

WHY I’M DOING THIS:

My aim is to raise awareness for mental health. As a school health teacher I have seen first hand the importance of this issue as well as recently having two friends lose their fight against depression. During these adventures I have found myself in extremely fragile mental states and had to dig deep to continue when all I wanted to do was give up. I have experienced first hand how powerful and deceptive the mind can be.

WHAT THE FUNDS WILL BE USED FOR DURING THE NEXT ADVENTURE:

- Flights and transfers for myself and support person/cameraman $6600

3. Mt Everest (Asia) 32 consecutive marathons followed by a two month climb to the roof of the world $85,000

All backers will be able to follow and share my journey through my blog and Facebook and become a part of a world first. And, because Mike Boston will document the entire journey, you'll have a front seat view!

“two roads diverged in a wood, and I took the one less travelled by, and that has made all the difference” Robert Frost

My name is Dave Williams, I’m 30 years old and live in New Zealand. I have always had a passion for the outdoors and much to my mother’s chagrin, never once came home in clean clothes from a young boy. As an adult I have fostered this into both a career and a lifestyle, completing a degree in Outdoors and Leadership at AUT University and working much of the last decade in Health and Outdoor Education at Edgewater College.

I soon realised that this adventure was about more than just challenging myself, I wanted it to be about something bigger and better than that too. I had recently lost two friends, both with adventurous spirits, to depression and as a school health teacher I have witnessed daily the importance of the issue that is male mental health in New Zealand. Too often we try to tackle all our mountains in life alone, brought up with the “she’ll be right” attitude and thus prevented from asking for help.

Guest Donor on 17 Dec 2016
Dave, you're mad, but, inspiring, and supporting a great cause. Well done on what you've accomplished so far. Be careful not to do yourself mischief, and all the best for knocking those 7 bar stewards off!
$200

Created by, and paying to a verified bank account of, Dave Williams (Sea2summit7)
Page Moderated
The page has been checked by our team to make sure it complies with our terms and conditions.

Want to get in touch with Dave Williams (Sea2summit7)?