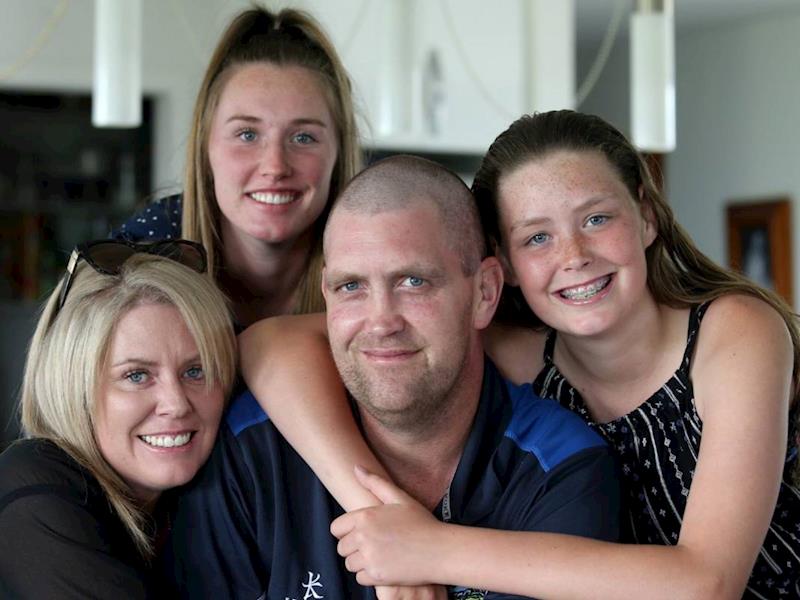 As Blair's journey comes to an end, this page has been set up to provide support for Missy & the girls in the next stage of their journey.

On 28th October 2018, Blair Vining received the heart-breaking news that he had incurable stage four cancer and was given just 6 - 8 weeks to live. Due to a 6 week delay before he could even get an appointment with an oncologist, Blair and his wife Missy decided their best option was to start a course of non-funded private treatments. They were determined to do whatever was necessary for Blair to have more time with his wife and their teenage daughters Della-May and Lilly. Although the non-funded treatments were extremely expensive - and not covered by their medical insurance - the treatments have bought Blair an extra 11 months of quality life that he would not have had otherwise.

During his first chemotherapy session, Blair and Missy drew up a bucket list of things Blair wanted to achieve before he died. Never one to do things by halves, Blair’s ambitious list included renewing his wedding vows, establishing the Blair Vining Sports Foundation to provide better access to sporting opportunities for local teenagers, an invitational rugby match and black tie dinner to raise funds for the Foundation, a petition for a cancer care agency to oversee improved cancer outcomes, a ‘Final Farewell’ event for Blair to say his goodbyes, and the launch of a charity hospital to address the shortage of specialised medical care in Southland. The Vining’s set up a Facebook page called ‘Blair Vining’s Epic Journey’ so friends could follow their progress and they gained nationwide attention through a number of media appearances. With plans for the Charity hospital now well underway, each item on Blair’s bucket list item has been ticked off.

Blair’s health has deteriorated and very soon we will farewell one of life’s genuinely good blokes – a man who has so generously dedicated his last months to make life better for other people. A husband, father, friend to many and hero to all will be gone before he turns 40. A dying man should not have to campaign for changes to a flawed health system or set in motion the plans for a charity hospital to achieve what a public hospital cannot, but with extraordinary tenacity and determination that’s precisely what Blair has achieved.

In recognition of all that the Vining’s have done for our local community and our entire country we think it’s time to say a big ‘THANK YOU’ and give a little back in support of this very special family.

The Vining’s story aired on the TVNZ ‘Sunday’ show on 28th July and can be viewed at:

We sincerely thank you for your support.

In recognition of the charitable work that Blair and Missy Vining have done for our community, we have established this Give a Little page to show our support for them through this difficult time.

Proceeds from the Givealittle page will be used to support Blair's family during this difficult time. Donations in excess of what is needed will be given to the trust fund of the Southland Charity Hospital

A celebration of Blair Vining’s life will be held at Stadium Southland at 11.30 am on Wednesday 16th October. Everyone is welcome – this is not a funeral, but a celebration of a legend.

Paying to a verified bank account of Melissa Vining
Page Moderated The page has been checked by our team to make sure it complies with our terms and conditions.

Want to get in touch with Claire Cameron?