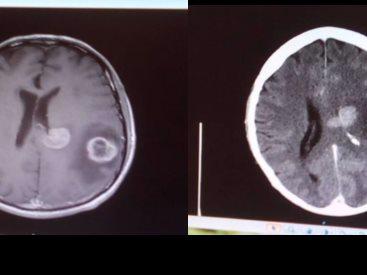 On Boxing Bay 2016 Tony was admitted to hospital with terrible headaches, loss of speech and weakness in the body. Tony underwent an urgent CT scan and MRI which showed up 2 very large tumours on the brain. The following day Tony have a more extensive CT scan which showed up 8 tumours. On the 30th December 2016 PN Hospital sent to Tony to Wellington Hospital to be seen by the Neuro Specialist. On New Year’s eve at 7pm Tony underwent Brain surgery to remove one of the easy tumours for Biopsy. The operation went well and was successful.

Tony progressed well after surgery and was allowed to come home to Palmerston North Hospital.

Sadly on Friday the 13TH January 2017 we went to an Oncology Appt to find out results. These results were definitely NOT what we were expecting. Tony was told without Chemo and Radiation that his survival rate was 6 Months or with the treatments he was given 12mths. Tony’s cancer is Grade 4 Aggressive cancer. The largest tumour the doctors cannot remove as it has grown and attached too deeply. Doctors have stated to us his cancer is the worst to get which ultimately is terminal.

On Tuesday 17th Tony had a day of meetings planning out his treatment plan. After 6 hours of appointments, getting mask made we came home where Tony has made the choice to not proceed with chemo or Radiation. He is however started on a few more alternative treatments.

With Tony being unwell, his wife Nicky and their daughters have carried on with Tony’s Racehorses and the day to day running of their small farm. Nicky has had to temporarily leave her job at Farmlands to help care for Tony and family and their Training Operation.

The cost of Tony’s treatments, travel, and Nicky standing down from her job have hit the family hard. We have decided to set up a Give a little page and Paypal account for anyone wishing to help, which will help with Tony’s treatments and also allow Tony and Family some much needed financial help during this hard time. Proceeds will also help Tony create memories with his Wife and their young daughters.

Links to the Give a little page and the paypal account for those wishing to help financially will follow.

Help cover costs of Tony Treatments,running of household bills and to help Tony do things with his family to create memories..

Guest Donor on 25 Mar 2017
I wish I had more $ to give, but hopefully many small contributions add up to a big help. I do however have plentiful positive thoughts and vibes i'm sending directly to you and yours ❤ A xx
Private

Vicky on 22 Feb 2017
Our thoughts are with you and we are here at any time if you need us. Stay strong and spend as much precious time together. XXOO
$100

Karyn and Kevin on 10 Feb 2017
Sending positive thoughts to you and your family.
$40

Created by, and paying to a verified bank account of, Nicola Kaye on behalf of Tony and Nicky kaye and their Daughters
Page Moderated
The page has been checked by our team to make sure it complies with our terms and conditions.

Want to get in touch with Nicola Kaye?